On the surface, the war waged by Mac's Local Eats earlier this week was a Facebook battle — a fight between people who'd never dined at the Dogtown restaurant (armed with one-star reviews) and its friends and fans in the community (who responded with five-star ones). But underneath all the passive-aggressive liking and sad reacts, the disagreement was about a fundamental difference in belief: Is there a humane way to kill an animal?

If you ask chef Chris McKenzie, the answer is yes. McKenzie, who operates Mac’s Local Eats inside of Dogtown's Tamm Avenue Grill, prides himself on dedicating the last ten years of his life to supporting "local, ethically raised and harvested proteins” from “the best farmers out there.” The steward for local eating is also the owner of CSA Mac’s Local Buys. A core value of McKenzie’s restaurant is making sure animals are treated fairly and don’t experience discomfort, even in their final breaths.

“Stress – that’s the thing,” McKenzie says. “The biggest difference between a humanely raised animal and one that is not humanely raised is the day-to-day stress life on that animal. The idea is that every day of their lives is a great day including the last one, sans one little moment.”

On the menu of humanely raised meats for July 2: a pig roast.

“A pig roast is where they take not just the pretty pink packaging from the store, pre-wrapped for us with the face cut off,” Monik says. “A pig roast is the entire body of someone that was living, breathing and feeling, and more complex than our dog or a three-year-old. The fact that they were celebrating freedom and independence — with the Fourth of July right around the corner — by eating the tortured and murdered body of a sentient being, shows how disconnected we are.”

So Monik, along with roughly fifteen other activists, showed up to the July 2 event ready to make a statement. Monik says demonstrations by Direct Action Everywhere have three main purposes: to mobilize and inspire “the lonely vegans,” to spread awareness, and to generate conversation.

“We want to get the issue of animal rights on the table,” Monik says. “A lot of people avoid this, especially with simple leafleting — you can throw that in the trashcan. But when you see an emotional, graphic demo, you’re going to go home and talk about it.”

Clad in pig masks and fake blood, the group brought signs and started chanting outside of the restaurant. When McKenzie called the police, they moved across the street.

“They had a gal on a table covered in fake blood and another gal stabbing her with a knife saying, ‘There’s no such thing as humane slaughter,’” McKenzie says. “I was like, ‘What the hell is going on?’”

That kind of emotional reaction is what the group was going for, Monik says.

“People were very disgusted by fake blood and a fake knife, and they were very scared,” Monik says. “It just kind of goes to show that if this bothers them that much, then they should see a slaughter house.”

Unlike many restaurants focused on sustainability, however, Mac's Local Eats is not a hushed temple to mindful eating. It's located inside a boisterous neighborhood bar. Perhaps not surprisingly in light of that, some customers reacted badly. One man, Monik says, even assaulted her.

“[The customer] turned around, came towards me and swung at me,” Monik says. “He hit my megaphone and if it wasn't my megaphone it would've been my face.” (Says McKenzie, "Those patrons are not under my command.")

Nevertheless, after the July 2 protest, the activists packed up and moved on to continue their weekly demonstrations at other local spots. That is, until one bad Facebook review of the restaurant sparked a storm.

Dani Hudson, a vegan who is not affiliated with any group, says she was looking at the Facebook page for Mac's Local Eats after speaking with Monik, who is an acquaintance. She clicked the 1-star rating — "accidentally," she insists — but left no comment.

McKenzie, who’s used to receiving higher accolades, reached out to Hudson through the page, asking if she could tell him about her experience.

“It was an accident,” Hudson wrote back. “In all honestly, I will never set foot inside a restaurant that serves pig corpses.”

Cue the shitstorm! McKenzie responded that it was unfair of her to review a place she’s never eaten at. Hudson, who felt “ganged up on,” reached out to Monik. And, as Monik acknowledges, she then had her group swing into action.

“As vegans we wanted to defend her and show them we're not backing down, because if we come in a passive way, there’s no strength there,” Monik says. “So immediately the vegan army got up and said, 'Let’s go give him what we thought of his establishment.’”

After an influx of 1-star reviews with no comments, McKenzie explained the situation in a lengthy post on his personal page, which is open to the public. He asked patrons to counteract the negative ratings by posting a review.


“The response was overwhelming,” McKenzie says. “To say that I was humbled by it is an understatement. I didn’t see it coming and I couldn’t be more grateful for it.” As of press time, the restaurant's average rating on Facebook was back up to 4.9 out of five starts, with a staggering 314 reviews.

Added Stuart Keating of Earthbound Brewery, himself no stranger to online flame wars, "If you're going to eat meat at a restaurant, you would have to work very hard to find a place more careful in their sourcing of meat for ethical and environmental impact."

McKenzie’s biggest peeve was that the group chose to target his restaurant, of all places.

“I think that attacking the small guy, the local guy is not the way to do it,” McKenzie says. “I thought, 'Man, if you’re gonna protest somebody, protest the big concentrated animal farming operations and the people that support them' – which is most of the meat raised in the world.”

Monik says she receives this complaint often. Still, she retorts, her group does target these conventional farming businesses — they are “protesting all the time, everywhere.” A few weekends ago, she says, they did a fast food day, protesting five big chains including McDonald’s and Taco Bell. Even so, people weren’t satisfied.

Still, it may seem as though Mac’s farm-to-table burgers are at least doing something more than other operations. Though McKenzie says the idea of humane slaughter “isn’t a matter of opinion,” Monik seems to disagree, calling it a “sales tactic.” 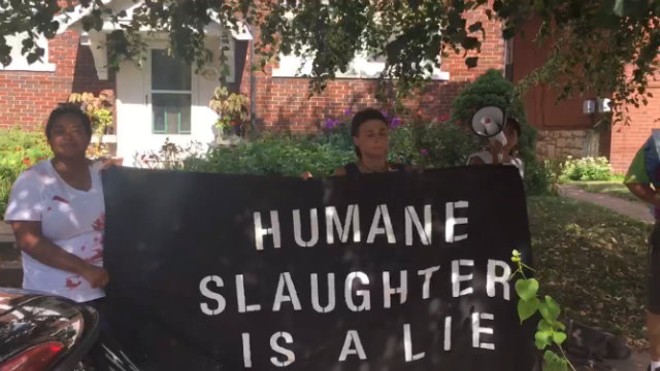 “You can’t put something happy and compassionate next to something evil. No matter what humane-certified, ethically-raised, grass-fed label they're feeding the consumers, it still comes from a place of violence,” Monik says. “We’ve investigated some of the ‘best farms’ in the country and it’s always the same thing.”

Regardless, McKenzie believes that he’s “almost on the same team” as Monik. The most important thing to him, he says, is that animals are not treated poorly.

“It affects the product but also morally, we shouldn’t treat animals like commodities,” McKenzie says. “I sell meat for a living, and I’m telling you to eat less meat and eat better-quality stuff. You should support the local producers who are taking the time do it right.”

And he believes strongly there's nothing wrong with a pig roast. In fact, they're hosting another one in September.