No, Eat-Rite Diner Is Not Closing, Owner Says 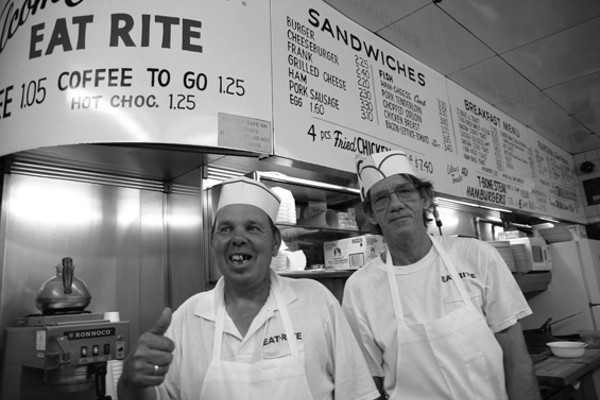 Reports of the death of Eat-Rite Diner (622 Chouteau Avenue) have been greatly exaggerated.

In recent days, obituaries for the beloved late-night hangout have gone viral online — with one Facebook post flatly stating the closure as fact ("can't believe Eat-Rite is closing for good at the end of September") drawing more than 770 shares as of press time. It got to the point that Eat-Rite's long-time cook, Pat Fell, says customers began to ask him about it. He himself was worried enough to call the diner's owners, L.B. and Dorcas Powers.

The good news is that it's not true. Eat-Rite has no plans to close any time soon, much less the end of September in particular, as Dorcas Powers assures the Riverfront Times.

The bad news, of course, is that eventually, all good things do come to an end.

"We're old," says Powers simply. "We should sell. But we don't think we can sell. And we don't know when we'll get too disabled, or too old to carry on."

The Powers, who are in their 80s, bought the business on the edge of downtown in 1970. (Best anyone can tell, it was already in its fourth decade as an all-night diner.) And while they've been happy to be its custodian, Powers suggests that any new owner might have to deal with some matters with City Hall, issues that are currently grandfathered in. She suggests a sale might simply be impossible. No more L.B. and Dorcas, no more Eat-Rite.

But no matter what you've read on Facebook, she says, the couple is not ready to pack it in. Not today, and certainly not anything that's been discussed for September in particular.

"This is the only place we have left," she says, referencing the multiple diners they used to own. "We're going to keep it going as long as we can keep doing it. We don't have any plans for anything. We just go from day to day.

"When you're in your 80s, you're just thankful to be standing up vertical," she adds.

So where did the misinformation begin? It's impossible to know for sure, though it is worth noting the timestamp on that Facebook post that's drawn so many shares: It was posted at 3:03 a.m.

See also: When It's 4 a.m., Go to Eat-Rite Diner for a Slinger — or a Reason to Love St. Louis Again