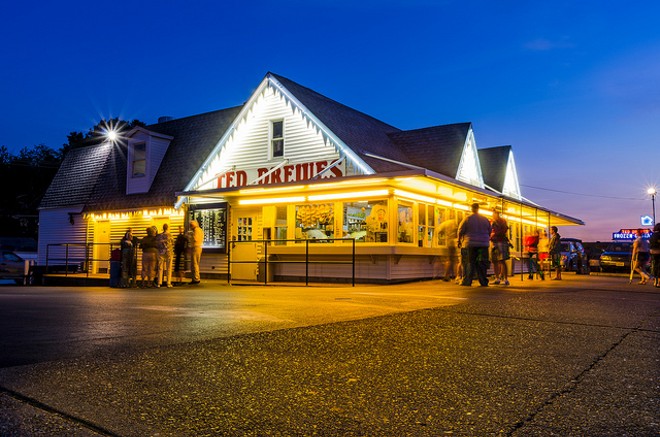 Yesterday, Buzzfeed, a favorite news source and time waster for millennials, published a listicle, "Here Are The Best Soft-Serve Places In The U.S." The authors explain that the list was built with a handy-dandy algorithm that examined the number of reviews and star ratings "for every brunch spot on Yelp." We have a feeling that "brunch spot" reference is a typo that was copy-pasted from a Buzzfeed brunch list of similar nature and was actually supposed to read "soft-serve spot," but whatever.

Anyway, the post goes on to name the best soft-serve spot in each state and Washington, D.C., along with quotes of praise from Yelp users. And the winner for Missouri? St. Louis' very own Ted Drewes.

Now, we can hear you protesting right now. "But Ted Drewes isn't soft-serve. It's frozen custard. There's a difference." And to that, we say: Yes, you are absolutely correct, and Buzzfeed writers need to educate themselves on the virtues of various Midwestern frozen dairy products.

But hey, we officially have yet another reason to brag about Ted Drewes. The post includes a couple of raving Yelp reviews — one praising menu items such as the "Terramizzou" and "Crater Copernicus" concretes, and another boasting about the custard stand's affordable prices and its status as an "original." Buzzfeed also tells uninformed readers that the concretes are what keep people coming back. They're not wrong — turning one of those frozen delicacies upside down is a rite of passage in these parts.

Of course, this isn't the first time Ted Drewes has been recognized on such a list, or incorrectly categorized as something other than frozen custard. Last September, was also voted as the best ice cream in the world on SoolNua's #worldICECREAMindex.

To see all of the winners (including ones that, yes, are actually soft serve!), visit buzzfeed.com.