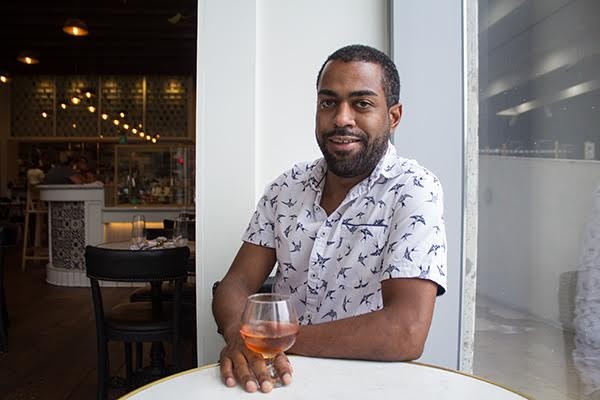 Phil Ingram, the head bartender at Sardella (7734 Forsyth Boulevard, Clayton; 314-773-7755), moved to St. Louis from Chicago to further his education. He just didn't expect he'd be doing that in a restaurant.

"I got accepted to Washington University's business school, but it only took me a semester to realize that my heart wasn't in it," Ingram explains. "Learning about how to make money for the sake of making money held no interest for me. I became that 'lost in the world' stereotypical college kid."

As he gravitated toward the subjects that held more appeal — history, philosophy, literature — Ingram also found himself being pulled into the restaurant business. He'd gotten a part-time job at Riddle's Penultimate Café & Wine Bar in the Loop, where he experienced a way of eating that was different than what he was accustomed to on the south side of Chicago.

"I grew up in a food desert, so this was a new experience for me," says Ingram. "Plus, I love history, culture and travel, and I realized that one of the easiest ways to find out about different cultures was to find out about what they eat and drink. It really opened my eyes."

Ingram, who calls his experience at Riddle's a "baptism by fire," worked his way up from bussing tables to managing the front of house and running the restaurant's bar program. A budding interest in cooking led him to the prep kitchen, where he found himself hanging out and learning how to incorporate that knowledge into the bar. "They really gave me a blank slate there," Ingram laughs. "Basically, I was able to mess it up at my own pace."

Ingram left Riddle's to work at the Delmar Restaurant & Lounge, a bar he briefly considered buying before he had a daughter and realized that the 3 a.m. life wasn't feasible for his new role as a father. He got into consulting work before landing at Basso, and then at two of Ben Poremba's Botanical Heights eateries, Olio and the now-shuttered Old Standard. At the latter, he put together the restaurant's impressive whiskey selection.

When he left Old Standard to work at Niche, Ingram found himself back in wine-focused territory — something he'd picked up working at Riddle's. Though he thrived in that environment, he's been enjoying the transition to Sardella and the way it has allowed him to branch out and have fun with cocktails.

"People just sit down and ask us to make them something," says Ingram. "I find out what they like, what they don't like, and just go from there. It's just cool to come up with something and see the glass come back empty. When you see someone come in looking beat down and they leave with a smile on their face — that's what ties everything together and makes hospitality and service so meaningful."

Ingram took a break from the bar to share his thoughts on the nobility of bartending, the virtues of sleeping upside-down and why you should just go ahead and make your own sour mix.

What is one thing people don’t know about you that you wish they did?
I don't know that anyone needs to know this, but let's call it "Fun Facts." I need the white noise of the city to get to sleep — traffic, random drunken neighbors playing loud music, sirens, trash trucks — and I prefer to sleep upside down on my inversion bed. It helps me decompress.

What daily ritual is non-negotiable for you?
I'm not big on ritual — religious, social or otherwise. I think every day is a new day. But I make a point to read for at least an hour daily.

If you could have any superpower, what would it be?
Most of my favorite people are dispersed around the world, so teleportation. It seems like the most efficient way to travel, see friends and get back in time to set up for service.

What is the most positive thing in food, wine or cocktails that you’ve noticed in St. Louis over the past year?
People viewing bartending as an honorable profession rather than a means to an end. Not everyone tends bar to put themselves through school. For a lot of us, food and beverage are where we've found our passion and what we've chosen to do.

What is something missing in the local food, wine or cocktail scene that you’d like to see?
I work nights (although not nearly as late as I used to), and I'm nocturnal by nature, so I've always wanted to open a really badass 24/7 diner with street food from around the world instead of slingers. Well, I did want to. Now, I want someone else to, and I will be there twice a week minimum.

Who is your St. Louis food crush?
That's tough, because there are a lot of talented people here. But one person that I constantly keep an eye out for is Natasha Bahrami of the Gin Room. I think that the passion she shows for her work is inspiring, and she's done as much in the role of ambassador for the profession here in St. Louis as anyone I can think of.

Who’s the one person to watch right now in the St. Louis dining scene?
Again, hard to just pick one. I'm obviously spoiled and biased because we have so many incredible people in our group, but every single time I'm in Taste or Brasserie I am utterly amazed at the scope and quality of food Brian Moxey and his crew are cranking out. Also, Cory King at Side Project has made some of the most ridiculously good beers I've ever had.

Which ingredient is most representative of your personality?
I'd say vermouth. It's kinda subtle but not necessarily shy. It can play the background or take over.

If you weren’t working in the restaurant business, what would you be doing?
The very first real job I had was working at the Chicago Mercantile Exchange. I actually started working there in high school and worked there every summer while I was in college. I still remember stepping into a trading pit for the first time and realizing that everyone was screaming and jumping over one another, but there was a definite order of things inside that chaos, right down to who stood where. When the restaurant is packed and the noise level is at eleven, that's when I'm most at home. There's order in that chaos. I can't imagine doing anything else. But you know, should I lose my sense of taste or something crazy, I'm still pretty good with numbers and analytics — I'd be proprietary trading maybe. Or farming.

Name an ingredient never allowed in your kitchen.
I like to think you can always make something out of nothing, so I wouldn't rule anything out. But I think store-bought sour mix is just being lazy.

What is your after-work hangout?
I live in the Grove, so if I'm hanging out after work it's usually at the Gramophone or the Ready Room. But I love the energy on Cherokee and try to get to Blank Space whenever I can.

What’s your food or beverage guilty pleasure?
Sour Skittles. And I don't feel guilty in the least. I f'ing love 'em. I just probably shouldn't eat as many as I do.

What would be your last meal on earth?
A shaved brussel sprout salad. A really good red curry (even though I’m allergic to coconut). A six pack of Tecate. A double pour of Pure Kentucky XO Bourbon. A pack of Dunhills. And bring on the Armageddon.