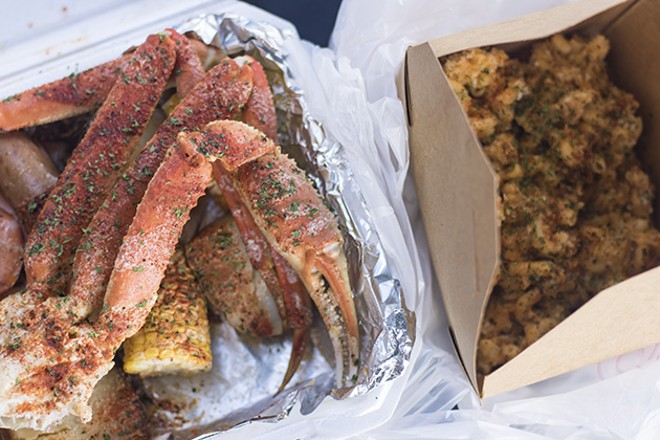 Crab shells are piling up in St. Louis, thanks to Shell City Crab Shack (1330 Aubert Avenue), a new seafood hotspot in the city's Fountain Park neighborhood that opened July 1. On the afternoon we visited, the place was packed.

Shell City is a small family-owned business, and chef and owner Ryan Martin wanted to keep the menu simple. The dishes are, however, by no means small. The "Original Platter," for example, includes two corn, two sausages, ten shrimp, potatoes and five crab legs — all for $26.50.

Or, if you’re a fan of crab cakes, try Shell City's crab cake platter, which comes on a bed of greens with Cajun remoulade sauce, a side of sweet potato casserole and a side of seafood mac and cheese, oh my! Again, it's a lot of food, and it's also for $26.50.

For Martin, Shell City Crab Shack is not his first business. He previously worked in the real estate industry for three years in the Black Diamond Investment Group, traveling to Texas, Louisiana, California and the East Coast. But those trips led him towards a different path. After getting a real taste of the sea, Martin brought back the inspiration to whip up his own recipes.

Crab legs are the best seller, and Martin proudly proclaims, “Shell City Crab Shack has the best crab legs in the city.” The seafood mac and cheese is a close second, he says, though his favorite the lobster tails.

However, there are plenty of other options, including a sweet potato casserole — and even caramel mini cakes for dessert.

Although the place is primarily a to-go restaurant, and tables give customers a place to wait. The décor fits with the restaurant's soundtrack, with album-related art on the brightly painted walls honoring hip-hop artists Jay-Z and Dr. Dre.

After growing up in the north city neighborhood where the restaurant is located, Martin was inspired to bring something great to the table for others in the community. His love for seafood and his passion for cooking became the ultimate ingredients in Shell City Crab Shack. Martin adds "I want to cater to every area and all walks of life," and he plans to do just this with one or two or three dishes at a time.
Shell City is open Tuesday through Saturday from 12 to 8 p.m. and Sunday from 12-6 p.m. It's closed on Monday.