If you're looking for a place to party before (or after) the Cardinals' game, some live music downtown or just some Southern-inflected food in a laidback atmosphere, Tin Roof (1000 Clark Avenue, 314-240-5400) has you covered.

The Nashville-based concept quietly opened its doors last weekend in the space that previously held J. Buck's — and it's a beauty. Three months of renovations have left the space with a down-home retro feel, no less than three bars and three distinct areas for eating and drinking. It could easily become a nightlife destination.

Zachary Johnson, the Edwardsville native serving as the general manager for Tin Roof St. Louis, says the idea is "Margaritaville meets Cheers" — "When you walk in, we call out, 'Hey, welcome to Tin Roof, sit wherever you want!' For everyone who's here, we just want you feel ... normal."

The place opens daily at 11 a.m. to serve the lunch crowd (10 a.m. on Saturdays and Sundays for brunch). Live bands will go on stage two hours before any Cardinals' home game or 9 p.m. on non-game nights. They'll keep rocking all the way to closing time, which is currently 1:30 a.m., although Johnson says the bar will be pursuing a 3 a.m. liquor license in the coming months.

For the most part, those will be cover bands to get the party going. But if DJs are more your style, don't despair: Large garage-style doors separate one-third of the indoor space from the rest. On many evenings, a DJ will play one part of the room with the band on the other side. There's also a large outdoor patio with a bar of its own.

Under executive chef Nowell Gata, the food is more ambitious than you might expect. Burgers include "The Southern," which is topped with pimento cheddar, fried green tomatoes, bacon and chow-chow and comes with a side of fries or tots for $12. Or try "The Rodeo" — a spiced patty topped with roasted poblano, Swiss cheese, ranch dressing and avocado.

Street tacos are on offer for $3 or $4 a pop with carnitas, chicken tinga, or even a "Korean-battered grouper" as the base. Or try the "Left Coast," which begins with tempura avocado for vegetarians.

Or try a "pub board" — options include everything from Nashville hot chicken (made famous locally at both Gus's and Southern) to Voodoo shrimp. You can add on two sides, including the house's beloved mac & cheese, fried pickles or even "Street Corn," an on-the-cob riff on the Mexican classic.

If all that sounds inviting, you might want to stop by tonight — or perhaps tomorrow morning for Tin Roof's first in a series of boozy themed brunches. This one is called "Michael and Mimosas," and features a DJ spinning Michael Jackson hits along with $15 bottomless mimosas, available all the way 'til 2 p.m.

Tin Roof doesn't even have its sign out front yet and has done nothing to publicize its opening. Yet downtown fun seekers have already been coming on in — giving the bar's new management team a good sneak peek at just how much St. Louis loves to party. Notes Assistant General Manager Tanner Huddleston, "We even got a great crowd for a Monday. We haven't had a night yet where I haven't seen people who don't love to drink."

Scroll down for more photos of Tin Roof. 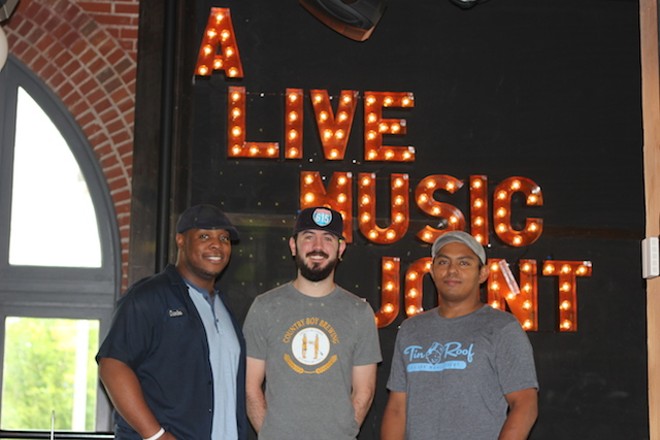 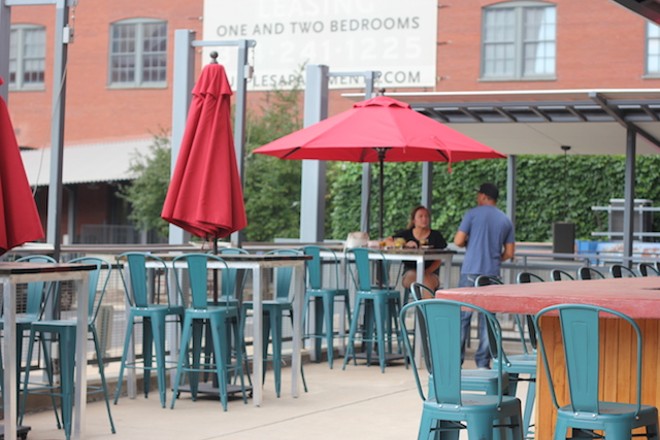