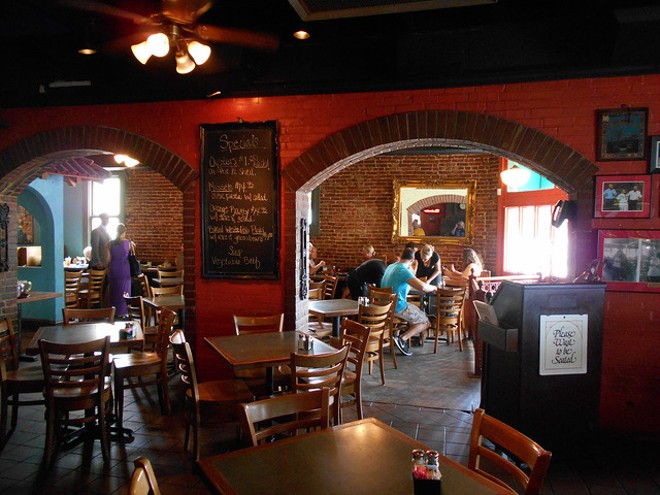 A Webster Groves man has filed a lawsuit against Michael's Bar & Grill (7101 Manchester Avenue), alleging that he relied on inaccurate information from servers in ordering its gyro salad — and that the gluten in the dish he ordered has left him with "severe and permanent injuries."

The details are left rather vague in the suit, which suggests the meat-topped salad led to near-catastrophe for Phillip "Gus" Wagner. His attorney alleges that Wagner was

Wagner's attorney, Christine Anderson of Faerber and Anderson, did not respond to a call seeking comment yesterday.

The restaurant's general manager, Katina Malliotakis, says that Michael's had no idea a customer was alleging a problem until they got a call from someone demanding to know their insurance company. The caller claimed that someone had told Wagner the gyro salad was gluten-free.

But Malliotakis says the restaurant has a special gluten-free menu, and the gyro salad is definitely not on it. She says she questioned the servers without revealing the reason, and they all confirmed that the salad is not gluten-free. "Nobody remembers a customer asking about the gyro salad, and all of them knew the right answer right away," she says. She notes that since another salad on the menu is gluten-free, any of the servers would have steered an inquiring customer toward that.

"We have plenty of gluten-free options if people ask for that," she says.

The restaurant, which specializes in Greek cuisine, has been an RFT "Best of St. Louis" winner for "Best Bar Food" and "Best Fried Mushrooms." Its "Michael Burger" has also been named one of our critic's 100 Favorite Dishes.