I Ate Everything on Dollar Express Chinese's Menu and It Only Cost $17.38 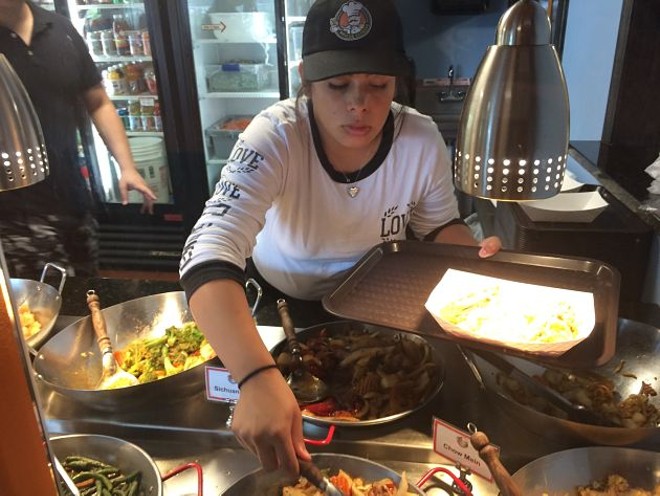 There's something about walking into a dining establishment and ordering one of every single thing on the menu that makes a guy feel like a real big shot. "Who is this man of tremendous wealth and considerable hunger?" the employees must whisper in the kitchen. "Surely a titan of industry, a mover and shaker who works as hard as he plays — and who develops one hell of an appetite doing it."

Such opulent displays of gluttony used to be reserved for only the richest fat people among us. But now that time is over. Thanks to Dollar Express Chinese (10041 Page Avenue, Overland; 314-731-6898), which opened May 3, you can have all the fun of pretending you're important and overeating a tremendous amount of food — and it won't cost you more than a twenty dollar bill.

The premise is simple, and familiar to anyone who has spent time in a Dollar Tree retail store: Everything in the building costs a dollar. Your food is served by the scoop (and a rather generous scoop at that). You can order as many scoops of as many items as you want.

This temple of vaguely Chinese economy dining is housed in the building that, until recently, was home to Scotty's Fresh Produce Market, on a busy stretch of Page Avenue near Ashby Road. A life-sized stuffed doll stands at the entrance to greet customers, although otherwise decorations are spare. Your first step in the door leads to a completely unfurnished square room meant to accommodate long lines of hungry customers. (At lunchtime last Thursday, this room was largely empty, though business remained steady.)

Through another doorway is the restaurant proper. An employee takes your order at the counter next to a long steam table loaded with the day's offerings. The items on offer change every couple of weeks save for some staples, which could be troublesome for picky eaters or those who have a favorite dish.

No trouble here for me though. Upon arrival, I immediately ordered one scoop of every single thing on the menu. The employees did not seem to think I was a big shot, though they could plainly see how fat I am. They filled my order with a chuckle. My total came to $17.38.

To keep costs down, food is served in paper trays — the kind that might house nachos or french fries in a cafeteria. My sixteen items fit neatly in three of these trays, with two styrofoam cups of soup on the side. All the food was piled in next to each other, which is good for keeping down waste but bad for being 100 percent sure which particular dish you are eating at any given time.

The food is roughly of the quality you might expect from an Americanized Chinese buffet, though it should be noted that it is much better than the buffet near my home that I stopped going to for being too gross — take that how you will. (Conversely, I will surely return to Dollar Express Chinese.)

My dining companion agreed with me on this point. "I'd rather come here than a buffet, because at a buffet I have to eat like fourteen plates to feel like I got my money's worth," he said between bites of black pepper chicken. "Here I can just have a couple things." There you have it.

If ordering only a couple things, you should definitely get that black pepper chicken — it is a standout. So too is that mall staple, General Tso's chicken. According to an employee these two dishes are customer favorites, along with the coconut chicken (I did not enjoy the latter, but I don't particularly care for coconut). He says those three items are likely to remain on the menu even as other items are rotated out.

The fried chicken, on the other hand, did not impress. The tiny wings are the type you'd normally find slathered in hot sauce, but here they are breaded and fried — apparently for a long time, considering the brittle bone snapped in half after only a couple bites.

The beef is a little problematic too, in that it is difficult to find. Sichuan beef was on offer the day I went, and presumably it was in my meal as well — but try as I might digging around in all of the trays, I found only one piece of the meat in my order. Impossible-to-chew dehydrated peppers were a-plenty in the dish, though. 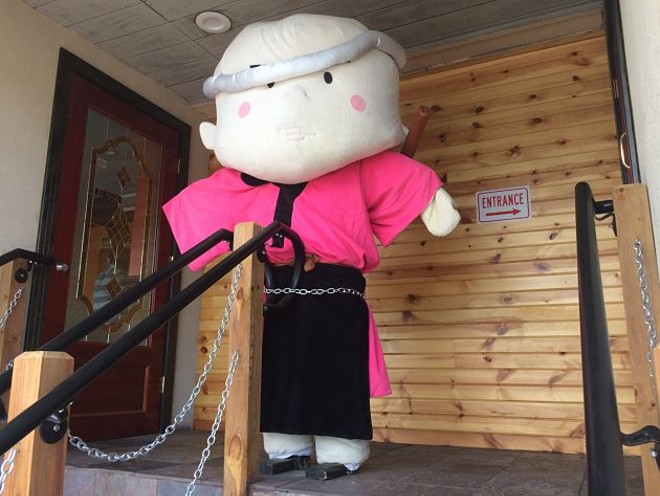 Still, I'd expected far worse. The idea of dollar-everything dining made me fear I'd be consuming some D-grade slop, but that was certainly not the case. Dollar Express Chinese is remarkably clean and the staff is friendly, and the food will more than satisfy your Chinese food cravings at budget prices. For $5 you could have yourself a fine and filling meal, with egg rolls and crab rangoon on the side and a drink to wash it all down.

But where's the fun in that? Go big; order everything on the menu. Seriously, where else in town would that even be an option?