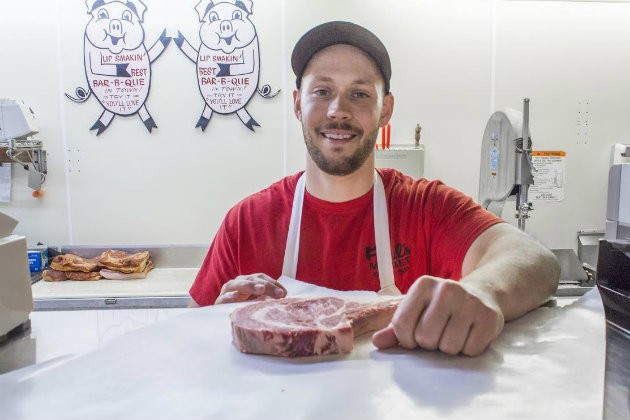 Before he was old enough to reach the stove without the assistance of a chair, Jerry McClure of Paul's Market (1020 N. Elizabeth Avenue, Ferguson; 314-524-3652) was his grandmother's little helper.

"My grandma was an entrepreneur. She had her own bakery, she always had a garden, and she'd let me grind her coffee beans for her," McClure recalls. "She introduced me to food at an early age and showed me how it can put a smile on people's faces. She was an inspiration."

As he got older, McClure spent less time in the kitchen — until he found his way back in the most unlikely of places. "My first paycheck job was working at McDonald's," says McClure. "It's not elaborate or local or cool gastronomy or whatever, but it was fast-paced and demanding. I'm a big adrenaline junkie, so when I see lines of people demanding the best of me, it gets me going."

McClure pursued a job in construction after graduating from high school and did his general education requirements at St. Louis Community College at Florissant Valley. When he needed another job, he looked to Paul's Market for a simple reason: It was close to his house. However, once he starting working at the five-decade-old butcher shop, his eyes were opened by the level of hospitality offered by such a humble place.

"Gary [Crump] became a mentor to me," McClure explains about his boss, the owner of Paul's Market. "At first, I didn't see it as a long-term thing, but I've been here six years now."

Following community college, McClure enrolled in Saint Louis University's biomedical engineering program. However, his experiences at the market prompted him to switch majors to nutrition with a culinary emphasis. He also went through the university's entrepreneurship program. He was fortunate to have the market at his disposable while he was in school, and Crump let him experiment and incorporate what he was learning into his job. "The position I have now at the market grew with me," McClure explains. "I could do all of my learning hands-on. Gary really let me fly."

Now, as market manager, butcher and general utility player, McClure spends his days helping home cooks realize their potential, serving up cuts of quality meat — even as he believes that Paul's is part of a renaissance in specialty shops. "You can go into a big store and get everything you need for your entire life in one place, but I think people are getting away from that," McClure explains. "They're just not as excited to talk about things the way places like us, or Bob's Seafood or Goeke Produce are, though. We're not just workers. We're people who are passionate about what we do."

McClure admits that, as much as he loves food, it's this sharing of passion that attracted him to the business in the first place and is what's made him never want to leave. "Seeing a smile on someone's face honestly warms the heart," says McClure. "They don't even have to say 'thank you.' Knowing that I made someone happy doing something for them — the service aspect of the job — that's what makes my day."

McClure took a break from the butcher counter to share his thoughts on the St. Louis food and beverage scene, the importance of specialty stores, and why you should never judge a chef by his cover — or tattoos.

What is one thing people don’t know about you that you wish they did?
I love The Biography Channel (now named FYI) and personal stories in general. I could listen to a war veteran or an entrepreneur go on for hours. I guess it has something to do with history and learning from others' experiences. I really enjoy it.

What daily ritual is non-negotiable for you?
My foam roller. It is the best thing in the whole world following a long day at the market. Every night, I roll my back on it and it’s better than any cocktail for an immediate surge of relaxation. I wouldn't know what to do without it.

If you could have any superpower, what would it be?
Time travel. I think this ties in to my love of history and wanting to see how things were in the past. Can't say I wouldn't take advantage of the lottery or something to bank some dough, but I would definitely go back and see some historical moments. The list would be enormous, but to see the Roman empire or the building of the great pyramids of Giza would be too cool.

What is the most positive thing in food, wine or cocktails that you’ve noticed in St. Louis over the past year?
People are getting adventurous about food at home — like cuts from the offal lists that are not known to most. Most of what I have noticed is millennials asking about things like pork belly, organ meats, etc. It's interesting and fun to discuss their meal plans then get feedback during their next visit. I think we have the cooking shows and the hundreds of recipes and videos on Facebook to thank.

What is something missing in the local food, wine or cocktail scene that you’d like to see?
More specialty stores in north county and more people taking advantage of specialty stores in general. These are the shops where you go for the best quality of what you're looking for. Places where the people that you interact with are professionals, both in providing the greatest customer service and in their knowledge of products they carry. It’s shops like these — like ours — that make the at-home dining scene a pleasure. We want you to ask questions. We want you to try something new and help you to be adventurous about cooking with quality products that will make a difference. Don’t just go to a super shopping center to get everything and end up settling with an average product. The business I'm in is all about the at-home experience, which is definitely growing in popularity and creativity.

Who is your St. Louis food crush?
This might be a little cliché for the group of culinary people I studied with, but Gerard Craft would be it for me. His restaurant, Niche, was my first fine dining experience, and the food was put-you-in-the-back-of-your-chair-mumble-to-yourself good. I had never experienced a meal with that much gastronomy built into it, and the look of the food was pure artwork. I asked the server to meet him and when he came to the table, I literally said, "Get the hell out of here." With little experience in the modern food scene (circa 2010), when I saw tattoo sleeves, a white t-shirt and a stained apron, I second-guessed whether they were playing a trick on me. We chatted for a second after he laughed. It was a great experience.

Who’s the one person to watch right now in the St. Louis dining scene?
Patrick Olds is a friend from the neighborhood and someone I grew up playing football and baseball with. After not seeing one another through our high school years, we met up at Saint Louis University where we were both getting into the food scene. He took the beverage approach and is currently climbing through the ranks as a sommelier. I wish him the best of luck, and hopefully will get to experience his expertise at Louie’s Wine Dive in Clayton the next time I'm out and wanting to challenge my palate.

Which ingredient is most representative of your personality?
I'd like to think of myself as a pork steak. I’m not known to everyone, as I stay to myself most of the time. I'm tough to crack at first, but once you've known me for a little while, I am a pretty straightforward kind of guy. I’m adaptable to any situation and I'm a character all sauced up.

If you weren’t working at the market, what would you be doing?
Teaching. It has always been a passion of mine to teach others. I was a personal trainer for a while and loved it, but didn't stick with it. I get the satisfaction of teaching from being at the market, especially when people ask how to cook the different cuts that we carry. I love hearing the feedback on how it all turned out.

Name an ingredient never allowed in your market.
Vegan cheese! I don't judge others about their food and ethical choices, but I don't view it as cheese and don't plan on selling it. I say, leave it off the menu and quit trying to pretend.

What is your after-work hangout?
Home. My fiancé and two kids are at home and get everything out of me when I'm not working. I can’t get enough of the family life. Even when a twelve- to fourteen-hour day has kicked my butt, I'm still game for driveway hockey or a wrestling match downstairs.

What’s your food or beverage guilty pleasure?
Chocolate milk. On a busy day when it seems like we'll never get ahead on anything and customers keep hitting the counter with no break in sight, we sneak off to the side for a shot. It hits the spot and slows down time for just enough to get your head straight.

What would be your last meal on earth?
The smoked lamb burger that I make myself here at the market. It’s on a toasted ciabatta with olive tapenade, tomato, sweet dill pickles and feta cheese crumbles. Also, since it's my last one on earth, I would have to add a couple fried chicken thighs for sides. I LOVE fried chicken. I would wash it all down with a small glass bottle of Coke. I think the little Coke bottles are classy.