Scott Davis Will Take Over the Kitchen at Cafe Osage 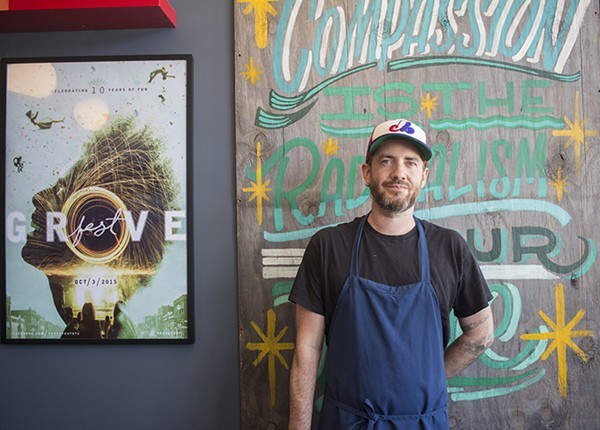 Chef Scott Davis, who's earned acclaim for his work at Three Flags Tavern and Rise Coffee House, among others, is heading to a new kitchen. Cafe Osage (4605 Olive Street, 314-454-6868) announced today that Davis had been hired on as its new head chef.

The cafe, which is located at Bowood Farms on the edge of the Central West End, serves breakfast and lunch — which makes it a perfect fit for Davis. When critic Cheryl Baehr recently raved about Davis' cooking at Rise Coffee House, he mentioned that the daytime hours fit his lifestyle.

As Baehr wrote, "After years spent working grueling chef hours, the breakfast and lunchtime gig at Rise allows him the freedom to explore what his next step may be; it also gives him the chance to spend quality time with his wife and young son while creating the sort of fresh, uncomplicated fare he prefers to eat." Now that next step is clear.

A native of Vancouver, Davis studied at the Natural Gourmet Institute in New York, focusing on vegetable-forward cuisine. He moved to St. Louis in 2012 and worked at Brasserie and Elaia before serving as the opening chef de cuisine at Three Flags Tavern. That restaurant earned acclaim before seeing its business suffer (and ultimately close) thanks to the Kingshighway Bridge project; Davis departed in February 2016. The chef then landed at Rise, earning raves for his big expansion of its menu, which now includes breakfast and lunch offerings, not just pastries. (He also managed to repeat his title as the RFT's Iron Fork winner along the way.)

"Scott’s desire to engage in and help further develop our garden to table concept excites us," the owners of Cafe Osage, the McPheeters family, said in a press release. "Scott will be a major part of planning not only a seasonal menu, but the garden as well. With his attention to detail and penchant for fresh, locally sourced ingredients, we are sure that he will be the right fit culturally for Cafe Osage and the right person to lead our kitchen.

"I’m just looking forward to working with the growers at Bowood and showing off what we can grow in the city,” says Davis, who adds that his goal is to align the beauty of the space and the produce grown on site with a thoughtful, elevated menu. Though he plans on rolling out a menu of his own creation sometime in mid-July, Davis does not plan on rushing anything.

“Right now, I’m here watching how everything works,” he explains. “I want everyone to feel comfortable with what we are doing and not change things too quickly. So far, everyone seems receptive and really excited.”

Davis was recruited by Café Osage, which had gone through a period without a chef after David Kirkland, who had been with Cafe Osage since its opening, left to open a restaurant of his own, Turn, in Grand Center.

As for Rise, Davis will remain on as a chef consultant to help with menu development and special events. He has turned the day-to-day operations of the café over to his longtime colleague, Nate Emmons, who has been working with him at Rise for the last several months.

Davis, who has shown his prowess equally in both fine and casual dining, describes his vision for Café Osage as something that hits somewhere in between. “We’d like to see people more than once a year,” he says. “Rise is the kind of place you can go to several times a week. We’d like to be somewhere between those.”

Editor's note: This story was updated after publication to include comments from Scott Davis. Also, food critic Cheryl Baehr contributed to the reporting of this story.