Sister Cities Is Now Open — Finally! — in Its New Home 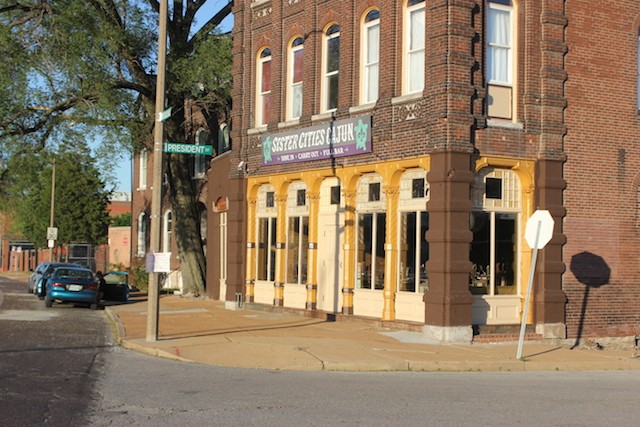 Almost exactly a year after closing its doors on South Grand, Sister Cities Cajun & BBQ (3550 S. Broadway, 314-405-0447) is finally open in its new home — with a week of soft openings begun late last week culminating in a grand opening this Saturday, June 10.

It took quite a bit longer than anticipated to get to this point, acknowledges Pamela Melton, who owns the restaurant with Travis Parfait.

"We have missed every deadline," laughs Melton. "I'd stopped giving people an opening date or even an opening month." And the couple couldn't be happier. Says Melton, "When they handed me my liquor license, I almost cried."

The spot, which opened in 4144 South Grand in Dutchtown in 2013, hit a run of bad luck beginning last January. First a driver skidded through the snow, smashing into the storefront. Though the city condemned the building, they were able to reopen in a few days — but then got hit by a second car three months later. Tired of making repairs to a building they didn't own in a location that could be problematic, they decided to move.

Other than a brief pop-up in the former home of Melt, on Cherokee Street, they've been away from the kitchen for a year. During that time, Melton says, Parfait has labored over renovations to their new building, which was vacant for almost a decade before they took it over. It's a much bigger footprint that offers not just a full-service seating area as before, but also a counter for those in the neighborhood seeking a quick lunch. They're also working on building a deck out back — with plans to add a "mini dog park" adjacent to it.

"The idea is that you could put your dog in the dog park and watch him from the deck," says Melton. "Here we are pipe-dreaming — we want to launch every idea we've ever had in this spot!"

Located in south city's Marine Villa neighborhood, the space was previously home to an establishment called the Great Gildersleeve, and, more recently, a restaurant and 3 a.m. bar called the Brick. "Everybody has a story about what happened to them at the Brick," says Melton, laughing.

Shortened hours will continue for the next few days as the couple works through the kinks of its new kitchen, its new building and that new counter service. After Saturday, though, they plan to settle into regular hours — Tuesday through Thursday from 11 a.m. to 11 p.m., Friday and Saturday from 11 a.m. to midnight and Sunday from 10 a.m. to 2 p.m. And yes, those hours do indicate yet another new thing for Sister Cities — they're adding brunch.

The menu, though, is mostly as it was — expect a few new menu items, but the beloved Cajun nachos, po'boys, jambalaya and dry-rubbed smoked chicken wings are all making a triumphant return. So, too, is the house favorite "Dirty Chick," a chicken breast smothered in gumbo.

They're thrilled to be serving those classics all over again. Says Melton, "We're finally home."