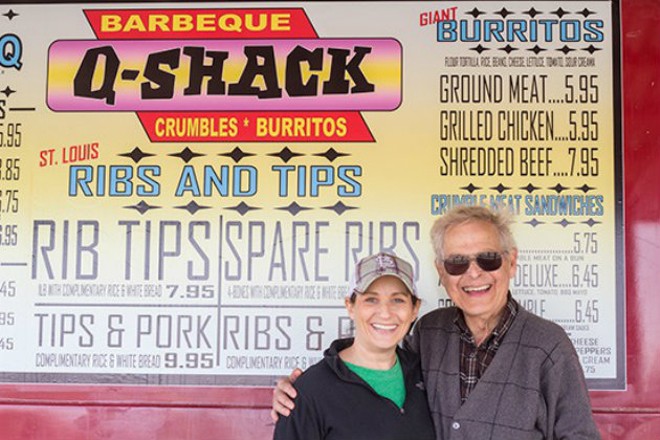 Though he made his fortune in a chain of auto parts stores, Lampert's claim to fame was his signature catchphrase. "What's the story, Larry?" someone would ask in the stores' commercials. He'd reply, "You want it, I got it."

Lampert brought that mindset with him to the restaurant business, an industry he approached with as much a entrepreneurial mindset as a love for food. Talkative and endlessly enthusiastic, he was always in search of the next big thing, beginning in the 1980s with pizza parlors and then a chain of sandwich shops called Fatman's Subs. Recognizing a demand for barbecue in town far before there was a smoker on every corner, Lampert began serving smoked meats at his sub shops, eventually converting them to full-fledged barbecue joints.

Lampert briefly retired from the restaurant business, but he just couldn't stay away from the smoker. In 2005, he opened the popular Plush Pig Barbecue in Clayton to rave reviews. He eventually moved the restaurant to Rock Hill. Here, he pulled his daughter Angie into the business, and the pair would go on to run a sandwich shop in Maryland Heights before converting it, too, into a barbecue restaurant.

Their next venture, the Q Shack, saw Lampert dive into the realm of barbecue-meets-Tex-Mex, where he prided himself in standing as a counter to what he saw was the gourmet-ification of barbecue. Though the restaurant was a success (earning a rave in this paper), his insatiable appetite for reinvention could not be contained by a little shack in a Maplewood strip mall. Before long, Lampert had shuttered the Q Shack and, with Angie, reinvented the concept as a taco, tamale and burrito joint called the Red Shack.

The Dogtown Tex-Mex spot, which opened last June, was run by Angie. But the restaurant would not survive the death of its patriarch, which was first reported by St. Louis Magazine.

"Sadly we lost our leader Larry Lampert on May 8 to cancer," the post reads. "With him gone we are closing the doors to the Red Shack on Friday at 3 p.m."


However, in true Lampert spirit, Angie seemed to leave the door open for another iteration, some new concept some day. In response to a commenter who asked, "Closing forever, or just that day?" Angie replied, "The Red Shack will close for good. Doesn't necessarily mean we won't try something else."

Larry Lampert may be gone, but his spirit clearly lives on. You wanted it, he got it.