Clayton Is the Only Place in the U.S. Selling Grimfrost's Lingonberry Mead 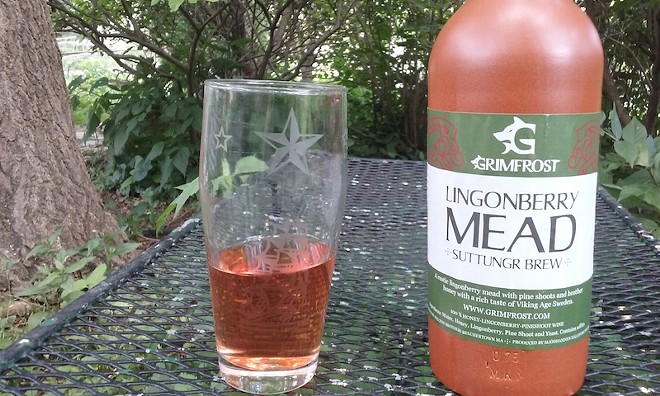 The marriage of Swedish death metal and the Wine and Cheese Place (7435 Forsyth Boulevard, Clayton) has to be one of the strangest unions in recent memory. The Clayton-based bottle shop isn't likely to blast the songs of Amon Amarth on the in-store stereo, but a little bit of band frontman Johan Hegg's work is found on the new arrivals shelf in the form of Grimfrost's Lingonberry Mead.

Grimfrost is a Swedish "viking lifestyle" company founded in part by Hegg in 2014. Last year the company branched out from clothing and jewelry to produce mead, the legendary fermented honey beverage, in partnership with Mjodhamnen, a Swedish brewer of mead. The Wine and Cheese Place is the only outlet in America where you can buy Grimfrost's mead.

Sales have been brisk. An employee estimated that "probably twenty cases have been sold" in the first week it was on the shelves. Many of those sales were no doubt made online, and the shop anticipates bringing in the other varieties (Grimfrost's Jarl's Mead and Bear's Mead, which is made with blueberries) in the next few weeks.

It's going to be hard to top the Lingonberry Mead, though. Made with honey, lingonberries and pine shoots, it's described as a "rustic" mead. Despite being made primarily of honey, it's not as sweet as you might think. The pine shoots give it a bracing sting on the tongue, followed by the tartness of the lingonberries. It finishes with a dry sweetness and slowly building warmth thanks to the honey. It can be served at room temperature or chilled; we stored it for several days in the cellar and it was perfect match for a warm summer day — crisp and refreshing.

And yes, it complements the music of Amon Amarth very well — Twilight of the Thunder God, an essentially perfect album, sounded even better than usual.