Behold Sugarfire's St. Lunatic Burger, the Most St. Louis Food of All Time 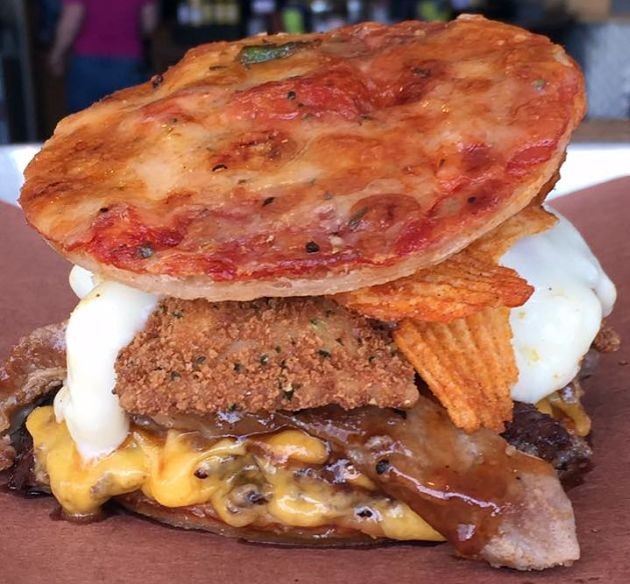 A single cheeseburger, smothered in BBQ pork steak. Red Hot Riplets and provel cheese, just to dress it up a little. Some toasted raviolis tossed in for good measure. Two slices of Imo's pizza for the buns.

Good god in heaven, the St. Lunatic burger is the most St. Louis food ever created. It's enough to bring a tear to the eye.

The latest creation from the Sugarfire team — specifically its St. Charles location — this monstrosity of edible civic pride landed with a massive thud yesterday when the restaurant shared a photo on its Facebook page. "We can assure you that this is the most St. Louis thing to ever happen in St Charles," read the text accompanying the photo, "and quite possible the most historic thing since Louis [sic] and Clark."

At the time of this writing, that Facebook status has been shared more than 1,500 times. And that frenzy carried over into the real world as well.

"Yeah everybody went nuts over it, there's no doubt," chef/manager Eric Erhard says over the phone during Wednesday's lunch rush. "We sold out yesterday — and we did a lot. It was very well-received. It was a lot of fun."

The St. Lunatic is the creation of Adam Pritchett, chef at the Hi-Pointe Drive-In, which is also owned by Sugarfire owner Mike Johnson. Pritchett was at the St. Charles eatery pitching in when he came up with the idea; Erhard says was inspired by "everything St. Louis." It was conceived as a special, one for which they prepped enough for 50 servings. Erhard says that, due to its runaway popularity both online and IRL, it will surely appear again in the future.

"Being that it was the success that it was, sure, we'll do it periodically," he says. "We're always open with our specials and special sides — we redo specials at customer request actually. We'll have somebody that's like 'Oh I really love that special you did — can you make it again?'

"And so we'll do that for people," he continues. "We'll just say, 'Yeah, just give us a couple of days and we'll make it again.'"

You heard the man — if you want the St. Lunatic, all you gotta do is ask. And why wouldn't you? It's all of St. Louis' signature cuisines, all in one package. Slather some gooey butter cake on there and you'll have no need to eat anything else ever again.

What a time to be alive.

Correction: An earlier version of this story identified Adam Pritchett as an employee of the Sugarfire location in St. Charles; he is actually the chef at Hi-Pointe Drive-In, under the same owner. We regret the error.