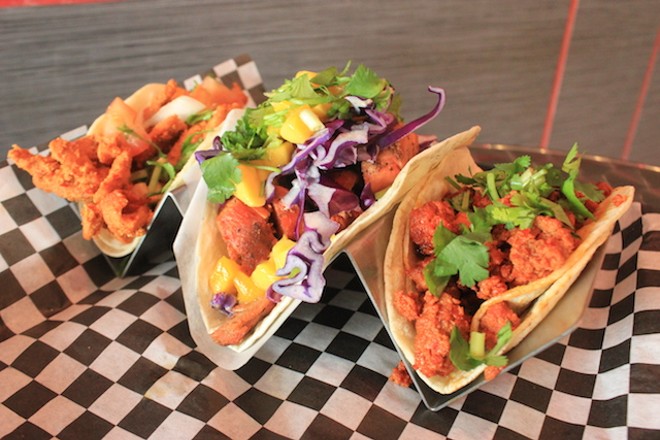 The first thing you're likely to notice about Taco & Ice Cream Joint (2738 Cherokee Street, 314-224-5799) is how very long the ice cream counter is. Set perpendicular to the counter where you order the other treat on offer at this new Cherokee Street eatery — tacos, duh! — it runs nearly the entire length of a particularly deep storefront. Clearly, the owners are preparing for volume.

Those owners, the Rico family, opened the spot last Wednesday, roughly fifteen years after founding El Morelia Supermercado in Bridgeton. Salvador Rico, who is the son of El Morelia's founder, says they began offering tacos at the grocery on the weekends, and customers clamored for more. That got them thinking about a totally new spot — in a totally different part of the metro area.

"We like the vibe of Cherokee Street, and the culture," he says. "We like being more downtown, too."

In finding a home for its new concept, the family didn't take the easy way out — locating in a small storefront or a turnkey restaurant. Instead, they found a sizable spot that had been vacant for several decades, Rico says. Back in the day, it was apparently a department store.

The family's renovations, though, make it as bright and welcoming as any spot on Cherokee. Exposed brick runs behind the ice cream counter, with industrial-style ductwork overhead. Brightly painted chairs sit at traditional four-tops as well as at taller tables, making for an instant party atmosphere.

The tacos run the gamut of proteins, and all but a handful of specials (the tilapia and shrimp among them) come undressed: just a pile of meat on a pair of corn tortillas. That's intentional, Rico says — a well-stocked bar of toppings lets customers pick exactly what they want, from a spicy avocado sauce to pickled vegetables or chopped onions. "Not a lot of people like cilantro," Rico notes. "We'd rather have people make their own choices. You can be creative." Other offerings include tortas, burritos, quesadillas and "Cherokee Nachos," which are laden with steak, pico de gallo, a special sauce and even two over-easy eggs. 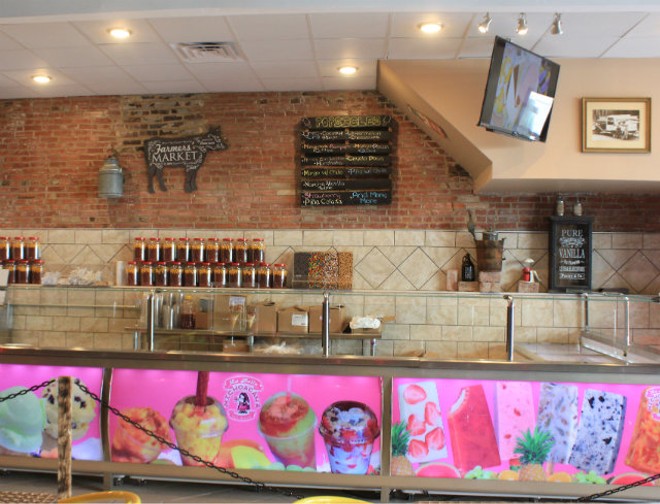 As for the ice cream itself, the scoops on offer aren't the luxe-sounding combinations you might have grown used to at Jeni's or Clementine's Creamery. On our recent visit, they didn't have the avocado flavor listed on the board (a clerk said it would be a few weeks). She suggested we try the Twinkie — a super-sweet buttercream ice cream studded with big pieces sponge cake. Tempting, but no: We instead ordered the "Abuelita," which proved to be a creamy facsimile of the cinnamon-spiked hot chocolate beloved in Mexico. It was positively delicious.

Taco & Ice Cream Joint's owners are making the ice cream themselves, Rico says, and they're not afraid to get creative, with either flavors or toppings. In addition to candy and fresh fruit, you can get your scoop with Takis on top — basically the Mexican equivalent of a Cheeto. See what they mean about getting creative?

Right now the place is open from 11 a.m. to 10 p.m. Monday through Saturday and on Sundays from 11 a.m. to 7 p.m. Rico says they'd like to expand those hours once they get their liquor license — and oh yes, they are getting a liquor license. You thought tacos and ice cream was all the fun you could handle? Hold onto your hats and wigs, boys, because this place just might have everything.

Scroll down for more photos of Taco & Ice Cream Joint.