How Sam Witherspoon Made the Journey from Texas to Sardella 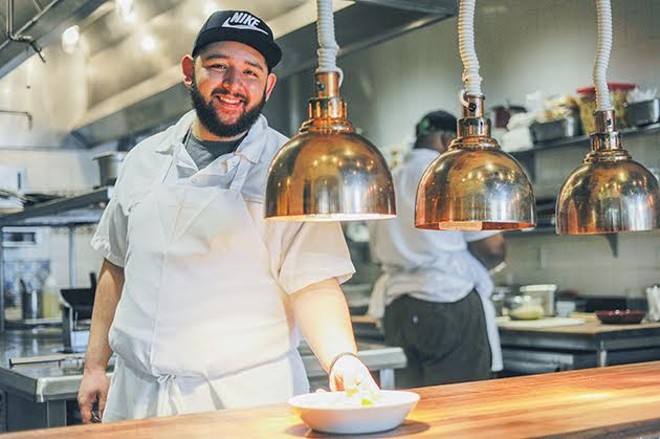 Sam Witherspoon, the executive sous chef at acclaimed newcomer Sardella (7734 Forsyth Boulevard, Clayton; 314-773-7755), laughs when he discusses his original, ill-fated career plan. "I was studying criminology but failed out of college," Witherspoon says sheepishly. "I wanted to be a D.E.A. agent, but, well, I guess I didn't realize that there are some things you shouldn't have done if you wanted to go into that career field."

Witherspoon can laugh about it now, but at the time he struggled to figure out what he wanted to do with his life. He knew he loved cooking — how couldn't he? Growing up in Texas, holidays and even ordinary weekends consisted of backyard barbecues where his uncles would smoke briskets and sausages and his grandmother would do the rest. "We were really into food," recalls Witherspoon. "It wasn't in the sense that we were sourcing seasonal ingredients or anything, but we just made it happen."

That "make it happen" attitude is how Witherspoon approached his first job in the kitchen. Though completely inexperienced, he got a job under an executive chef at an exclusive country club in Houston that counted George H.W. Bush as a member. "I didn't have any knives, and I didn't know how to cut an onion," Witherspoon recalls. "I was a blank slate, but I always asked what the right way to do something was and that's how I fell into the ranks really quickly. I was a guy with zero experience working a station on my second day."

From Houston, Witherspoon enrolled in the Culinary Institute of America in New York and worked for a few acclaimed spots — Danny Meyer's Maialino, Cochon in New Orleans — before landing in St. Louis. His girlfriend was moving to town, and he decided to come with her, not knowing what to expect of the food scene.

He was instantly impressed. "My first meal was at Farmhaus and I was blown away," Witherspoon says. "Kevin Willmann is amazing and let me stage there, and then I got the call from Gerard [Craft]. Kevin told me that if I had the chance to work for him that I needed to take it."

Though he is now steeped in the St. Louis food culture, there is one thing that continues to surprise him: The restaurant community's willingness to work together. "It's such a tight-knit community here. New Orleans wasn't like that; it's cutthroat down there," says Witherspoon. "Here, everyone is willing to help or lend a hand with whatever anyone needs."

Witherspoon took a break from the kitchen to share his thoughts on the St. Louis restaurant scene, his love-hate relationship with coffee and why you'll never see a strawberry in his kitchen in January.

What is one thing people don’t know about you that you wish they did?
I hate coffee, but I drink it for effect.

What daily ritual is non-negotiable for you?
Though it sounds counter-intuitive based off the first answer, drinking my first cup of coffee when I walk in the door.

If you could have any superpower, what would it be?
The power to stop time.

What is the most positive thing in food, wine or cocktails that you’ve noticed in St. Louis over the past year?
I think that St. Louis is embracing the fact that you don’t have to have a fine dining experience to enjoy elevated food. A lot of places are really showcasing the care of their craft with different styles and cuisines of food.

Who is your St. Louis food crush?
I would say Matt Daughaday at Reeds American Table. He’s a cool cat, and every time that I go to Reeds, the food is off the chain. I also think that people should be paying attention to Brian Moxey at Brasserie/Taste. He is putting off some heat at both restaurants with more new dishes on the menu that I’ve seen in the past. It’s just well executed, great food.

Who’s the one person to watch right now in the St. Louis dining scene?
Michael Gallina. I went to Vicia for my birthday two weeks ago, and everything about the experience, from the service to the food, was really great.

Which ingredient is most representative of your personality?
Maybe a chile pepper? I’m pretty fiery. Some people are into it, some people aren’t.

Name an ingredient never allowed in your kitchen.
Out-of-season berries. I hate them.

What is your after work hangout?
Jack Patrick’s downtown, but home most nights these days!

What’s your food or beverage guilty pleasure?
Red Diamond Sweet Tea or What-A-Burger; it’s a Texas classic. Everyone who is from Texas will live and breathe What-A-Burger.

What would be your last meal on earth?
Breakfast prepared by my brother-in-law’s grandmother. She would whip up eggs, bacon, refried beans, homemade tortillas and different salsas — everything you want in a Texas breakfast.