Caffeine Crawl Will Bring Coffee Lovers Together in St. Louis May 12 and 13 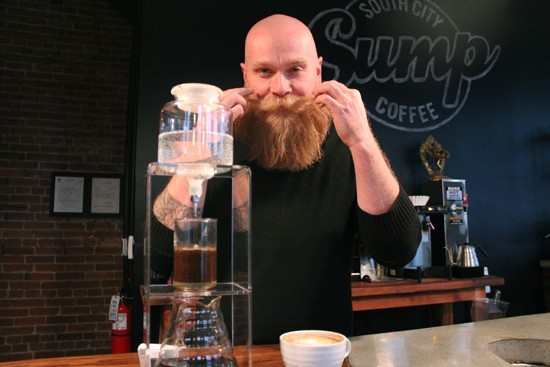 Caffeine Crawl will return to St. Louis May 12 and 13 — the sixth consecutive year the coffee-fueled trip will make its way through top shops here. Coffee enthusiasts can choose between six different routes that snake around the city, with each route stopping at five or six shops.

At each stop, Crawl participants sample specialty drinks and treats while they enjoy presentations and hands-on activities organized by the shop owners and baristas. Although coffee is the drink of the day, many stops also offer tea, kombucha and chocolate. Kids are welcome with a ticket, and some stops have caffeine-free options — and boozy ones for grown-ups.

"Each year the shops seem to step it up, and obviously coffee trends change slightly," event founder Jason Burton explains in an email. "Across the country we're seeing more alcohol-coffee collaborations, and St. Louis is so prime for that with its craft beer scene. Signature coffee drinks are taking on a whole new level of beverage-meets-culinary style, and I could see a shop or two going in that direction."

Caffeine Crawl began in 2012 and is developed by THE LAB, the Kansas City-based specialty beverage marketing firm that Burton founded in 2009. Burton organizes the event alongside Sadie Renee, a barista and fellow member of THE LAB.

Since its inception, the Caffeine Crawl has spread across the country. But this year, only twelve cities are scheduled for events — five less than in 2016.

"Last year really wore on us," Burton writes. "We invested in St. Louis from the very beginning of the concept. I had a relationship with Kaldi's dating back before I started THE LAB...and always had a strong relationship with the place. We've had real healthy working relationships with the key roasters who sponsor, and that has been nice...as far as reducing the number of Crawls for 2017, the travel adds up, both financially and timewise. We really wanted to get back to focusing on our most successful events of the year, and invest more in each of those cities."

The Caffeine Crawl organizers claim that 2017's event will be St. Louis’ largest coffee event to date, and it shows; this year’s event will feature more than twice the number of shops as the first St. Louis Crawl in 2012. Caffeine addicts have gotten the message — one route is already sold out, nearly a month before the event.

"We've had some very dedicated attendees that wait for this event, and they drop us lines throughout the year," Burton writes.

Caffeine Crawl chooses shops based on “friendliness, independence, passion, and excitement,” with an emphasis on local brews — so you won’t find any Unicorn Frappucinos on these tours. Burton cites the collaboration of local coffee shops as one of the Crawl's best features.

"St. Louis really does breakfast foods well, and pairing with good, specialty coffee is a win-win," he writes. "Kaldi's has two routes [where] they are the starting point and hosting a breakfast tied into the Crawl. Stringbean is doing a collaboration roast with the Living Room...and, last year Park Avenue did this amazing 3-course coffee pairing meal, so you know they'll always bring something exciting."

Some tours are taken by car and occasionally by bus, but many are taken by foot; and with this year’s routes averaging eleven miles, you should bring your most comfortable shoes — and your best travel mug.