The milkshakes coming out of the kitchen at Beyond Sweet (5901 Delmar Boulevard, 314-899-5021), the new ice cream shop just east of the Delmar Loop, have to be seen to be believed. They are dipped in chocolate and coated in marshmallow, studded with sprinkles and piled high with whipped cream.

And that doesn't even mention the garnishes, which are seriously otherworldly. The "New Yorker" is topped with an entire slice of cheesecake, the "Cinnabon" with a whole cinnamon roll. Plunked down on top of the "Chocoholic" are not only two doughnuts, but an entire ice cream sandwich. All costing $10 or less, these milkshakes are the ultimate guilty pleasure.

Suffice it to say, owner Dallas Holland has a massive hit on her hands — to the point that, just one month after opening Beyond Sweet for the first time on January 17 in a Delmar strip mall, she had to close. Customer interest had literally overwhelmed the shop's tiny footprint and her staff.


But you can't keep an entrepreneur down. Barely six weeks later, Holland opened in a much bigger space, this time in a sharp new storefront at Hamilton and Delmar. And ever since reopening on April 1, she's been packing them in. 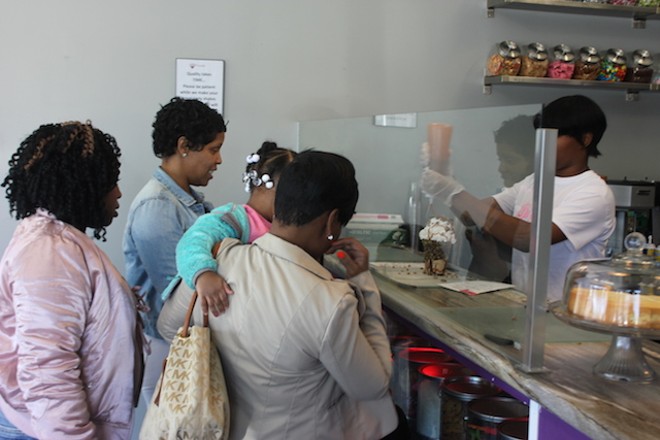 Holland, 40, boasts multiple businesses, all under the "Beyond" rubric — Beyond Care Home Services, Beyond Property Management, Beyond Resources. She got the idea to open a little ice cream shop to fill an opening in the strip mall which houses her home health care agency, and took inspiration from the over-the-top milkshakes she'd tasted in Atlanta.

She credits her sister, Camille McClinton, for helping her run with the idea here. But even she is shocked by how quickly Beyond Sweet has taken off. "I've never seen anything like it," she says.

The big draw, of course, are those shakes. Customers stand at the counter and watch as the staffers assemble them, seemingly designed for Instagram success as much as your sweet tooth.

Holland doesn't even want to hazard a guess as to how many calories are involved — "we'll try to figure it out someday," she says. "Right now we don't want to scare anyone away!" She notes that these are not for every day consumption: "It's supposed to be a special treat." 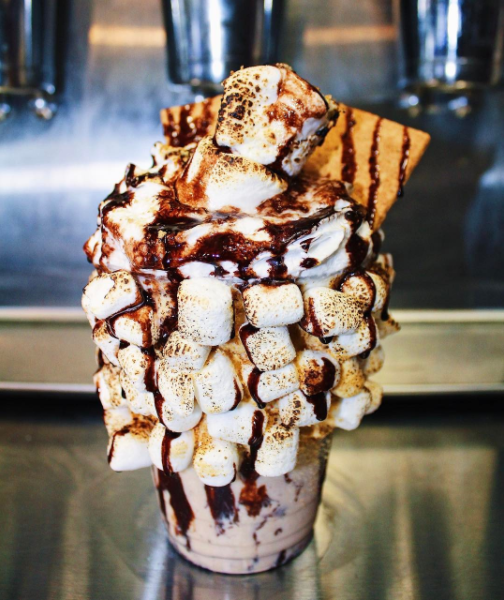 Everything about Beyond Sweet has the feeling of a special occasion. Sure, the WiFi is free, but you wouldn't go here to catch up on work. The music is pulsing and neon lights bestow a fun party feel.

Those with smaller appetites have options. You can order basic ice cream in vanilla, chocolate or strawberry — a scoop is $1.50, with each additional scoop just $1. But dieters beware: Even with those, you have your choice of insane bases: a funnel cake, fried twinkies, fried Oreos. You could get a cup or a cone, but is that really the reason you're here?

In addition to the sweets, a small menu of what Holland calls "fair food" fills out the rest of the menu — wings, hot dogs and pizza. Loaded nachos offer a chance to pig out even if you don't like sugar; Holland hopes to offer ever more creative toppings for them, including shrimp or crab. On the day we visited, the nacho special was a beef brisket.

But again, you're probably not here for meet and corn chips. You're here for shakes — the bigger, and the crazier, the better. Why not give in and go for a New Yorker? Or maybe even try the Chocoholic.