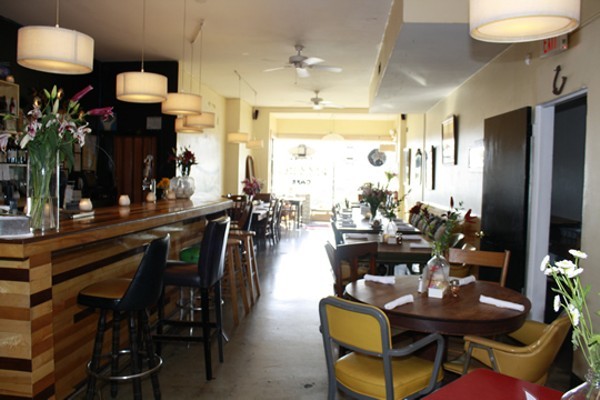 The nine-year-old restaurant was apparently shuttered without fanfare or publicity. The restaurant's phone number continues to ring, but there is no way to leave a message and no greeting that provides contact information for the restaurant's owner, Tom Lee. Visitors at three different times over a three-week period report finding locked doors during normal business hours; a customer reports on the restaurant's Facebook page that he was told by employees at the Rock Hill Katie's that the Clayton location had closed.

Lee did not respond to a message seeking comment yesterday. Reached by phone this morning, Collier says that the closure took place a few months ago, was owing entirely to her father's retirement.

"To be in the restaurant business for nine years — it's a huge feat," she says. "He's really happy. He was ready to move on to the next chapter."

Lee opened the restaurant in 2008 with his daughter Collier, now a rising star in the national food scene. (She was the founder, but he was always the sole owner.) In 2013, she launched a successful Kickstarter to open a new concept on Manchester Road in Rock Hill, Katie's Pizza and Pasta.

Despite the similar names and the similar family heritage, the two businesses do not have ownership in common — and Katie's Pizza and Pasta in Rock Hill not only remains open, but recently announced a Town & Country spinoff.

Tom Lee attempted to sell the Clayton Katie's for $1 million in 2013, but apparently didn't find a buyer.

Editor's note: We updated this post after publication to include additional information from Katie Collier and also to correct an error in our previous version. Katie Lee Collier was a founder of the original Katie's Pizza in Clayton; she never owned a stake in the business.