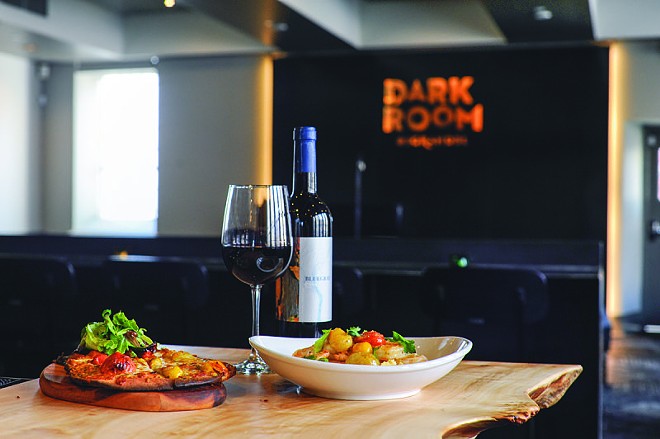 The historic Grandel Theatre has a new tenant — and with it, new wines, dines and exhibitions.

As of this Wednesday, February 22, The Dark Room (3610 Grandel Square) has reopened at its new home after a month-long hiatus, and it’s clear the team at the wine bar and photo gallery has wasted no time in expanding and revamping its business.

The Dark Room was created in 2014 to bring a higher-end wine bar into Grand Center to match the level of theater and arts programming in the district, according to general manager and sommelier Denise Mueller.

“It bloomed into a much bigger beverage program,” she says. “With the addition of the late night music in conjunction with the photography, it became this community staple… Being one of the only places open late-night in Grand Center was a big deal, and with the energy from the photography and the nightly live music being free, we were always in the mindset of a non-profit environment.”

The biggest change for the Dark Room is its recent acquisition by the Kranzberg Arts Foundation, the philanthropic organization that acquired the Grandel in late 2016. The Dark Room’s move and redesign is part of the foundation’s latest efforts to renovate the 133-year-old theater. It pledges that "every dollar spent [at the Dark Room] goes back into the local arts community."

“It’s been the mission of the Dark Room since its beginning to be a community-driven, arts-focused establishment that provides exceptional food, beverages and arts programming to patrons in Grand Center,” writes Chris Hansen, executive director of the Kranzberg Arts Foundation, in a prepared release. “The Dark Room furthers the foundation’s mission to provide opportunity and infrastructure for St. Louis artists, as well as enhances the patron experience and engagement through offering exceptional food, beverages and hospitality, with all the profits from patron purchases going back to benefit the arts in St. Louis.”

The venue will utilize its 1800 square feet to host expanded menus, hours, and events. At its previous location, the Dark Room exclusively served dinner. Now, with the help of executive chef Samantha Pretto, it offers meals throughout the day; from Wednesday to Saturday from 11 a.m. to 4 p.m., they’re serving a ‘Petite Lunch,’ which Mueller describes as “very efficient.”

“People in Grand Center are going to be here if they work in the area, so we want to make sure they can get in and out for a business lunch,” she says. However, for those in town for a leisurely, art-filled day, they’re also adding low-alcohol drinks to their daily menu. “It’s a very European aesthetic — it’s OK to have a glass of wine or a light beer with lunch.”

They’ve also expanded their stage for live music, and with it they’re launching two new music programs: “Dark Room Brunch Sessions,” held from 10 a.m. to 3 p.m on Sundays, will feature live gospel, soul, jazz and Americana. In addition, new acts will play from 5 to 7 p.m. on Fridays.

“You get off work, come have a great happy hour, have some live music,” Mueller says. “It really brings an energy to Grand Center for that TGIF atmosphere.”