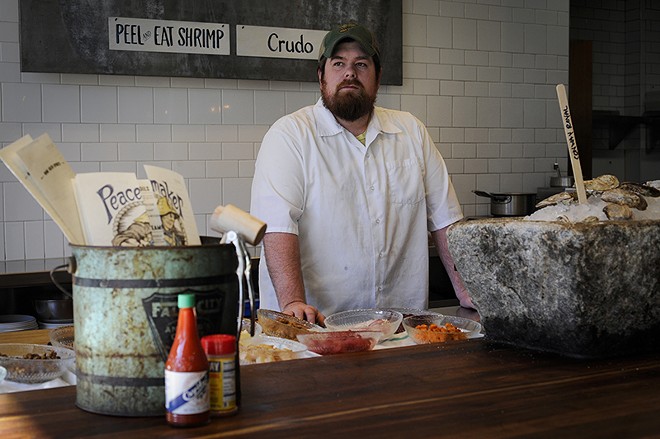 John Messbarger of Peacemaker Lobster & Crab Co. (1831 Sidney Street; 314-772-8858) credits his family's rich food traditions with making him the chef he is today. Whether it was making miniature cherry pies with his grandmother, chowing down on whole Maine lobsters when he was in grade school or attending weekly German-inspired feasts with his dad's side of the family, Messbarger's family made sure he was always surrounded by food.

That didn't prevent his mom and dad from getting upset when he told them he was going to culinary school.

"I went to college for quite a while," Messbarger admits. "I changed my major a bunch of times because I'd be really into something, but when I started thinking about making a career out of it, I just couldn't do it. I finally settled on secondary education, but when I was getting ready to do student teaching, I realized it wasn't for me. My mom and dad were pretty upset. I mean, I'd spent nine years in college and was changing course."

The success he later found in culinary school validated his decision to his family; his ability to keep up with the pace at his first cooking job validated it to him.

"My first real kitchen job was at Truffles," recalls Messbarger. "I was originally hired to be a prep cook, but they needed someone to fill in on the line and said I was it. I didn't think I was ready, but I didn't really have a choice. Thankfully it was early in the week so I had a slow few days to ease into it before the busy weekend. I didn't get yelled at — well, not all that much."

Messbarger found his culinary voice working as the pasta cook at Mike Randolph's former restaurant, the Good Pie. However, when Randolph announced he was going to open Público and change concepts at the Good Pie, converting it to Randolfi's, Messbarger saw it as a chance to change up things.

That change came thanks to Messbarger's parents. One night, they were having dinner at Sidney Street Cafe, and their son's name came up in conversation with chef Kevin Nashan. Nashan asked if he'd have their son give him a call about a new project he was working on. The next thing he knew, Messbarger was getting briefed on what he thought was a crazy idea to bring an East Coast-style lobster shack to the Midwest.

"He told me about his idea for Peacemaker, and all I could think was, 'How is he going to pull this off in the Midwest?'" Messbarger laughs. "I remember thinking he would have to charge $55 for a lobster roll."

Messbarger checked his skepticism and found himself as part of Peacemaker's opening team and eventually the restaurant's chef de cuisine. Though one of his fondest childhood food memories was the Maine lobster his parents let him eat as a child, he admits he wasn't exactly an expert in seafood when he first started. "Chef went to Maine for a while before we opened, so he came back with a clear vision," Messbarger explains. "But not long after we opened, he took a few of us on a trip up to Maine, and it really opened my eyes."

These days, Messbarger is no less a lobster roll connoisseur than a Maine native, although there is one thing they have on him that he's yet to experience. "The McDonald's in Maine serve lobster rolls," he says. "Seriously. I didn't get to have one when I was there, but the next time, I'm going to make it happen."

Messbarger took a break from the kitchen to share his thoughts on the St. Louis food scene, his love of Korean barbecue and how nothing is off limits in his kitchen.

What is one thing people don’t know about you that you wish they did?
I am a huge fan of animals and nature, especially dogs.

What daily ritual is non-negotiable for you?
Playing with my dog, Braddock.

If you could have any superpower, what would it be?
Time travel.

What is the most positive thing in food, wine or cocktails that you’ve noticed in St. Louis over the past year?
More chefs being able to open their own places; it’s really strengthening our food and beverage scene.

What is something missing in the local food, wine or cocktail scene that you’d like to see?
Late-night dining, other than diners.

Who is your St. Louis food crush?
Chris Bork; what he is doing at Vista is amazing. He is able to do a ramen joint that pays homage to its tradition but blend his own style and not cling to the restaurant’s name.

Who’s the one person to watch right now in the St. Louis dining scene?
Jose Venta, a cook down at Sidney Street Cafe, who worked at Peacemaker with me. He really cares about not only food, but the restaurant he is working at. I’m excited to see what the future holds for him.

Which ingredient is most representative of your personality?
MSG.

If you weren’t working in the restaurant business, what would you be doing?
Most likely I would have gone into history or possibly something in biology. Those were my favorite during my long time at school.

Name an ingredient never allowed in your kitchen.
Nothing. Everything can serve a purpose.

What is your after-work hangout?
The Whiskey Ring is definitely my go-to spot. I also really enjoy Ted Kilgore's drinks at Planter's House.

What would be your last meal on earth?
I would start with a Courtesy Diner slinger; then have Korean barbecue with family and friends where the soju flows like water. I'd follow it up with a Gioia’s hot salami and a dessert of 3:30 a.m. Eat Rite burgers.