Chipotle on the Loop to Close at Month's End 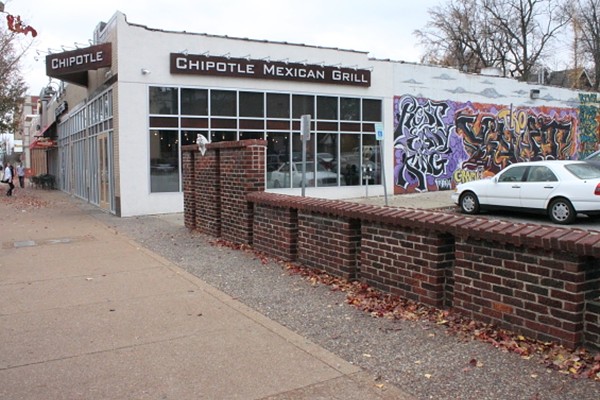 Another restaurant is leaving the Loop.

Nine months after Noodles & Co. shuttered its location on Delmar, its next-door neighbor, Chipotle Mexican Grill (6316 Delmar Boulevard) will be doing the same thing on February 28, a company spokesman confirmed to the RFT.

But burrito lovers aren't out of luck; Chipotle plans to open a new location nearby. "We made the decision to close because the lease is up, but we expect to open a new restaurant in a better location to serve that area," spokesman Chris Arnold said. The new location has yet to be identified, he said.

The Loop has seen something of a wave of exits among national chains in the last year: In addition to Noodles & Co. (whose former home remains vacant), Saint Louis Bread Co. and Smoothie King have both pulled out. Subway has also closed its doors, although it plans to reopen this year in a new location down the street.

Opening in 2007, Chipotle and Noodles & Co. were among a wave of chain stores and restaurants to open on the street, which touched off a period of hang-wringing described in an April 2007 RFT story.

The story cited a number of chain openings, including Cold Stone Creamery, Jimmy John's and Crazy Bowls and Wraps. Today only Jimmy John's is left.

Many non-chain restaurants have closed in the last year as well on the eatery-saturated street, including Zippy Burger, Moya Grill, Seoul Q and 8 Dollar Deli. A new $51 million trolley is expected to begin test runs soon on the street, following a lengthy construction project that some businesses cited as a factor in declining sales.