Firecracker Pizza & Beer to Bring 'Pizza Without Borders' to the Grove

"We were in my business manager's office working on pizza crust ideas, and I was eating an authentic chile relleno that one of the woman who works for us at Atomic Cowboy had made for lunch," recalls Schloss. "I put it on top of the pizza, smashed it with my fork, and it was like that Reese's Peanut Butter commercial when they say 'You got the chocolate in my peanut butter.' I've never seen a chile relleno pizza, but maybe I will now."

A Mexican-influenced pizza is just one of the many things in store for diners when Firecracker Pizza & Beer opens in the Grove this spring. The brainchild of Schloss and Pi Pizzeria co-founder Frank Uible, Firecracker will offer diners internationally inspired pizzas, craft beer and a quick, yet hospitality-minded service concept they are calling "craft casual."

"The idea of fast-casual is that food is highly customizable and there is speed of service," Schloss explains. "But standing in line and watching your pizza go in and then come out of a conveyor belt is not social and it's not the best use of your time. We want to take the customization and speed of fast-casual, but at a table and with knowledgeable service."

Since opening Atomic Cowboy in the Grove more than a decade ago, Schloss has watched the neighborhood grow from a spottily occupied stretch of Manchester into a bona fide nightlife destination. However, he's noticed that daytime-friendly dining options continue to be limited, as many of the restaurants are actually bars that serve food rather than restaurants in themselves. He's hoping that Firecracker fills this niche.

"This neighborhood needed a pizzeria, and none of the successful pizza operators in town were going to come here because they had locations that were already too close," says Schloss. "So we got together and worked out what a pizzeria in the Grove should look like."

Schloss and Uible looked to Grove-like neighborhoods in cities like Portland, Denver and Nashville to see how they had interpreted a modern pizzeria and noticed that people were getting away from the traditional Italian model. Global food offerings with unusual flavor combinations appeared to be popular with millennial diners, the people who Uible says see the Grove as their playground.

"It's pizza without borders," Schloss says.

Schloss and Uible tapped Liz Schuester of Tenacious Eats to lead the kitchen, a decision that was based upon her comfort with a wide range of international cuisine. "Liz personifies the brand," says Uible. "She's lived and cooked all over the world and knows everything from chimichurri to miso to Italian. She understands that the approach we want to take is to elevate pizza, and that every food culture has a vehicle similar to it, whether or not they call it that."

In addition to pizza, Firecracker will feature a robust craft beer program, served by a staff well-versed in the offerings.

"There's a craft beer boom and a fast-casual pizza beer boom, so putting them together is natural," says Schloss. "I think what we are doing that hasn't been done before though is to put them equally in the spotlight at the same place. For years people have said that beer and pizza go so well together, but elevating them like this is unique." 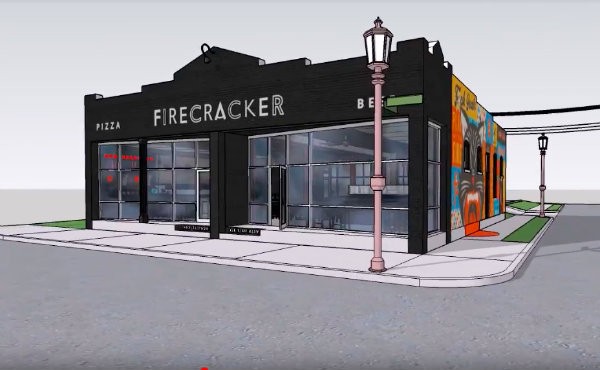