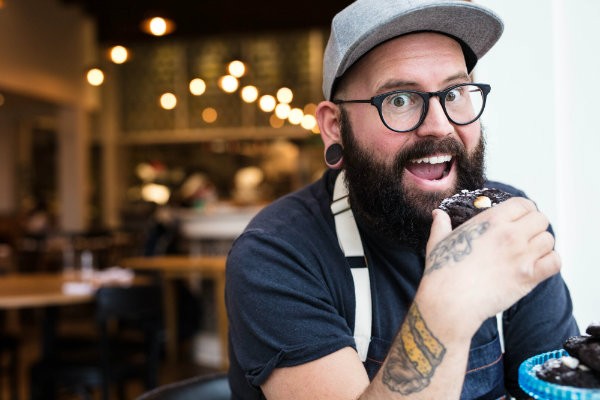 For Mathew Rice, baking was a form of rebellion. "I grew up in Asheville, North Carolina, in a family of excellent bakers, so early on I developed a love of all things sweet," the Niche Food Group executive pastry chef recalls. "Eventually, I would help my mom with the poundcake she'd make for Sunday dinner and was doing a good deal of baking by high school. It was my way to rebel against how things were in the South — the notion that only women can bake. It was my way of saying that anyone can do it."

Rice knew right away that he wanted to go to culinary school post-high school, though he was discouraged by how little his formal training touched on pastry. At his mom's prodding, he took a job as a pastry assistant after culinary school so he could soak up as much knowledge as he could on the job. He also read everything he could get his hands on and traveled to New York so he could stage and gain even more experience.

His efforts paid off in the form of his first executive pastry position in Salt Lake City. Finally, he was at the helm of a pastry kitchen, getting to write his own menus and develop his own concepts, and he was thrilled by the responsibility. However, the job would prove to be much more than a resume builder.

"It's where I met Gerard," Rice says of James Beard award-winning chef Gerard Craft. "When he first started, he was just the guy with all the tattoos on the line." Craft would pass Rice when he grabbed things from the walk-in cooler, and he'd grab a spoonful of sorbet or ice cream to cool down from the hotline. The two struck up a friendship.

When Craft made his way to St. Louis to open the restaurant that would become Niche, he turned to Rice to consult on the pastries.

"The plan was to develop a menu that was simple enough for his salad cook to prepare," Rice explains. "I came out to help him get ready for the opening, and as it got closer — maybe a few days out — I think he was getting nervous and realized he wanted something full-time. He asked me if I'd stay."

Craft's offer came at a time when Rice was looking to be closer to home. His mother had passed away that year, and he was realizing the importance of being closer to family — a day's drive back to North Carolina was much easier than a cross-country flight. Plus, he needed something to lift him during that difficult period. "After my mom passed away I was kind of lost," Rice admits. "I'd suffered so much loss that year that being part of the birth of something new was really important."

Rice still remembers the first dessert he did for Niche. "It was a chocolate cake with a liquid center," recalls Rice. "At that time, Niche didn't have an ice cream maker, so for the frozen element I made a malted chocolate semi-freddo. I think it was on a bed of cookie crumbles and covered with hot fudge sauce. It's definitely dated now, but back in the day, it's what everyone wanted."

Rice worked at Niche for four years, but left for Chicago — a city that had always been on his radar. Again, the distance did not end his friendship with Craft, and when Craft told Rice he was getting ready to expand Pastaria to Nashville and needed a pastry chef, Rice jumped at the opportunity.

"I love Nashville and the South, and it's super close to where I grew up," Rice explains. "It's an opportunity for me to come back and be with my restaurant family, but it's also a market where I get to do my southern-influenced stuff."

With Pastaria Nashville's opening date still not firm, Rice is back in St. Louis, bringing that Southern influence to Craft's current restaurants, most often at Taste and Porano. He took a break from making Porano's famous gelato pops to share his thoughts on the St. Louis food scene, that his sweet tooth secretly isn't that strong and why pizza is always the answer.

What is one thing people don’t know about you that you wish they did?
I'm not the same sugar freak that I was years ago. I still love sweets but I indulge only occasionally.

What daily ritual is non-negotiable for you?
The gym. When I was getting ready to do Chopped, I decided I wanted to be in the best shape possible, so I started working out daily. It's something I've stuck with ever since, and I love my active life.

If you could have any superpower, what would it be?
Hmmm, this is a hard one for me! To stay young forever, I guess? Nothing thrills me more than when people still think I'm twenty-something.

What is the most positive thing in food, wine or cocktails that you’ve noticed in St. Louis over the past year?
The rise of healthier options. I'm a huge fan of cold-pressed juice, so when I'm not doing my own, it's refreshing to see places like I Love Juice, Seedz, and Revel Kitchen doing a great job with theirs. I was in Chicago for six years, so forgive me if some of these places have been around longer. They're new to me!

Who is your St. Louis food crush?
Mike Randolph. He's someone I've gotten to know very well since returning to St Louis. You can find me at Half & Half nearly every weekend for brunch and at Randolfi's whenever I have a craving for pizza.

Who’s the one person to watch right now in the St. Louis dining scene?
Chris Bork. Vista Ramen is one of my favorite spots in the city. Tell me you've had those ribs and not fallen in love. Everything there is spectacular.

Which ingredient is most representative of your personality?
Cardamom. It's unique, but a little goes a long way.

If you weren’t working in the restaurant business, what would you be doing?
Taking pretty pictures of food.

Name an ingredient never allowed in your kitchen.
Pistachio paste. It doesn't taste like pistachio to me. I'd much rather toast and grind my own.

What is your after-work hangout?
Usually the gym. It's a great way to clear my mind after work.

What’s your food or beverage guilty pleasure?
If I'm feeling like cheating, nothing satisfies me like a giant wedge of grocery store bakery vanilla cake with sugary, shortening-filled frosting.

What would be your last meal on earth?
Pizza. The answer is always pizza.