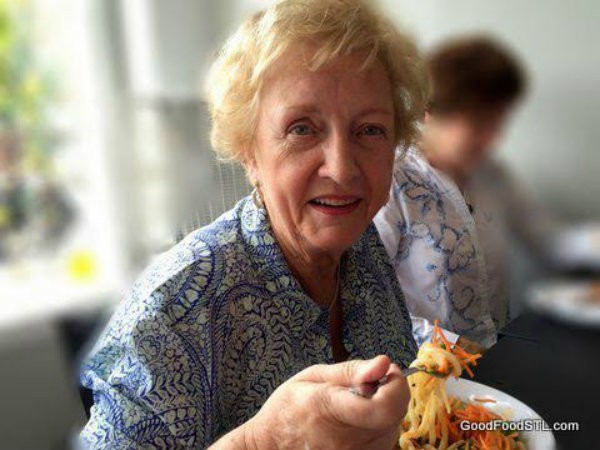 The fact that she got into food writing by getting shooed out of her mother's kitchen isn't lost on Jean Carnahan. "Growing up, we lived in a row house with a tiny kitchen, so there wasn't room for me to be in there," the former U.S. Senator recalls. "But that was fine by me. I wasn't all that interested anyway. My interests were baseball and books."

For many, the name Carnahan is synonymous with Missouri politics, not food. The wife of former Missouri Governor Mel Carnahan, Mrs. Carnahan came into the public eye as Missouri's First Lady — and later held office on her own.

But these days, it's food that keeps her busy. Carnahan's blog covers everything from first looks at local restaurants to recipes. At Good Food STL, she shares her thoughts on old family recipes like her mom's spoon bread ("It's never quite like hers, though," Carnahan admits) and weighs in on the restaurants she visits, whether it's the latest hot spot from top chef Gerard Craft (Sardella) or the "mom and pop" Vietnamese restaurants that are near and dear to her heart.

For Carnahan, the blog is a return to her first love.

"When I was a kid, I used to read Superman comics. I always wanted to be Lois Lane," Carnahan laughs. "I really wanted to be a newspaper reporter. When I was [a teenager], I submitted my first piece of writing to an old rag that used to publish love stories. I didn't even get the courtesy of a rejection."

Carnahan was not easily discouraged. She continued to write — everything from humor to programs for church banquets to personal essays. When she got married and her husband became involved in politics, her writing took a more practical turn as she was tasked with his speeches, press releases and policy documents.

Her turn at elected office came not by choice, but by duty, in October 2000. Just three weeks before the election for a hotly contested Senate seat, her husband (former Governor Carnahan), their son Randy and his campaign advisor Chris Sifford were killed in an airplane crash. It was too late to remove the governor's name from the ballot, so Mrs. Carnahan stepped in as the unofficial Democratic nominee. When her husband won the election posthumously, Jean Carnahan was appointed to fill his seat, becoming Missouri's first woman Senator.

Following her term in the Senate, though, Carnahan was able to devote herself full-time to her passion for writing. She maintained a blog on politics and published numerous books, including an autobiography, humorous essays and even a comedic romance novel.

About three years ago, she decided to translate her love of food into words and began Good Food STL. A mix of recipes, restaurant profiles and observations about food and dining, its biggest inspiration is her mother.

"My mom was a self-taught Southern cook — a great cook," Carnahan explains. "She owned two hair salons, so she would cook on the weekends and my father would then have leftovers to warm up for the week. She'd make things like pot roast or roast chicken or stews. And there were always potatoes — every kind of potato you can think of."

Though it would be fashionable in the contemporary culinary scene, her mother's use of fresh produce was out of step with her times. "My mom used fresh foods when her contemporaries were using mixes and processed foods," Carnahan says. "We always had vegetables — several kinds — with every meal. She had a garden, so she did a lot of canning."

Her mother's recipes are often her go-to dishes — the sort of comfort food she craves on certain occasions. Still, she has another side to her that likes to push the culinary envelope.

"There are times when I have that little spark of adventure and I like to try something new," she says.

When she discusses her favorite St. Louis restaurants, a love for Asian food is evident. "Don't tell anyone, because they will all start going there, but my favorite place is Banh Mi So," says Carnahan. "There's such a purity in their food. You can go there and you don't feel stuffed, but you still feel like you've eaten really well. Plus, they make their own fish sauce, and I always get some to take home with me."

Carnahan also counts Ben Poremba [Elaia, Olio, Parigi, Nixta] as one of her favorite local chefs and has a particular affection for Bernie Lee of Hiro Asian Kitchen. "Have you heard of the Kamayan dinner they put on?" she asks. "It's for about 30 people. You all sit around the table, and they put the food, on banana leaves, directly on the table. You eat with your hands — it sometimes takes people a minute, but by the end of the meal they figure it out."

For a former politician, it's the appeal of this sort of breaking of bread that inspired her to write about food in the first place. "I used to write about politics, but with food, people can come together a lot better." 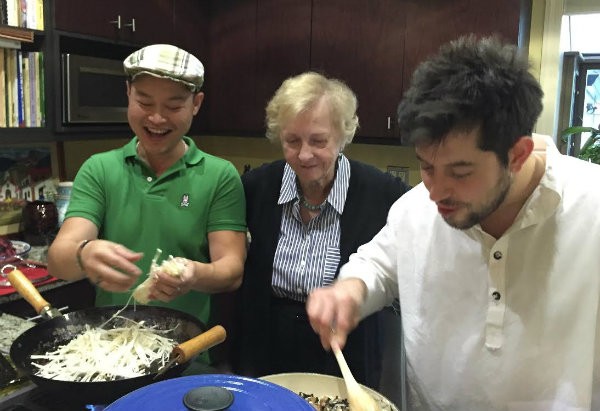