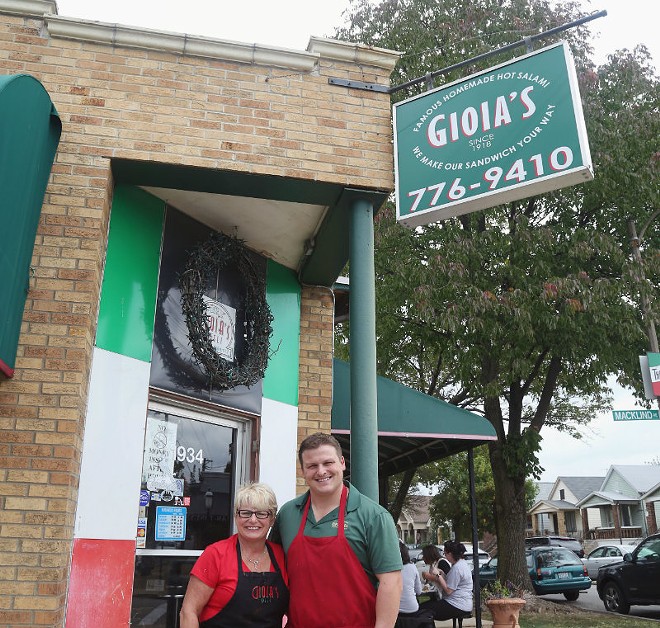 For decades, savvy diners in St. Louis have known that the best hot salami sandwiches in the city are at Gioia's Deli, the 99-year-old grocery-turned-lunch spot in the Hill.

Now the whole world will know about it, too — the James Beard Foundation just awarded Gioia's the highest honor it gives to historic restaurants, naming it "an American Classic."

The award honors "restaurants that have timeless appeal and are cherished for quality food that reflects the character of their community."

Even so, Alex Donley, who co-owns the restaurant with his mother Cathy, says he was shocked to get a call from the James Beard folk. Initially, he let their call go to voice mail, thinking, "Why would someone from New York be calling me?"

Even when they explained Gioia's selection, he could barely believe it. "You guys know we're a sandwich shop, right?" he asked.

He tells the RFT, "When you think James Beard, you think Gerard Craft, Kevin Nashan —  you don't think Gioia's Deli."

That's all about to change now.  According to the Foundation,


For a century, Gioia's has been a fixture of the Hill, the neighborhood that is the heart of St. Louis' Italian-American community. First it served the community as a grocery store, run by Marcallo, Italy, native Challie Gioia. Since Cathy Donley bought it in 1980, the building, built from brick and wood from the 1904 World's Fair, has functioned as a lunch restaurant. Through it all, the recipe for Gioia's signature hot salami hasn't changed. The salami is hot as in temperature, not as in spice. That said, the (mostly) secret blend of pork-head meat, beef and seasonings packs a peppery bite. It's a fresh, boiled sausage, with a texture like coarse pâté and a flavor that is porky, earthy, a little funky. Topped with the city's beloved cheese, Provel, it's a dish that has traveled from Italian to Italian-American to thoroughly St. Louisan.


To date, fewer than 100 restaurants have been given the honor since the category was introduced in 1998.

Gioia's will be feted at the James Beard Foundation Awards Gala in Chicago this May, along with Bertha's Kitchen in Charleston, South Carolina; La Taqueria in San Francisco; Sahadi's in Brooklyn, New York; and Schultz's Crab House in Essex, Maryland.

"In an ever-changing culinary landscape, these honorees have created enduring restaurants and food establishments that have not only stood the test of time, but continue to bring people together in celebration of the unique flavors in America’s vast food scene,” says Susan Ungaro, president of the James Beard Foundation, in a press release. “James Beard would have admired how each of these honorees authentically reflects the character and hospitality of their communities."

The deli, based at 1934 Macklind, also has a one-year-old outpost downtown.