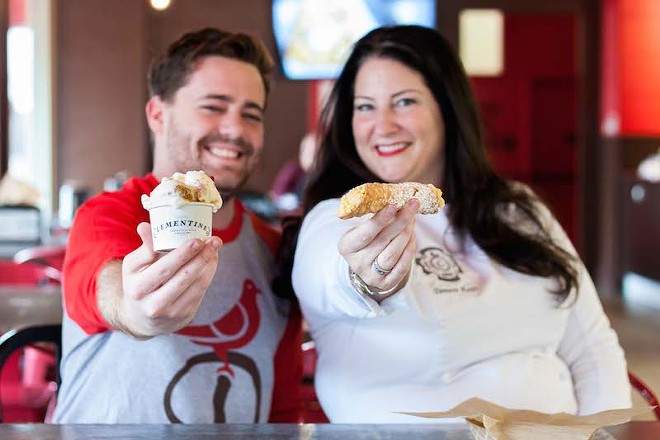 If you live near the Loop and you’re feeling a little naughty — or even a little nice —here’s some good news: Beginning last Saturday, Piccione Pastry (6197 Delmar Boulevard, 314-932-1355) is offering gelato from Clementine’s Creamery.

That means U. City residents will no longer have to make a trip to Lafayette Square for a scoop (or three) of the microcreamery’s treats; now, at the family-owned Italian pastry shop at Skinker and Delmar, customers can experience the best of both worlds. The shop now offers Clementine’s gelato and sorbet in addition to its existing menu of delicious cannoli and other desserts. It's a rare chance to get a cone or cup from Clementine's outside of its flagship shop, which to date is its only standalone location.

“We’re delighted to partner with Piccione to add our hand-crafted gelato to their already amazing menu,” says Tamara Keefe, owner of Clementine’s. “It felt like a natural fit. We both have a commitment to fresh, natural ingredients. And everything’s hand-crafted.”

Nix initially approached Keefe about the collaboration. Thanks to their mutual enthusiasm, it didn’t take long for the pieces to fall into place.

“It only took about a month,” Keefe says. “It’s just a really good fit.”

The two companies are relatively young, but their products have already become St. Louis staples.

Piccione, which opened in mid-2013, features a lunch menu in addition to its pastries, and tarda colazione, or late breakfast, on weekends.

Clementine’s opened its Lafayette Square location in May 2015, and is known for its “nice” creations, like gooey butter cake ice cream, as well as its “naughty” alcohol-spiked flavors, such as maple bourbon and milk stout. In late spring, Clementine’s plans to open a second location on Macklind Avenue in the Southampton neighborhood.

“We have some innovative flavor ideas in store, and can’t wait to share them with visitors to the Loop!” Keefe says.

One notable collaborative treat sure to make customers happy: the "gennoli," a crispy cannoli shell stuffed with Clementine’s gelato. On Saturday, they sold out in less than two hours.

Editor's note: Due to an editing error, the original version of this story contained inaccurate information about the products on offer at Piccione. They include gelato and sorbet, but not ice cream. We regret the error.