Blues City Deli Named One of the Best Eateries in America 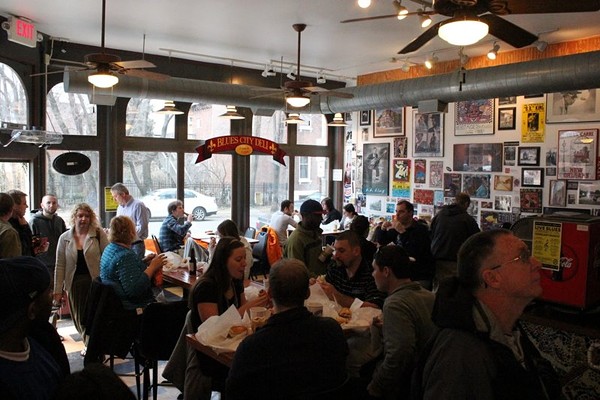 The annual list, an aggregate of recent reviews and business performance, ranked Blues City Deli first in Missouri — and No. 28 in the whole country.

Blues City Deli, which will celebrate its thirteenth birthday this year, is home to some of the most beloved sandwiches from along the Blues Highway—including New Orleans’ mouth-watering muffuletta, and the Memphis Stax, packed with pulled pork and spicy slaw. Since the deli’s debut in 2004, the menu has expanded from a dozen to more than 50 sandwiches, salads, sides and brews.

Although the Benton Park eatery has admirers from across the country, it’s the loyal St. Louis patrons who are its most die-hard fans. The line often stretches out the door and around the corner. When people from other cities arrive with empty bellies, Valenza is thankful for the opportunity to show off the city's friendly and hospitable spirit.

“We work hard at what we do, but we enjoy the daily challenge. We like to be creative — keeping it fresh throughout the year, while remaining constant on a few key factors,” he says. “I’m so grateful to all of our customers, and especially our staff.”

Since 2015, the Blues City family has also operated Melo’s Pizzeria, which operates from a converted garage adjacent to the deli. The pizzeria, which has received similar acclaim, shares a patio with the deli, which Valenza hopes to expand and enclose for use in the winter months.

Valenza and his team is hopeful that the recognition will bring new faces to the deli counter, and they look forward to more good surprises in the future.

“We can’t sit on our laurels, though. We have to keep at it,” Valenza says.

See, we've got something to look forward to in 2017: More excellent sandwiches.