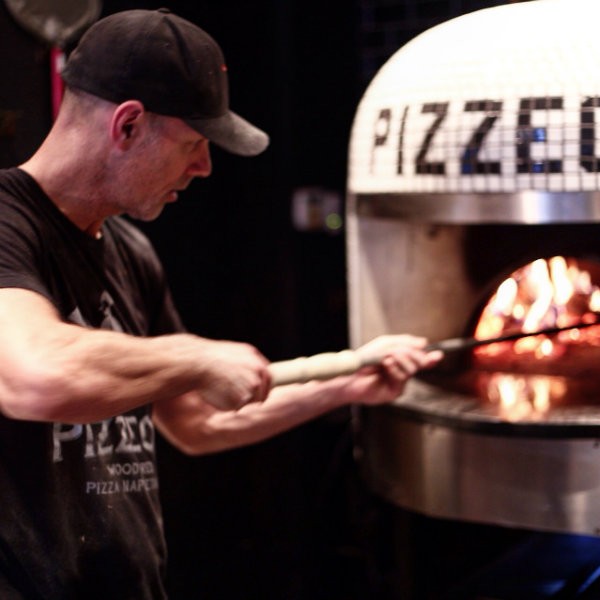 What St. Louis pizzeria is known for canned beer, large pies and slices and punk rock music? As of now, the answer is none of them — but that's going to change this spring, when Scott Sandler opens his new counter-service, New York-style pizza concept, Pizza Head, on South Grand.

Sandler, who also owns Soulard's renowned Neopolitan-style Pizzeoli (1928 S. 12th St.), says he's had the idea for Pizza Head for a while. The New Jersey native started thinking about opening a laidback, New York-style pizza joint about a year ago, when he visited a retro-style pizzeria back East that had details like '70s-style booths, paneling and chandeliers. He knew there was only one place in St. Louis where he could make such a concept work: South Grand.

Fast forward to now, and he's making arrangements to do just that — and rather quickly, too. Things fell into place "serendipitously" when he was eating at Tree House recently, and the owner told him the nearby spot that previously held Brickyard Tavern, at 3196 South Grand, was available. He called the broker the next day, said "I'll take it," and signed the lease last Monday. He aims to open Pizza Head by April, if not sooner.

"If I could pick any place in the city where I wanted to be open, that was it. It was, like I said, serendipitous that that place came open. It was just crazy," Sandler says. "So I was like, 'I don’t think I can pass up this opportunity, I don’t think I’ll be able to get in this location again if I pass this up.'”

Sandler, who has been a vegetarian for twenty years, plans to make Pizza Head meat-free, just like Pizzeoli. Unlike Pizzeoli, however, Pizza Head will offer pizza by the slice in addition to large, 20-inch pies. As originally reported by Sauce, Sandler plans to serve cheese pizza, white pizza, about eight classic toppings and the option of vegan cashew cheese. Pizzas will be made on high-heat electric pizza decks, allowing for speed.

Sandler expects to do a lot of takeout orders, as well as delivery through partnerships with third-party services like Postmates and SkipTheDishes. However, he says, "There is definitely going to be an eat-in experience component." He anticipates having twenty to thirty seats, including the bar, as well as an old-school, music-oriented vibe — with photos of bands, concert posters and punk rock music.

For all its dining diversity, South Grand hasn't had a full-fledged pizzeria among its large assortment of international restaurants. Sandler believes the location will attract people who wouldn't come to Pizzeoli because it's too far, too expensive or lacks meaty options.

“Having that slice element, that is going to draw in a lot of crowd that wouldn’t come to Pizzeoli because we don’t have meat, whereas everyone will like a nice, big New York cheese slice of pizza," Sandler says.

Sandler expects to be open Tuesday through Sunday, opening from around 11:30 or noon to 10 or 10:30 p.m. on weekdays and staying open 'til midnight on Friday and Saturday (yay, late-night pizza!). Since Sandler isn't making any architectural changes, he's looking to open as soon as possible.

He's already got big plans for Pizza Head, which takes its name from the idea of someone who's really into something (think gear head, or Dead head, or bread head).

“I wanted to have a branded type of of place. More branded than here at Pizzeoli," he explains. "Something that, in the future, I could possibly duplicate somewhere. Like I would never do two Pizzeolis, but I would do maybe another Pizza Head in Columbia, Missouri, or I’d do it in Chicago, or I’d do it somewhere, if it’s successful."