The Best Spots for Gooey Butter Cake in St. Louis 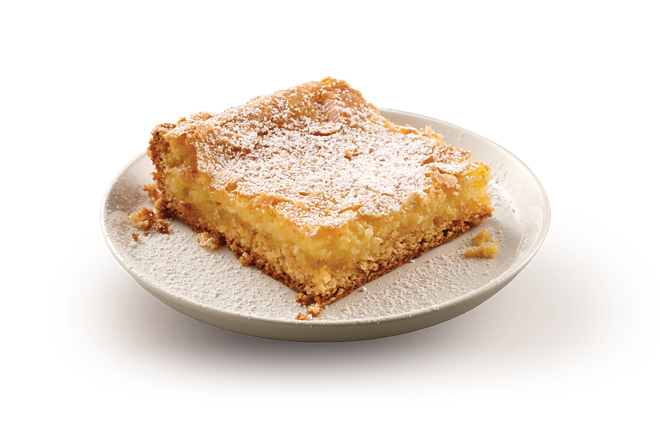 Fans of gooey butter cake know that the delicious concoction originated right here in St. Louis. South St. Louis, to be exact, when the area was flush with German immigrants. It was first made in the 1930s as a mistake by a new baker at a German bakery who mixed up batter proportions for coffee cake, and it became an instant hit.

Locally, that is. The Gateway City's favorite dessert never quite caught on outside of St. Louis, and that’s fine by us. It’s just another one of our quirky square-shaped local delicacies, and we're happy to recognize its greatness even if the rest of the world doesn't get it.

The traditional recipe simply calls for cake flour, butter, sugar, eggs and a dusting of powdered sugar, though some bakeries have taken some fun liberties with it. Pick some up and introduce a newcomer to this St. Louis specialty, or just remind yourself why we fell in love with it in the first place.

Little O's Old Time Soda Fountain
125 North Main Street, St Charles
The Ozenkoski family is said to have been taught its technique by one of the original gooey butter cake bakers. The recipe has since been passed down over the years with only minor tweaks. The old-timey shop offers an original gooey butter cake, as well as flavors such as peanut butter chocolate chip, strawberry cheesecake, brownie and even a gooey butter milkshake.

Missouri Baking Company
2027 Edwards Street, The Hill
Missouri Baking Company operates on the assumption that butter and sugar are the best combination — making gooey butter cake a "must" on the menu. The recipe is a bit different from the traditional, however. Theirs is an actual cake made with almond paste and a sweet dough, which is more solid and less gooey. The flavors change with the season — right now, cherry, chocolate chip and eggnog are featured. Valentine’s Day brings red velvet, summer offers triple berry with strawberries, blackberries and blueberries, and fall’s featured flavor is brown sugar pecan.

Hartford Coffee Company
3974 Hartford Street, Tower Grove South
Gooey butter cake is a relatively new offering at Hartford Coffee Company. After adding the dessert their grandmothers often made, the owners saw it quickly become a surprise favorite at the shop and added it to the daily menu. Regularly offered flavors include original, blueberry and chocolate chip; new flavors appear seasonally and by request.

The Mud House
2101 Cherokee Street, Cherokee District
The gooey butter cake recipe used at the Mud House has mysterious origins: It came from a former employee's mother from Nebraska. It stands out from the pack in that it uses a short dough that rests overnight, which is then pressed into a pan and topped with cream cheese, powdered sugar, eggs, vanilla and lemon juice, which balances the sweetness of the filling. It's baked for a long time to caramelize the sugars in the crust and on the top, but the gooey remains gooey. Every once in a while, blueberry lime or strawberry lemon flavors are featured.

Yolklore
8958 Watson Road, Crestwood
The new fast-casual breakfast-and-lunch spot in Crestwood, Yolklore, offers a variation of gooey butter cake with three balanced layers of cake, “goo” and crispiness. The bottom layer is more of a crust than a cake and the “goo” develops a crispy layer on top after its baked. “It’s not for the faint of heart,” says chef-owner Mary Bogacki.

Boundary
7036 Clayton Avenue, Hi-Pointe
The beautifully plated gooey butter cake at Boundary, which chef Rex Hale reworked from his mother's recipe, is offered on special at the restaurant in the Cheshire Hotel. Flavors have included original, chocolate, pumpkin and lemon.