The U.R.B. Lets You Taste-Test Beer — and Eat Pizza — in the Grove

Urban Chestnut really cares what its customers think—enough to make them part of its decision-making process. Two weeks ago, the homegrown St. Louis company opened its Urban Research Brewery (4501 Manchester Ave), nicknamed the U.R.B., a pilot brewery in the Grove where customers can sample and rate potential new beers.

“It’s supposed to be a fun experience for [customers] to try new things, but we do hope to get some data points,” explained co-founder/brewmaster Florian Kuplent. “If we want to release a new beer that’s summer seasonal, we would brew different versions of the one recipe or several recipes that would fit into that category, and then put that on the panel here, have people try the beers and then evaluate that and get some feedback from customers that drink our beers.”

Wednesday through Saturday from 5-8 p.m. customers can pay $1 to try multiple 2-ounce samples of test batch beers. Then, using their smartphones and Urban Chestnut’s digital survey system, customers can rate and rank the beers they sampled.

It's not just suds, though: The on-site pizza parlor is open daily from noon to 8 p.m. And during those hours, patrons can also order standard Urban Chestnut brews without the rating component.

The 2,500-square-foot space is separated into three rooms—the first housing the pizza counter with picnic table seating, the second holding additional seating along with the brewing equipment, and a third room with a tasting bar.

The pizza aspect was an afterthought to the consumer-driven beer testing, Kuplent says. “It really has nothing to the research part, it’s just to provide a food option in here for people who want to sit down and have a few beers." He adds, “The goal is to combine the hours, but we’re still in the testing phase."

Urban Chestnut first opened in Midtown in 2011, later adding a brewery and bierhall in the Grove — and a brewing facility in Kuplent's native Bavaria. Both of its St. Louis locations serve a full menu of food.

At the U.R.B. (pronounced "urb"), the food offerings are minimalist, with the only option being pizza. A half-dozen options are offered on any given day. Slices range from $3 for a cheese version to $5.99 for two toppings; you can get a whole pie for $16.99, $20.99 or $24.99, depending on whether you want a cheese pie or one or two toppings.

Although initially an afterthought, the pizza is already attracting fans with its unique combinations like butternut squash and sunchokes. And the concept as a whole also drew raves during our recent visit.

“Millennials like to rate everything and write reviews,” notes patron Joan Frost. “They like to drink beer, they like to eat pizza—it pulls it all together. I don’t know of any other place like this, and that’s why I think it’s so genius.”

The U.R.B. brews two barrels per test-batch of beer, which equates to four larger kegs, much smaller compared to the 60 barrels per beer brewed in the main brewery.

“It’s a mini version of the breweries,” explains Kuplent. “So we’ll do hop trials, hop varieties, any yeast strains we may use. Beers that we think we may want to produce on a larger scale, we’ll trial out here.”

Around 100 data sets were collected in the brewery's week of soft openings alone.

“Right now, we’ve got three beers on tap, they are basically the same base beer, we’ll just try it out with three hop varieties, different fruit notes, different flavors from those hop varieties,” Kuplent says. “We have some different honey beers that we’d like to showcase, some barrel-aged beers. People are always trying to taste something new.” 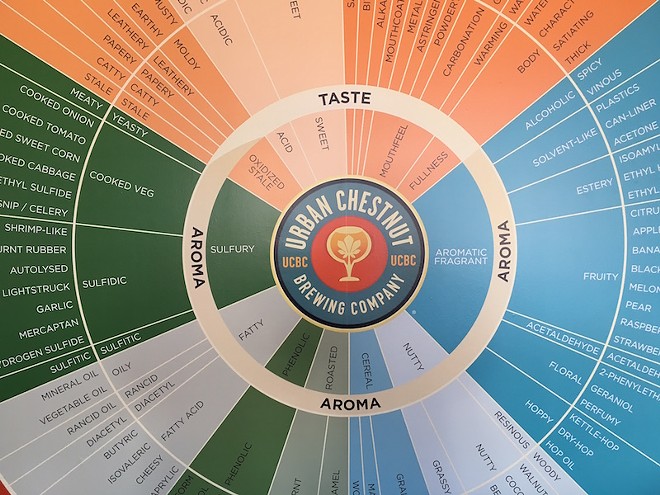