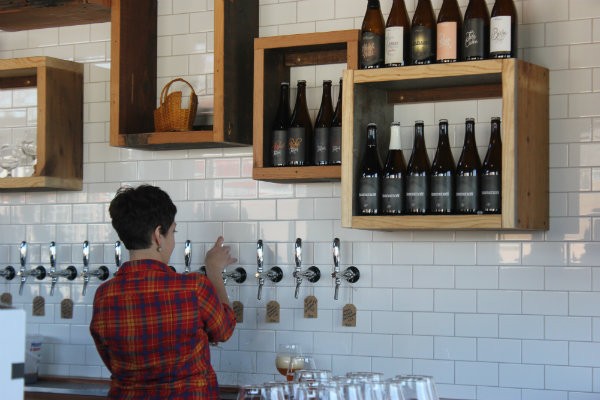 Frigid weather and ice-covered streets did little to stop the area's beer enthusiasts from descending upon Maplewood this past Sunday to check out the new brewery tasting room from Side Project Brewing (7458 Manchester Road, Maplewood).

The robust response to the opening should come as no surprise. Since founding Side Project in 2013 with his wife Karen, owner and brewer Corey King has developed a reputation for producing some of the region's — if not the country's — best barrel-aged beers. With the opening of the 2,500-square-foot brewery three months ago, King was able to enhance his production capacity; now the large tasting room makes it possible for his loyal followers to enjoy those brews overlooking the place where the magic happens.

"I'd been brewing all of my beers at Perennial where I used to work, but it came to a point where I wanted to make more beer than I had the space for there," King explains. "I started looking for a barrel warehouse, and this building came on our radar. It had the back warehouse part, but the front was retail — a great space for a tasting room. The stars aligned and now we have a brewery."

Located in the old St. Louis Closet Company space, the brewery and its now-open tasting room have eleven taps dedicated to Side Project's beers. Guests can mingle at the bar or take a seat at the communal style tables that dot the open floor plan. A secondary room, simply appointed with barrels that double as tables, looks over the beer tanks, giving guests a front-row seat to Side Project's inner sanctum. 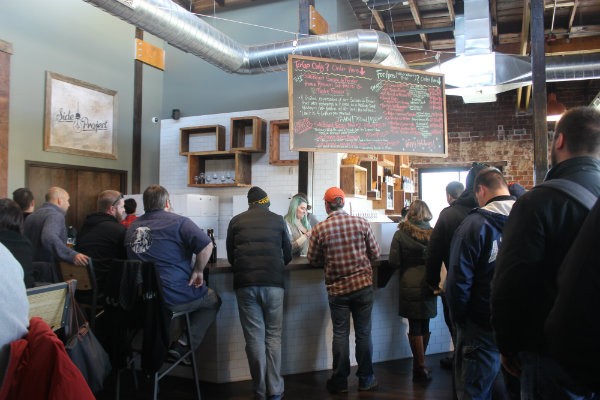 However, patrons were not simply looking for a glimpse of the new digs. In addition to the grand opening, Sunday saw the release of Side Project's allocated Foedre Fermier, a limited expression of the brewery's Saison du Fermier that has been fermented and aged in a medium toast Missouri oak folder (large barrel) with local microflora.

"When we do releases, they tend to draw a large crowd, and we just couldn't manage that large of a group at the [Side Project] Cellar," says King. "For the brewery, we just needed a bigger space."

King makes it a point to emphasize that the new brewery and tasting room are seen as compliments to the Side Project Cellar, which opened under Karen King's direction in 2014 and was a semi-finalist for the 2015 James Beard award for Outstanding Bar Program. "It's just a great drinking establishment," King says. "It's meant to be a slow-paced atmosphere where you can sit down, talk and enjoy your beer."

In addition to the Side Project beers that King will be brewing at the new facility, he has also launched a new label called Shared, which is meant to facilitate the creative spirit amongst the staff, which he feels can get lost at other breweries.

"Shared is a collective label. We'll be sharing ideas, recipes, revenue," King explains. "The main reason we are doing this is that brewers get into brewing because they want to experiment and write recipes. At breweries, though, you find yourself just pushing buttons. There's only so far you can go when you aren't the one making the decisions, and this project is meant to facilitate that. We are encouraging everyone who works with us to write recipes, come up with names and branding ideas and really share in the brewing experience."

King points to his brother-in-law, Brian Iverson, a former brewer for Goose Island who has plans for one day opening his own brewery. "When Brian develops a recipe, it will be his, and when he goes on to do his own thing, he will take it with him. This allows him to work on it while he is with us, though, so he doesn't feel like he has to sit on it and wait until he's out on his own."

King also adds that the Shared label is a way for him to be more creative as well. "I started Side Project because I wanted to make experimental beers," he adds. "And when you make them and then they do well, people want you to make them again and again — and then they are no longer experimental. This gives me another outlet."

Side Project Brewing's tasting room will be open every Saturday and Sunday from noon to 7 p.m., though it will close Christmas Eve, Christmas Day and New Year's Day.

Click through for more photos of the new tasting room. 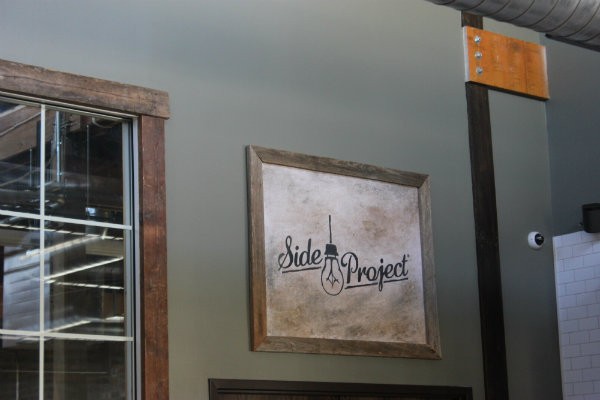