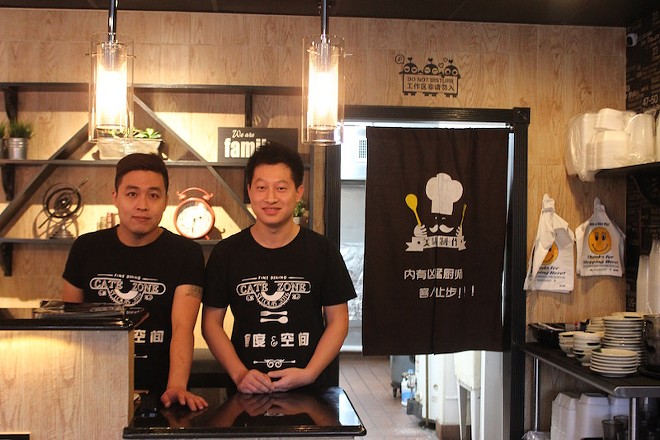 If you are used to the sort of gelatinously sticky sweet and sour pork served at Panda Express, you might resist ordering the version at Cate Zone Chinese Cafe (8148 Olive Boulevard, University City; 314-738-9923). Don't be so foolish. They have about as much in common as hot dogs have with pork belly.

The Cate Zone's version is listed on the menu as "twice-cooked pork," but it's really guo bao rou, the sweet and sour pork made famous by China's Dongbei region. In this northeastern area of the country, they dust thin slices of pork tenderloin in flour, then fry them and toss them in a lightly vinegared, ginger-rich sauce that becomes almost a second skin. The resulting pieces of meat are crispy enough that you could pick them up with your hands, but still tender. They're an eye-opener.

So, too, are the chunks of fish served, aptly, as "hot crisp fish." If you've grown to love the spicy kick you get from a piece of Nashville-style hot chicken, you'll love the batter on this fish — it's compulsively edible, with chiles you barely notice until they've rushed right past you. With a side of rice to cool your tastebuds between bites, you won't be able to stop eating.

Cate Zone opened late last month in the spot that previously held J&W Bakery, and it's already packing in Chinese college students eager for a taste of home. There's a youthful energy here that's different from most of the area's top Chinese restaurants: It's not formal or expensive (nothing on the menu is over $13.99), but it's still quite stylish: The wallpaper lists subway stops in New York City, with lighting that's a step up from Ikea but just as modern.

Co-owners Quincy Lin and Daniel Ma share cooking duties. They are't just offering entrees and appetizers — there's also a short list of "noodles & street food" and a bar where customers can assemble their own toppings for the "mala soup bowl." There's no mention of the latter on the menu, and the chalkboard that details the options is entirely in Mandarin, but they'll explain how to get started if you're interested. Just look for the small station that resembles a salad bar to the left of the front counter and then ask for assistance.

If you're hesitant to build your own dishes, not to worry: You have plenty of other options. Your server may try to steer you away from some of the truly authentic regional dishes — the menu seems to have a large number of options featuring pig's intestines, which we were told emphatically would not be to the tastes of American appetites. But no matter. At a place where even the sweet-and-sour pork is worth eating, it's hard to go wrong.