For Eric Wilkinson, Flyover Coffee Is a Labor of Love 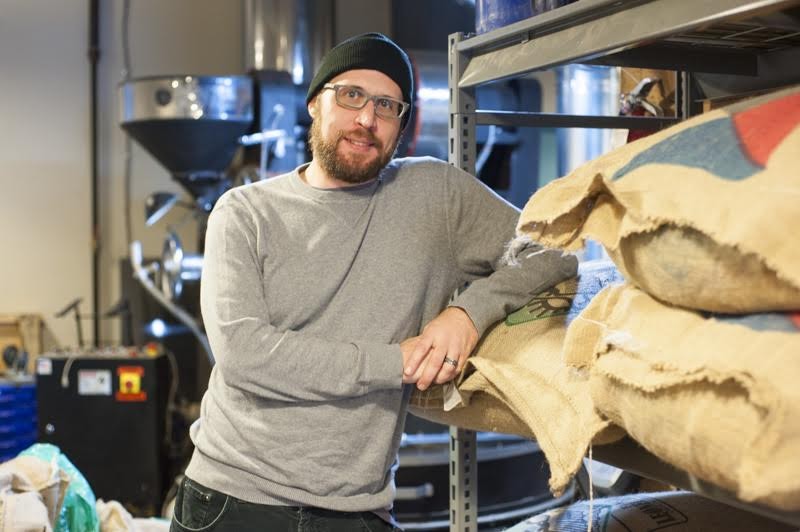 Eric Wilkinson, the founder of Flyover Coffee (www.flyovercoffee.com), thought he knew good coffee. He bought whole beans, ground them every morning and used a French press for brewing. Yet he found himself wondering one thing: Why was the coffee at his friend's house so much better?

His friend had an elaborate, professional-grade espresso machine and would make every cup to order, but he insisted that wasn't the reason for its superior taste. It was the coffee. He always bought it freshly roasted from Barry Jarrett, the owner of a small coffee and fudge shop in Fairview Heights, Illinois, called Riley's in St. Claire Square. Jarrett, his friend explained, had been roasting coffee for twenty years, well before a certain coffee chain had swept the nation. His friend suggested Wilkinson get to know him.

Wilkinson was intrigued, and started loyally buying Jarrett's product — until Jarrett got pushed out of the mall to make room for Starbucks. Seeing Jarrett go under because of a big name chain frustrated Wilkinson, but it also made him wonder: Isn't there a better way for small roasters to get their product to market?

His research told him no. "It's difficult to get coffee into the grocery stores for the little guy," Wilkinson explains. "In fact, getting it in there is the antithesis of what it means to make freshly roasted coffee."

Small roasters, he explains, treat their product as a perishable item, imprinting a "roasted on" date. Grocery stores, however, want beans to be marked with an expiration date. "It forces roasters to put on an expiration date of six months to a year out after roasting," says Wilkinson. "That's not fresh coffee."

Wilkinson knew he could do better than the ad hoc distribution channels used by small roasters, so he began Flyover Coffee, a subscription service unlike any he'd seen. His goal is simple — to get quality beans from local companies to the doorsteps of his customers within five days of roasting. Members of the Flyover Coffee club can get deliveries one, two or three times a month. Offerings come from small-scale roasters in St. Louis and around the region — Blueprint, Kuva, La Cosecha, Kaldi's, and of course, Riley's.

Wilkinson's customers range from people within the city limits who like the idea of trying different styles of coffee to St. Louis expats who miss the wealth of coffee found in "flyover country." The latter group demonstrates something Wilkinson thinks many people don't realize.

"In the Midwest there's just so much opportunity for the little guys to start roasters and flourish — you see that with all types of beverages like spirits and craft beer as well," he says. "Here, people are woken up to the fact that coffee isn't just something that is there to wake you up — well, it doesn't have to be."

Wilkinson took a break from beans to share his thoughts on the St. Louis food and beverage community, his passion for environmental causes, and what motivates his entrepreneurship.

What is one thing people don’t know about you that you wish they did?
In regards to Flyover, it really is a labor of love. I’ve been fortunate enough to build some sort of rapport with over a dozen regional roasters and roasteries, and I’m fascinated by their passion and how they each bring a piece of their personalities to their brand. In regards to non-Flyover things, I’m passionate about environmental issues and think everyone should get involved with and donate money to the Missouri Coalition for the Environment, or MCE.

What daily ritual is non-negotiable for you?
A good cup of coffee every morning, of course!

If you could have any superpower, what would it be?
I’d like to have the ability to slow down time so I could get more done.

What is the most positive thing in food or beverage that you’ve noticed in St. Louis over the past year?
I’ve seen more food be more accessible to more people than ever before. I also know, from my work with MCE, that eating local does make a big difference; not just for the sake of the ecology of the region (our Big Ag monoculture and CAFO farms are terrible for the environment) but also for the economy. There really is minimal local economic impact from Big Ag, and there are tons of drawbacks. So I’m glad to see people continuing to eat and serve local when possible.

Who is your St. Louis food or drink crush?
Scott Carey at Sump. While he is not (yet!) a roaster I ship, his business model and ethos make me proud of St. Louis and the St. Louis coffee scene in particular. He has been able to bring a level of awareness about coffee to St. Louis that few people would have thought possible, and he has been successful at it while seemingly breaking all the “rules” of what a coffee shop is supposed to be and how you are supposed to operate a business.

Which ingredient is most representative of your personality?
Cinnamon. Or cumin. I’m not sure why I said that, though. They are hard to stomach by themselves but are pretty consistent and compliment things well. They aren’t like a tomato that can be wonderful or terrible depending on the day and source. Or, who knows: Maybe I just like them a lot and feel they are underappreciated.

If you weren’t working in the coffee business, what would you be doing?
Well, the coffee business isn’t my full-time gig. I have a day job in film and video production. I do the coffee club (and also the tea club for the London Tea Room) because I feel this stuff is underappreciated and because there is no really great way to distribute fresh specialty coffee, especially for smaller roasters. But if I could somehow make a career out of scuba diving the oceans and floating the rivers of the world, then I’d be doing that.

What is your after-work hangout?
My house with the kids.

What would be your last meal on earth?
I don’t know; I haven’t had it yet! But hopefully homemade pizza with sourdough crust, made and consumed with my wife and kids.