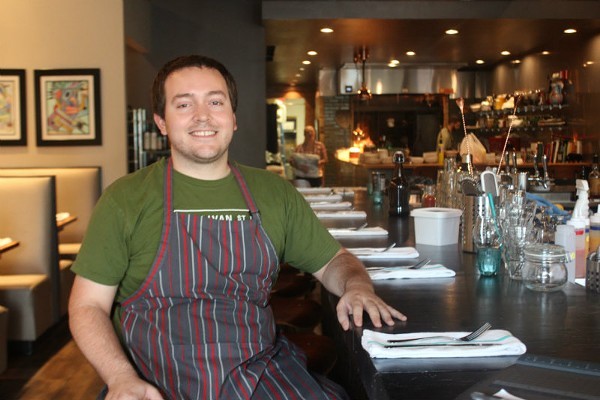 Bryan Russo, the sous chef at Público (6679 Delmar Boulevard, University City; 314-833-5780), didn't know how good he had it. Growing up with Italian grandparents on both sides of the family, he was always eating fresh, from-scratch food. It wasn't until he got older and started eating on his own that he realized how special this was.

"I remember going to the grocery store and getting the canned biscuits — the ones that pop when you open them," Russo recalls. "They were nothing like my grandmother's and I would think to myself, 'What's the difference?' Then it hit me that the difference is they were fake and processed and fortified with all sorts of crap and hers were made with real ingredients. The more and more I realized this, the more I knew that this was what I wanted to do."

Russo's love of food has always been a force in his life, but when he discovered music, he thought that was his true calling. When he realized he couldn't make money doing the sort of music he wanted to do, he decided to pursue cooking. He took a year off after high school and worked at Red Lobster, thinking it would teach him something.

It did, but it wasn't the lesson he intended.

"I learned how to work in a super-fast environment and just get by pushing out food," says Russo. "And I knew that wasn't what I wanted to do."

He enrolled in Le Cordon Bleu culinary school and began getting jobs that allowed him to work with fresh ingredients, first at Nordstrom's bistro and then at a health food restaurant. Through the latter, he met Público's executive chef Brad Bardon, who was working as chef de cuisine at Harvest at the time. Bardon hired Russo to join him. That's when the young chef's eyes really opened to what is possible.

"I think there were maybe two cans in the entire place," recalls Russo. "Everything was made in-house there. And we used fresh, peak of the season ingredients, made our own breads and charcuterie, broke down whole animals. I learned so much working under Brad."

After Harvest closed, Russo went on to Dressel's Public House but kept in touch with Bardon. When Bardon approached him about a position at the soon-to-open Público, he was ready to take the leap.

"Since we do everything over a wood fire, there is no gas line or oven. You have to really think about new ways to do things," Russo explains. "You really have to think out of the box to work here. It's been really satisfying being thrown out of my comfort zone."

Russo has worked his way up to sous chef at Público, but he's not concerned with the title or what's going to come next. He's just happy to be cooking real food and learning something new every day. "I'm so thankful," says Russo. "I can get up every morning and make a living doing what I love."

Russo took a break from that scorching hot fire to share his thoughts on the St. Louis food and beverage community, his passion for bread and why everything always comes back to his grandma's soup.

What is one thing people don’t know about you that you wish they did?
Outside of the kitchen, I’m a musician and all around music fan. I play bass guitar, guitar, drums – all self-taught. I also have a passion for baking breads. It’s one of my favorite foods, and there so many varieties and ingredients like interesting wheat and grain varieties to play with.

What daily ritual is non-negotiable for you?
I have to have some sort of caffeine in the a.m., whether it’s coffee or green tea. I also drink a lot of water — a gallon a day, easily.

If you could have any superpower, what would it be?
There’s a lot of them that I could say, but I would probably say the omnipotent powers of Q from Star Trek: Next Generation. He’s a boundary manipulator, so he’s pretty much all-knowing about everything.

What is the most positive thing in food or drink that you’ve noticed in St. Louis over the past year?
The rise of real bread. Many think farm-to-table for other things like vegetables and meats, but not bread. People like Ted Wilson from Union Loafers and even Companion Bread find these cool varieties of local grain and are creating an amazing product. We grew up with some really crappy bread. I definitely feel like cutting out enriched flours and artificial ingredients in bread (and all foods) is becoming more and more important to people.

Who is your St. Louis food crush?
Again, Ted Wilson from Union Loafers. He’s the kind of person that I've been waiting to see in St. Louis — making real awesome, rustic breads with slow fermentation and local grains. It is an Old World-style craft that creates super simple but complex food.

Which ingredient is most representative of your personality?
I’m going to go with millet. It has a high tolerance to extreme working conditions – it’s hot by the open fire at Público!

If you weren’t working in the restaurant business, what would you be doing?
Definitely a musician or something in the music industry. I’d like to be in a band, but it’s hard to make it doing the music that you want to do, so I’d probably be in the studio business or represent a music-affiliated product like guitars.

Name an ingredient never allowed in your kitchen.
There are several, but the top two for me would be margarine and food dye – too many weird health-related links to both.

What is your after-work hangout?
When I do go out after work, definitely the Crow’s Nest. Even if I don’t go there a lot, they know me, and I’m a huge metal fan so it suits me there.

What’s your food or beverage guilty pleasure?
A buffet – doesn’t matter what kind.

What would be your last meal on earth?
My grandma’s soup. It was always an Italian Wedding-style soup with whatever she had around the kitchen. Little meatballs, whole chicken, couscous or pasta — just fresh ingredients and not overly salty like out of a can. I didn’t realize it as a kid, but now I think, oh man, this is real food!