With a Restaurant and Event Space, Big Brothers Big Sisters Expands Its Mission

Becky Hatter, president and CEO of Big Brothers Big Sisters of Eastern Missouri, acknowledges that people might wonder about the organization’s plan to open a $4.2 million restaurant and event space.

“Why would Big Brothers Big Sisters build that rooftop, put in a kitchen — because we are not in the food industry,” says Hatter with a Southern twang.

She then explains her beliefs about the power of food and her experiences at the dinner table in her hometown of Boyce, Louisiana, population just north of 1,000.

“The mission is to put caring adults in the lives of children, so we really needed this space where we could build more relationships and recruit volunteers. … And the truth of the matter is, everyone builds relationships around the table,” Hatter says. 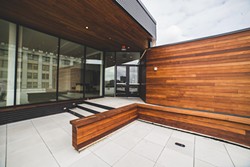 The project, ANEW Rooftop and Test Kitchen, is expected to open gradually over the next month at the organization’s headquarters on Grand Boulevard next to the Fox Theater.

It may sound like the nonprofit is taking a detour from its primary goal, but there is precedent at organizations elsewhere in the country. And Hatter has lined up chefs with some name recognition to cater the event space. She is confident about what the two food-centric spaces will add to her organization and the local food scene.

At the top of the building, ANEW Rooftop will serve as a special event space. On the bottom floor, Test Kitchen will operate as a restaurant serving up breakfast and lunch.

Leaders of the organization had originally discussed building a rooftop deck after the purchase of the building on Grand in 2005, Hatter says. But shortly after the organization completed a rehab of the property and moved into the space, the economy entered a recession and plans were put on hold. Then in 2012, when the economy had rebounded, Hatter and board members restarted plans.

The rooftop, Hatter says, will allow the organization to host events with donors, volunteers and the “littles.”

Or for example, Big Brothers could host an event on Mother’s Day to honor parents of children helped by the organization. The rooftop can also be rented for private events. Hatter also emphasized the panorama from the rooftop, which can accommodate 250 for a cocktail party or 120 for a sit-down dinner.

“You have views all the way down to (South Grand). You get the whole look of North Grand, with all the neon lights and the theaters, and then you can also look to the west and see the Central West End,” she said.

The organization is hosting a series of opening events at ANEW in the next month. Meanwhile, the ground floor cafe Test Kitchen is expected to open in early December, with regular hours on weekdays from 7 a.m. to 2 p.m. A cast of chefs will create breakfast and lunch menus and rotate every four months.

Corey Smale, co-founder of Strange Donuts, has been hired as creative director at ANEW. For the event space, he has lined up resident chefs David Bailey of Bailey’s Restaurants; Holly Cunningham of Hollyberry Catering and Nourish at Home; Kelly Spencer of the Social Affair; and James and Pat Allen of Celebrations, a restaurant in Cape Girardeau. For Test Kitchen, Hatter said the organization is finalizing contracts with its first chefs and was not ready to disclose names.

Big Brothers Big Sisters is not the first nonprofit to try such a venture. Restaurant Opportunities Center United, an organization that aimed to help World Trade Center restaurant Windows of the World workers after 9/11, opened Colors, a restaurant in New York to provide training and livable wages to workers. It opened in Manhattan in 2006 and a year later, The New York Times reported that the restaurant was struggling to fill tables. But it later switched to a gluten-free menu and has now been open a decade. Other non-profit organizations have opened franchise locations like Papa Murphy’s or Blimpie's to mixed success.  The musician Moby opened a vegan restaurant earlier this year in Los Angeles and pledged to donate all profits to animal welfare organizations.

For ANEW, the organization received $750,000 in New Market Tax Credits and raised the remainder of the cost through private donations. Hatter said she hopes the restaurant will provide jobs for children and young adults who have been in the program. While the eateries are officially non-profit, she expects the venture to make money, with ten percent of proceeds from the two eateries going back to Big Brothers Big Sisters.

“We have no concern about it being a break-even operation,” she says.

But, she adds, the point is not to generate revenue. “We weren’t sitting around saying, ‘How can we raise more money?’"

Instead, Hatter again points to the dinner table.

“In my experience, the table and the chair and another person, that’s where life exists,” she says. “And that’s what Big Brother Big Sisters is all about.”