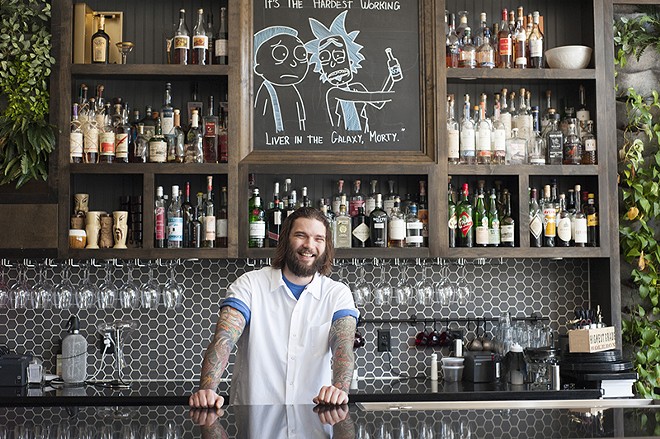 The new executive chef at Blood and Sand (1500 St. Charles Street, 314-241-7263), Christopher Krzysik, remembers the exact moment he decided to be a chef. "I was a military brat and lived in Japan when I was little," he recalls. "When we came to Missouri, I was super into anime. I was twelve, and my mom suggested I watch this show called Iron Chef. It was an episode where Morimoto went up against some old-school Japanese chef. I was so enamored that I learned how to make miso soup. It was the first meal I ever cooked for anyone — and it was awful!"

The enthusiasm about cooking stuck with Krzysik, though he wasn't exactly charting out his career goals in his early teens. However, he gravitated toward the food business for his first job, a place that could not be further removed from his current position at Blood and Sand. "On the day I turned sixteen, I walked down to the combination A&W-Long John Silver's," Krzysik recalls. "This was Robertsville, Missouri, and there weren't that many places. I was just excited to work, but even there I started to see that it takes a very strong work ethic to work in restaurants. That's where I learned the most important lesson in a kitchen: That if you have time to lean, you have time to clean."

Krzysik credits his less-than-glamorous beginnings in the business — he also worked at McDonald's, Steak 'n Shake and as a dishwasher in an enormous banquet kitchen on a military base — for instilling in him a strong work ethic and knowledge of all aspects of the business, from the bottom up. He knew he had to up his game if he wanted to make cooking a career, though, so he enrolled at L'Ecole Culinaire and was as hooked as he was the first time he saw Iron Chef.

Cooking school opened opportunities for Krzysik, including his first upscale restaurant gig working for chef Anthony Devoti at Newstead Tower Public House, and later Five Bistro. Krzysik worked for Devoti for three and a half years before leaving for Blood and Sand. He's left and come back a few times — with stints at Central Table, Blood and Sand's sister concept Death in the Afternoon and the upcoming gastroLab. Even though he has plans to open his own place one day, he knows he's where he is supposed to be.

"It's just really exciting to be in this position at the place I've come up in," says Krzysik. "We're really taking it places."

Krzysik took a break from the kitchen to share his thoughts on the St. Louis dining scene, his pre-shift ritual and why nothing is off-limits in his kitchen.

What is one thing people don’t know about you that you wish they did?
I can achieve the impossible. You can too.

What daily ritual is non-negotiable for you?
Yoga. I attend classes at Urban Breath on the weekends and practice at home the rest of the week. Sometimes, we even have a session before a busy service.

If you could have any superpower, what would it be?
Teleportation. If you grew up with Dragon Ball Z, you can understand the possibilities this presents in a busy kitchen. I aspire to own a few restaurants one day, and this ability would be pretty handy by then.

What is the most positive thing in food, wine or cocktails that you’ve noticed in St. Louis over the past year?
The variety of food in town is very exciting. I'm proud of the development of a lot of local establishments and their expansion, even to other cities. St. Louis was the Gateway to the West. Now, geographically, I think our country is culturally looking inward. St. Louis' next identity should be the epicenter of this generation.

Who is your St. Louis food crush?
If the question is directed toward a restaurant, then Southern — even now, I find myself salivating for a "Cluckin' Hot" two-piece. If the question refers to a person, however, then it's Adam Guess, the chef at Death in the Afternoon. I'm engaged to D.I.T.A. general manager Eva Martiny, but Adam and I will always have Hall and Oates late-night dance parties.

Who’s the one person to watch right now in the St. Louis dining scene?
William Pauley, proprietor of gastroLab in the Grove. You'll always come across an ingredient or preparation you never even heard of. The whole city is waiting in anticipation for his kombucha. I'll be keeping a keg in my walk-in.

Which ingredient is most representative of your personality?
Chiles — sweet, exciting, versatile, colorful and fiery!

If you weren’t working in the restaurant business, what would you be doing?
I'd be a surgeon. I was inspired to become a chef because I watched Iron Chef. If I had watched Grey's Anatomy sooner, things may have been different.

Name an ingredient never allowed in your kitchen.
There are plenty things I might turn my nose up at, but I will never tell my crew they can't try something out. Just because I'm not a fan, doesn't mean someone else won't love it. Our pastry chef, Riley Stahl, wanted to serve Dunkaroos for dessert, and [the owners] didn't want us to — so we made a Dunkaroos dessert.

What is your after-work hangout?
Stella Blues. Great vibes, kimchi pizza, cold brews. The after-party happens at my apartment. We have a star projector on the ceiling and Eva can read your tarot while we listen to our wedding playlist.

What would be your last meal on earth?
A meal in Isaan, Thailand, sitting in a plastic chair at a pit stop on a dusty trail. Pandan-flavored water, sticky rice, som tum, nam phrik and many other dishes I can't pronounce or identify.