Firefighters Battle Blaze at the Sweet Divine in Soulard 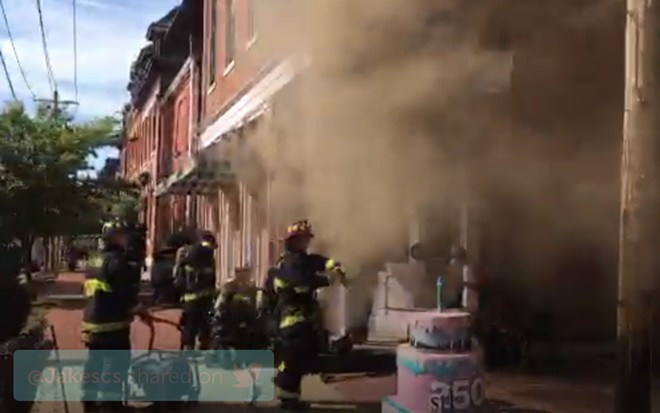 10:04 p.m. Updated with more details about the fire and a message from the owners.

The owners of The Sweet Divine (1801 S. Ninth Street, 636-942-2900) promised to reopen "absolutely as soon as possible" after the famed bakery caught fire this morning in Soulard.

Firefighters were still on the scene shortly before noon as smoke poured from the popular shop, which has been featured on Food Network's Cupcake Wars.

St. Louis Fire Department spokesman, Captain Garon Mosby, broadcast footage of the scene live on the mobile app Periscope, telling viewers they were battling flames in the kitchen but it wasn't clear if that was the source of the fire.

"This might have started in the basement and worked its way up," Mosby said.

Omg!!!!!! Please pray that everything is ok with our building!! https://t.co/gfdArFxStK


Fire investigators were later able to determine the fire did begin on the first floor. Mosby told the Riverfront Times it seems to have started from a malfunctioning compressor on the bottom of a refrigerator. The flames spread through the kitchen and burned through the floor into the basement.

Firefighters were able to knock down the fire before it made it much farther, but the black smoke filled the rest of the building.

"There was decent damage to the kitchen and smoke damage throughout," Mosby said.

The Sweet Divine was closed at the time of the fire. The owner had left at 9 a.m., and firefighters were notified about 11 a.m., Mosby said. Two upstairs tenants were away at work. The cause of the fire is considered accidental, Mosby said. No injuries were reported.

The Sweet Divine started on Kingshighway in south city and moved to Soulard in 2013. It was already nationally known by then after appearing in July 2012 on Cupcake Wars.

An employee who answered the phone on Monday afternoon said they were still trying to sort out what had happened. In a Facebook message later that night, the owners thanked supporters for "well-wishes, prayers, and positive vibes."

And they promised to return.

"We plan to be up and running absolutely as soon as possible, and look forward to continuing to serve St. Louis some of the best sweet treats around!" the message said.