CigarBQue Is Gathering St. Louis' Top Chefs — and Cigars — For Just One Night 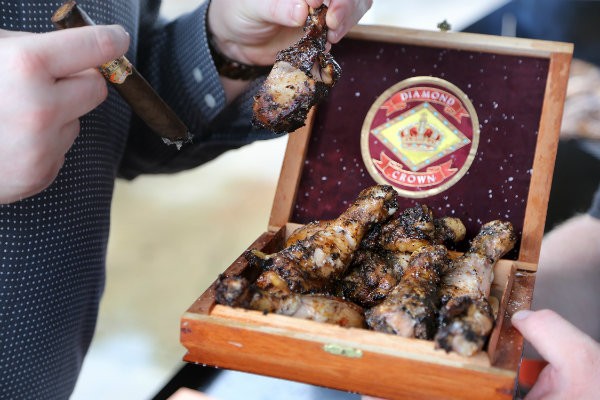 If your idea of a cigar is limited to a post-meal indulgence, CigarBQue hopes to change your mind — perhaps with a loaded potato bacon blunt.

The nationwide celebration of cigars, 'que and booze makes its way through St. Louis this Thursday with a stop at Atomic Cowboy (4140 Manchester Avenue; 314-775-0775) — and they haven't just assembled any old crew. The event features the city's top pitmasters and bartenders: No less than Mike Emerson, Skip Steele, Tony Saputo and Chelsea Little will be serving up food and drinks meant to complement, and at times incorporate, cigars. Don't plan on smoking a stogie? Sugarfire's Mike Johnson has you covered. He will be on hand with his (certainly Snoop-approved) loaded potato bacon blunts so you don't feel left out.

CigarBQue originated in Chicago in 2012 with chefs Rick Gresh and Cleetus Friedman carrying on at a backyard barbecue. "They were just sitting around with their other chef friends, grilling, smoking cigars and drinking and thought, 'Hey, we should turn this into a proper event,'" explains CigarBQue's event manager Jen Lover. The event was so successful in the Chicago area that they decided to turn it into a nationwide tour last year.

This year marks the first time St. Louis will host the event, and Lover says it's a natural fit. "St. Louis knows its barbecue," she notes. "In some cities, they will mix up grilling and smoking and thinks it's all the same thing. But that doesn't happen here."

"Probably half the people who come to the event have never smoked cigars and will smoke here for the first time," says Lover. "But even if cigars aren't your thing, you'll still have a great time."

Here is what's on the menu.