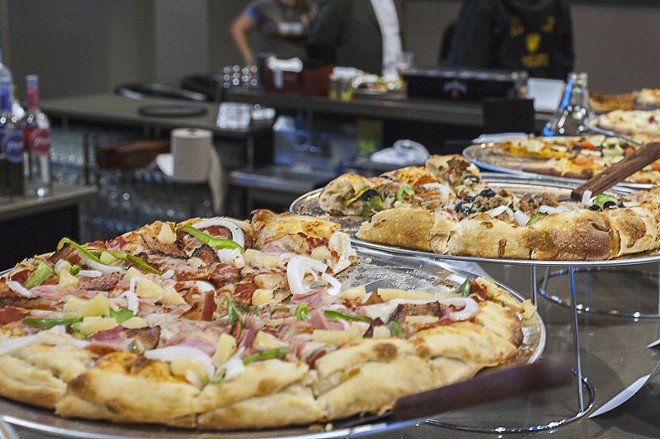 The newest restaurant to open downtown is serving a new kind of pizza that would only make sense in St. Louis – and we're not talking about the thin-crusted Provel-topped version at Imo's.

No, we're talking about a pizza whose crust is made of toasted ravioli.

This invention is being served at the Sliced Pint Tap & Pizza (1511 Washington Avenue), which opened its doors Friday in the Eastbank Building. The toasted ravioli-stuffed crust is an option you can add to any pizza on the menu for an extra $3 to $10, depending on the size – or use it to create your own custom pie.

The t-rav pizza was invented by the restaurant's co-managers, Joe Vicks and Joe Hart. But I stumbled across it during the Sliced Pint's media sneak peek Thursday. When I arrived, I wasn't aware of the specialty crust. My editor just passed me a flyer offering beer and pizza. Who says no to that?

Like a kid in the candy store, I went straight to the toppings I like. They had my favorite pizza – the Hawaiian, only they called it “the Oasis” and added bacon and green pepper. (There's a rock band theme going on at the Sliced Pint.)

I bit into the pizza, but then found myself holding back the slice to inspect it.

There's sausage in this crust?!

I should mention at this point that I was a vegetarian for nearly ten years and still have issues putting meat on my pizzas. It wasn't until the last year that I EVER put meat on pizza. It pretty much ends at ham and bacon. I was not prepared for this mystery meat in my crust.

And yet as I was reluctantly chewing, I found myself captivated. Beneath the toppings and cheese was a thin layer of crust, then that instantly familiar mix of ground pork, sausage and beef, and then, and only then, the real crust. It's like a t-rav layer in the middle of a pizza sandwich.

That familiar finely minced meat, wrapped in a case of dough ... oh my God it's a T-Rav pizza crust – I found myself shoveling the rest of the slice into my mouth.

It's better than you think it would be. It's a crazy mix of flavors that actually works. It's the ultimate St. Louis-inspired guilty pleasure.