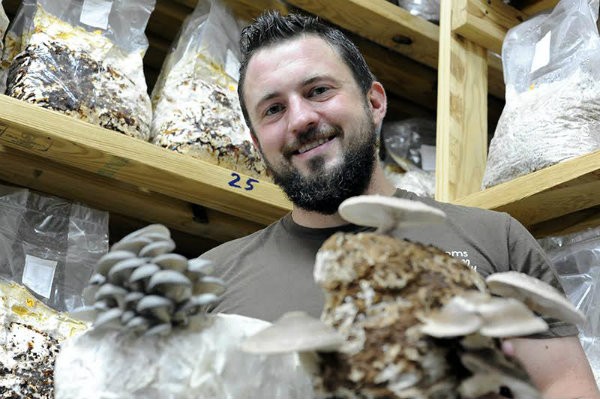 JT Gelineau laughs as he recalls his wife's horror at his basement mushroom startup.

"It was wintertime in 2012, and my wife and I were in a new house. I couldn't garden outdoors, so I started looking around online and found this build-your-own mushroom kit," Gelineau recalls. "It started out as a small basement project, but eventually my basement turned into a small-scale mushroom farm. My wife thought I was crazy — like a mad scientist. She didn't come down there."

A chef for more than a decade, Gelineau used mushrooms on almost a daily basis to create elegant plates at Bellerive Country Club in suburban Town and Country. As he got into the cultivation side, however, he realized he knew nothing about them.

"Mushrooms, like charcuterie or cheese-making, have this deep mysticism about them that you never really understand until you start growing them," Gelineau explains. "I think it has to do with how scientific and controlled the whole process is. But also, when you see it firsthand, you see how much mystery there is in it all — they're not a plant, but they're not an animal. They have their own way of growing and digesting and evolving that is really hard to explain. You just have to see it."

Before his deep dive into mushroom cultivation, Gelineau was not only a chef at a respected country club, he was also the captain of the U.S. Junior Culinary Olympic team. At the same time his mushroom business took off — he was selling to clubs and a few restaurants around town — he received a promotion to executive sous chef at Bellerive. Balancing the two gigs was too much for him, so he stopped his mushroom business for a year.

It ate at him.

"I kept thinking to myself that if I don't do this now, I will probably get an executive chef job somewhere and never do it," Gelineau says. "So I got together a business plan, shot ideas back and forth with my dad, looked into zoning and got approved for a loan. I was going full-blast, and then we found out my wife was pregnant. Here I was at the club with health insurance and a 401(k). We decided to go for it, but it was really nerve-racking."

Today, his business Mushrooms Naturally is one of the city's leading providers of fine mushrooms. But most importantly, Gelineau is happier than ever. "I don't work any less than I did in the kitchen, but the quality of life is exponentially better," he says. "I get to see my kids at night, which is something most chefs get to do maybe once a week."

Gelineau took a break from the mushroom farm to share his thoughts on the St. Louis food and beverage community, how he'd use the gift of flight and why Imo's always brings him back to his roots.

What is one thing people don’t know about you that you wish they did?
I was a chef at Bellerive Country Club for eleven years and the captain of the U.S. Junior Culinary Olympic team in 2008 before I started growing mushrooms full-time.

What daily ritual is non-negotiable for you?
Morning coffee is the first thing that comes to mind, but I'm pretty routine about a lot of things.

If you could have any superpower, what would it be?
Flight would be pretty sweet. It would make mushroom hunting a lot easier, ha!

What is the most positive thing in food, wine or cocktails that you’ve noticed in St. Louis over the past year?
The trend, which I think is actually more of a realization of quality and community, is local food and craftsmanship — the emergence of small businesses and craftsmen focusing on one or two things and doing them well. This ideal was always in me; it now just comes through fully with my business.

Who is your St. Louis food crush?
Imo's. That was one of my first food-related jobs and will always bring me back to my roots.

Who’s the one person to watch right now in the St. Louis dining scene?
Ben Grupe. I don't think a lot of people know about him yet, but now that he is at Elaia, that's going to change.

Which ingredient is most representative of your personality?
Well, I'd have to say mushrooms of course. They're sought-after, elusive, respected, mysterious, intriguing, delicious, and take a deft hand to control.

If you weren’t working in the mushroom business, what would you be doing?
Well, if I wasn’t growing mushrooms, I'd be back in the kitchen. I still feel the pull. Now my friends and family just benefit most from it. I haven’t given up on the idea of having a place one day, just not today.

Name an ingredient never allowed in your kitchen.
Convenience products. If I can’t make it, I don’t need it.

What is your after-work hangout?
Home with the wife and kids. I'm old.

What’s your food or beverage guilty pleasure?
Ice cream or pizza. I've been eating dairy-free recently, so those things taunt me.

What would be your last meal on earth?
An aged ribeye medium-rare, roasted hen of the woods, and a twice-baked potato. That or a Jumbo Jack and four tacos. That’s a tough one.