Acclaimed Chef Rob Connoley on Returning to St. Louis and Preparing to Open a Restaurant 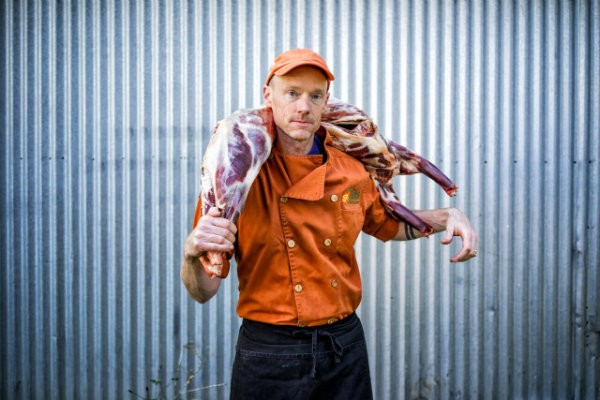 Rob Connoley didn't start foraging because he was following the trends or trying to emulate an acclaimed Danish chef. He did it out of necessity.

"At first, I started out with a soup and salad cafe, but it wasn't challenging for me for a lot of reasons," the James Beard-nominated chef says of his New Mexico restaurant, the Curious Kumquat. "I started doing the dinner side, which tapped into my interests — that's when the molecular gastronomy and locavore movements were taking off, so I jumped right in. But the foraged food aspect evolved because I lived in such a remote community. I didn't have the luxury of local farmers and food purveyors for seasonal ingredients, so I looked to the Apache culture to learn about foraging. At that point, the dinners just evolved."

For Connoley, the evolution of his kitchen is in line with the larger professional changes that brought him into the restaurant business in the first place. A Bridgeton native, Connoley spent eighteen years in nonprofit management, which moved him around from town to town and ultimately to the tiny town of Silver City, New Mexico. Tired of having to "follow the grants" in the nonprofit business, he and his husband Tyler decided to open a gourmet grocery store as a way to settle down in one place. About three years into the business, their store, also called the Curious Kumquat, was doing so well that they decided to open a restaurant component. They hired a chef while Connoley ran the operations. Then, his chef got pregnant about three months in and decided to leave. Connoley had no choice but to take over the kitchen himself.

"I had never worked in a restaurant before, but I was familiar with food and just jumped in," Connoley recalls. "With the exception of pastry — I've had a few advanced trainings with French chefs — I am totally self-taught."

The Curious Kumquat went on to be a phenomenal success, with diners visiting from New York and Los Angeles just to get a taste of Connoley's cooking. Gastronomica and the New York Times took notice, as did the James Beard Foundation when they nominated him for Best Chef: Southwest in 2014.

Despite the accolades, Connoley felt the need to come back to his native St. Louis so he could be close to his family. He closed the Curious Kumquat this past summer and moved back to town with plans of opening a restaurant some time in 2017. "I've been gone 30 years, and I'm just at the age where it was time to come back," Connoley says. "But from the food side, it's such a good time to be back, because so much is going on. There are so many great chefs and great restaurants here. I'm just really excited to come in and do my thing with them and be a part of it."

Connoley explains that his vision is for "something special — that people will tell their coworkers about on Monday morning." Ideally, the restaurant will be offer small, ticketed seating nightly, where his guests will be seated at a table around him as he cooks. "It will give me a chance to tell the story of the food but also have the fun of a social setting," Connoley says. "It will draw upon my passion for foraged food, and it will be a tasting menu, but I don't want people to get hung up on that term. I don't want it to be old and stale, but about the immediacy of the ingredients. I'm not doing a tasting menu just for the sake of drawing out twenty chef orgasms."

Until then, Connoley will be traveling in support of his book Acorns and Cattails. This, too, was a project he never had any intention of doing.

"I had people ask me all of the time if I was going to write a book and I kept saying no," he says. "But finally I decided to put some stuff together and see if it would work. It's none of that funky chef school stuff though. The whole point is if you want to go out into your backyard and gather some acorns, I'll show you what to do with it."

Connoley took a break from his book tour to share his initial impressions on the St. Louis restaurant scene, his love of thin air and why you should always check your labels.

What is one thing people don’t know about you that you wish they did?
I definitely suffer from Imposter Syndrome. Hardly a day goes by when I think I truly deserve the accolades and successes I’ve had over the years. I can have 99 glowing Yelp reviews, but the only one that sticks with me is the one negative.

What daily ritual is non-negotiable for you?
A cookie a day keeps the chef happy. A big one.

If you could have any superpower, what would it be?
The ability to live without air – underwater, climbing mountains, everywhere. Air holds me back in so many ways. That and the need to sleep and eat. Pesky basic human needs.

What is the most positive thing in food, wine or cocktails that you’ve noticed in St. Louis over the past year?
Even down to the most humble restaurant, every chef understands the value of good farm-fresh food. I’m also really excited the chefs are willing to take risks in their repertoire and try new cuisines. That experimenting can only lead to an amazing future for town.

Who is your St. Louis food crush?
Ryan Maher of Missouri Wild Edibles, forager and chef. He gets the importance of a chef being connected with their food. He understands seasons and how eating seasonally is so important to our bodies and our planet.

Which ingredient is most representative of your personality?
Butter. Butter is versatile in sweet and savory foods. It’s a workhorse.

If you weren’t working in the restaurant business, what would you be doing?
A park ranger in Alaska, or if I was a few years younger, a climbing guide. I could spend every waking moment in the mountains ... emerging every now and then to have a few beers.

Name an ingredient never allowed in your kitchen.
Fake maple syrup – check your ingredient labels, people! So often your “Pure Maple” is actually corn syrup, caramel coloring and maple flavoring.” Pisses me off!

What is your after work hangout?
My dogs demand walks. Before I returned home to St. Louis, we lived in a small, remote mountain town in New Mexico, and every single day our spoiled pooches would get two to three hours of remote mountain hiking. We’re having to adapt to the sidewalks and crowded parks, but the dogs still demand the mileage. Keeps me in shape.

What’s your food or beverage guilty pleasure?
Now that I’m back in town the answer is easily gooey butter cake. I love even the worst of them.

What would be your last meal on earth?
Mashed potatoes. Plenty of butter. A Close Encounters-sized mound of mashers!