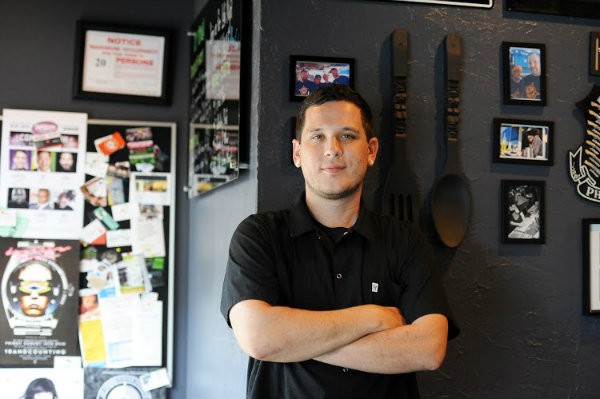 Brian Coltrain of Guerrilla Street Food (3559 Arsenal Street; 314-529-1328) traces his culinary story back to his time shucking corn in Warner Robins, Georgia. "It all started when I was probably five or six," he recalls. "One of my distinct memories growing up was of the couple across the street who grew corn. They used to give some to us, and I remember how much I loved to shuck it — I just loved the feel of it, and of course eating it."

Coltrain's family moved to Cape Girardeau, and eventually St. Louis, when he was eight years old. When he got old enough, he started working the typical jobs of a teenager in the west county 'burbs: KFC, Einstein's Bagels. And like most kids that age, he had no clue what he wanted to do with his life. He drifted for a year after high school, until his parents suggested he look into culinary school. "I never thought of it as a profession, but it just clicked," Coltrain says. "After the first course, I knew it was what I was meant to do. It was a cool epiphany."

Coltrain worked his way through some of the top kitchens in St. Louis — Yia Yia's, Mosaic, Niche. He first met Brian Hardesty and Joel Crespo of Guerrilla Street Food when he was working at the now-shuttered Table. Hardesty and Crespo were using Table's kitchen as a commissary for their new food truck, giving Coltrain a chef's table seat to the Filipino fare they were introducing to the St. Louis area.

Coltrain and Hardesty found themselves reunited in the kitchen as part of the opening team at Element. The two clicked, forming a friendship that would continue well after Hardesty left Element to dedicate himself full-time to Guerrilla Street Food. When Coltrain departed last year, it wasn't long before his old boss reached out to him with some big plans for Guerrilla Street Food.

"They are getting ready to open a few new locations here in St. Louis and are planning on expanding to Chicago," Coltrain explains. "They needed someone to run their kitchen because they want to be super-careful that they do this without sacrificing who they are. I came in for an interview with Brian [Hardesty] and we just ended up talking about the future. It seemed like a really good fit."

In his new role as chef de cuisine, Coltrain is in charge of overseeing the kitchen at the brick and mortar location on Grand while Hardesty and Crespo update Guerrilla Street Food's already popular repertoire. The team is especially excited about a spit-roasted whole pig on Saturdays (which Hardesty can be seen tending to right off Arsenal Street), their new wine, beer and spirits program and monthly brunch pop-ups.

Coltrain admits there was a little bit of a learning curve when he started, but he is quickly becoming proficient in Filipino cuisine. "I've always loved this style of food, and now that I am here it's been nice to learn and educate myself."

Coltrain's been busy in the kitchen making the new "All City Burger," a mouth-watering patty of ground brisket and chuck, housemade Thai chili cheese, calamansi mustard, pickled cucumber and onion on a lard-toasted bun. He spared a few minutes to share his thoughts on the St. Louis restaurant scene, secret handshakes and the sweet burn of Totino's pizza.

What is one thing people don’t know about you that you wish they did?
I'm very much an introvert. I've worked really hard to become more social and outgoing.

What daily ritual is non-negotiable for you?
My secret handshake with my daughter, Delilah. Every morning before I go to work we have our special handshake, which is secret so I can't share it.

If you could have any superpower, what would it be?
I'd clone myself so I could be researching, and working and hanging out with my family all at once.

What is the most positive thing in food, wine or cocktails that you’ve noticed in St. Louis over the past year?
The huge increase in collaborations and friendships between business owners and the people they serve.

Who is your St. Louis food crush?
My wife, Meaghan. She has worked at so many amazing places including Niche, Pint-Size, Element and currently the Missouri Athletic Club. She really shows that pastries and baking are equally as technical and important as the savory kitchen.

Who’s the one person to watch right now in the St. Louis dining scene?
Rick Lewis. Quincy Street was and still is amazing. Southern is one of the most solid places I've eaten at. Whenever I see him, he is greeting guests and being so friendly all while he is running a successful restaurant. I can only imagine what is next on the agenda.

Which ingredient is most representative of your personality?
I think curry represents me very well. It can be basic and what is needed at the time, or it can be insanely intricate and exotic all depending on what is needed. It can fit any occasion.

If you weren’t working in the restaurant business, what would you be doing?
I would be a wild man! I would live off of the land, foraging and hunting for what my family and I need to survive. Nature is key for healthy living.

Name an ingredient never allowed in your kitchen.
I've never met an ingredient without a use. I've seen Hawaiian Punch used as a sauce for pork belly. I've even enjoyed truffle oil, on occasion, when it's with fries, Parmesan and cracked black pepper. Every ingredient is an opportunity to learn and create.

What is your after-work hangout?
After work, since I work late, I usually spend about 30 minutes listening to music and getting together orders and prep lists. Then I head home, shower and hang out with the family. Health, happiness and family are what matters most.

What’s your food or beverage guilty pleasure?
Totino's Party Pizza is my guilty pleasure. Even if you don't remember eating it, the burns inside your mouth the next day will remind you about how delicious it was — so delicious that you've forgone the cooling process in return for flavor and burns.