LouFest Announces Its 2016 Food Lineup — aka the Nosh Pit 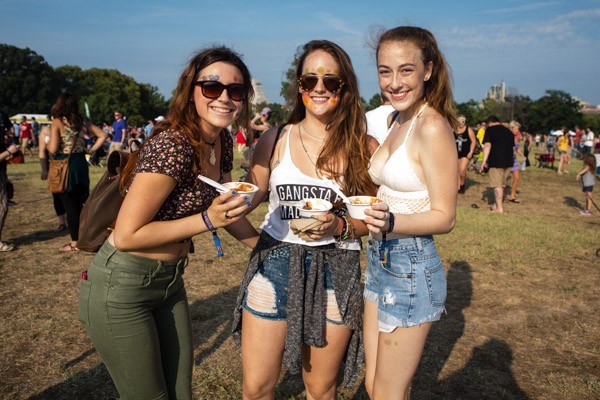 You already know which musical artists are headlining LouFest 2016 — but what about the food?

The LouFest 2016 Nosh Pit lineup has become a tradition for famished festivalgoers, featuring offerings from a number of the area's best restaurants. Chefs serve up popular favorites, as well as a few creations only available at LouFest.

This year, you'd better come hungry. For this year's festival, the Nosh Pit is increasing from the 19 vendors who took part last year to nearly 30 this year — and that's just a small fraction of those who applied. Aya Sofia Restaurant, Ices Plain & Fancy, Evangeline's and Sugarfire Smoke House are just a handful of the food options. You can see the entire lineup and menus on the LouFest website, but others include Salt + Smoke Barbecue, Dewey's Pizza and Steve's Hot Dogs.

Mike Johnson, chef and owner of Sugarfire Smoke House, is preparing smoked meats for the Nosh Pit and a custom menu for the VIP area, which will include meat, seafood and vegetarian-focused stands. He says that LouFest's organizers ensure that the event is enjoyable and worthwhile for the vendors.

"We have a good time making great food for crowds of people who are thoroughly enjoying themselves," Johnson said in a press release.

That courtesy has paid off, as chefs such as Jenny Cleveland of Cleveland-Heath are also returning for another year.

"LouFest is a lot of hard work but fun, too — getting us out of the restaurant and working with everyone else on restaurant row is a great," Cleveland said in a statement. The restaurant owner has a menu of chicken-and-biscuits, kale salad and beignets planned for the festival.

And if you're one of the artists or crew members at this year's LouFest, you haven't been forgotten. Frank Rojas and Jason Tilford of Mission Taco will be providing their MexiCali street food specialties to those working on and off stage.

LouFest 2016 takes place Saturday, September 10 and Sunday, September 11. For tickets and more information, visit loufest.com. (Oh, and in case you're one of the few who missed the announcement on the music side of things, those headliners are Ms. Lauryn Hill, LCD Soundsystem and Chris Stapleton.)