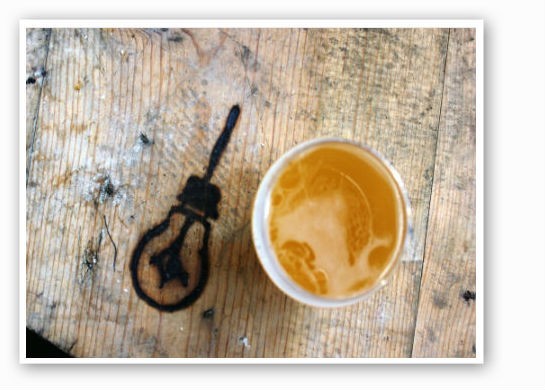 In cartoons, a lightbulb signifies that someone's had a great idea.

But for two craft breweries in St. Louis, the lightbulb has become a sign of controversy — with a lawsuit in federal court alleging that two-year-old Modern Brewery helped itself to the lightbulb logo first employed by three-year-old Side Project.

And the lawsuit suggests the similar logos simply couldn't be an accident. Side Project founder Cory King alleges in the suit that he shared the lightbulb idea with Modern Brewery founder Beamer Eisele even before Side Project's 2013 launch.

On the day King launched his marketing efforts, Modern registered the name "Side Project Brewing" with the Missouri Secretary of State. And then, one month later, the suit contends, Eisele's project, Modern Brewery, unveiled its lightbulb logo.

By May 2014, Side Project alleges it had put Modern Brewery on notice that its logo was likely to confuse consumers. (Several cease-and-desist letters followed, the suit claims.) After all, Modern Brewery's tap handles carry only that distinctive lightbulb and the name of the beer in question — not the name of the brewery itself.


Responding to our request for comment, Eisele says that he and King had conversations about the lightbulb logo — but says he was the one who first made clear he'd be using it. "I developed my lightbulb design at least two years before he first used his and have the documentation to prove it," he writes. "Cory knew I was planning to use a lightbulb design long before he decided to use one."

Eisele says he's attempted to work out the conflict behind the scenes for a few years now — in fact, he says King's lawyer told him in 2013 that it wouldn't be a problem for both breweries to use lightbulb designs.

As recently as last week, Eisele says, he was in contact with King's reps and thought the problem could solved without litigation.

"Cory has apparently hired (and I guess now fired?) several law firms for this matter," he writes. "Three of them have contacted me in the past. The law firm that filed this complaint is the third one I have heard from. Apparently he finally found one willing to sue me."

He adds, "This situation has cost me a lot of time and money and it’s a distasteful distraction for the St. Louis brewing community. I’d love to resolve it as soon as possible."

That's the one thing he and King agree on — but perhaps the only thing. King tells a much different story.

He says he knew Eisele only as an acquaintance; when King was bartending at iTap, Eisele would sometimes drink there. But he knows he had the lightbulb idea first, because years earlier, he'd done a grad school project that involved designing a plan for a future brewery — down to, yes, its lightbulb logo.

The fact that Eisele was also apparently dreaming up a lightbulb design of his own years later, King says, is "an unfortunate coincidence that he won't recognize." But after Side Project launched and spent thousands of dollars trademarking its logo, he says, "We have a lot to protect."

Filed Friday in federal court, the lawsuit is a rare sign of conflict in St. Louis' craft brewing company, which generally makes a point of camaraderie. The St. Louis Brewers Guild was formed to promote the 40+ craft breweries that have sprung up in the city in recent years; its Heritage Festival, held in June, is a showcase for the scene.

Side Project, which is based in Maplewood, has been one of the highest flyers of the area's burgeoning beer scene, winning accolades from serious beer lovers and critics alike. "In January 2016, three of Side Project’s beers released in 2015 were ranked among the top fifty beers released worldwide, out of a field of more than 60,000 beers," the lawsuit notes.

And Modern Brewery, which is based just down the road near St. Louis Community College - Forest Park, has been on a growth tear. In its first year, it tripled brewing capacity, with a tasting room opening last November. A 2015 Feast Magazine profile noted, "As of this spring, Modern’s eye-catching lightbulb-shaped beer taps can be found in more than 75 St. Louis area restaurants and bars."

One of the ironies of the litigation is that, while Side Project has gained wide acclaim, Modern Brewery is actually the larger brewer. King notes with a laugh that he's heard from people suggesting he's suing "the little guy" — "We're smaller than they are!" he says.

He adds, "This is not what I want to do. But unfortunately, it's what we have to do. It's time to resolve this."