Managing partner Brian Michaels says the co-founders of the beloved Rock Hill spot Hacienda Mexican Restaurant — siblings John Rodriguez and Alex Rodriguez de Torres — brought the idea for the new concept to him a year ago. (It was to be called the Wet Burrito, but someone apparently thought better of that game plan.) Michaels then tasked himself with bringing Hacienda's flavors, with a twist of his own, into an under-three-minutes fast-casual setting.

"Choices are the No. 1 thing we concentrated on. You can go anywhere and get the same thing. We wanted to expand that," Michaels says. "We want you to come here 50 times and never get the same thing ... unless you have a favorite, of course."

Michaels says will stand away from the typical fast-food Mexican restaurants because it offers something most chains don't: variety.

At the 1,500-square-foot restaurant, you're likely to be able to try something new each time, whether it's a bowl, salad, quesadilla or burrito. Aside from the standard steak, chicken and ground beef offered by competitors like Chipotle, will also offer shrimp and Michaels' family pork recipe. Refried and black beans, Spanish rice and Michaels' brown rice recipe compliment the protein options, with the option of queso or a warmed and enchilada sauce alongside. For those looking for a meat-free option, (grilled vegetables) are a perfect addition to any plate.

On the flip side of the prep area are five salsa options, a chimichurri and a select blend of cheese.

All in all, Michaels says that offers more than 700 different combination possibilities — and everything is restocked several times a day. Freshness is a paramount ideal.

The majority of options are new recipes from Michaels' culinary background. But don't fret, Hacienda lovers, several of the Brentwood classic recipes made it onto menu.

Michaels, who has been cooking since he was a seven-year-old making food beside his mother, says his background in Hispanic foods made for a rigorous perfecting of the menu.

"This has been the culmination of a lot of people working very hard to bring something new to St. Louis," Michaels says.

Michaels and the Rodriguez brothers hope to open 100 outlets eventually — with plans for six of the fast-casual outlets in the St. Louis area.  The best part of their concept? You don't have to pay extra for queso.

will have its grand opening this Friday, July 8, and will be open weekly from 11 a.m. till 7 p.m. Monday through Saturday.

Turn the page for more photos of Mayana. 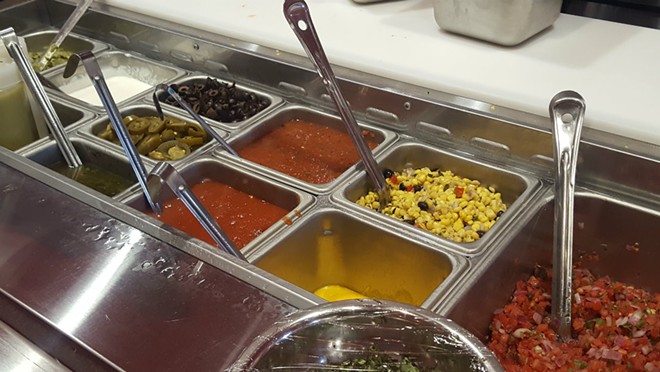