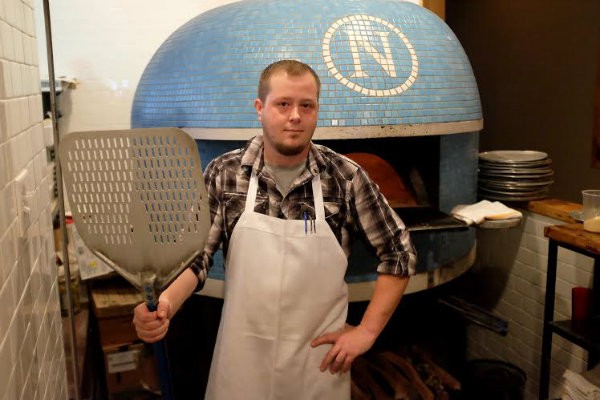 When Tommy "Salami" Andrew of Randolfi's (6665 Delmar Boulevard, University City; 314-899-9221) thinks back to growing up on the Hill, he's amazed that the mom-and-pop shops he frequented as a kid are still thriving.

"I grew up right in the middle of it all," Andrew recalls. "My mom would have me walk down to Missouri Baking Company and have me pick up cannoli or a stollen. I'd go to DiGregorio's market for some bread and deli meat. You could walk down any block and get tasty food — still can. You're just surrounded by it there."


Not surprisingly, Andrew developed a passion for food. From his first restaurant gig at the Italian mainstay LoRusso's to the acclaimed Monarch (where chef Josh Galliano gave him his infamous nickname) and now in his current role as chef de cuisine at Randolfi's, Andrew has always looked to his old Italian neighborhood for inspiration. "It's just all about small family shops down there — even before that was a thing," Andrew says. "Everyone just knows everyone down there. It's a really tight community."

Andrew let us in on a few of his Hill neighborhood haunts — and what to get at each one. Clip, save and use this as your guide to explore the south St. Louis culinary treasure.

1. Gioia's Deli
1934 Macklind Avenue; 314-776-9410
When we reached out to Andrew for his favorite Hill destinations, we couldn't have caught him at a more appropriate time. "It's funny. I'm actually eating a sandwich from Gioia's right now," he laughed. Though most people think of the hot salami as the go-to order at this landmark of a deli, Andrew has another suggestion. "Get the half-hot salami/half-roast beef combination. And make sure you ask for it on garlic bread. Man, it's fantastic."

2. DiGregorio's Italian Food Market
5200 Daggett Avenue; 314-776-1062
"This is just an all-around good market," Andrew says of the grocery store he's been frequenting since his youth. "They have a great deli — I remember getting salami and Provel and bringing it all back to the house. They also have really good marinated olives."

3. Fazio's Bakery
1717 Sublette Avenue; 314-645-6239
After picking up all of that meat and cheese from DiGregorio's, Andrew suggests stopping at Fazio's to complete the package. "This is where we'd go to get fresh bread to make the sandwiches," he says.

4. Milo's Tavern
5201 Wilson Avenue; 314-776-0468
"I'm not sure how long they've been open, but it's way before I was born," says Andrew of the quintessential Hill bar famous for its bocce games. "It's a great neighborhood tavern. Obviously when I was a kid I wouldn't drink beer, but I would go there to play bocce. Now it's where I like to grab beers and catch up with people."

5. Missouri Baking Company
2027 Edwards Street; 314-773-6566
"I love the cannoli and stollen, but what I really remember about this place are the chocolate drops," Andrew recalls. "We'd go there and get them for everyone's birthday. This is the pastry place on the Hill. It's always busy and it's fantastic."

6. Bertarelli Cutlery
1927 Marconi Avenue; 314-664-4005
Though not technically a place to eat, Andrew insists Bertarelli Cutlery is just as important to his kitchen as his raw ingredients. "My buddy works there and goes out of his way to take care of industry guys," he explains. "He knows everyone well. This is a small family shop that gives really great deals of knives — go support them."