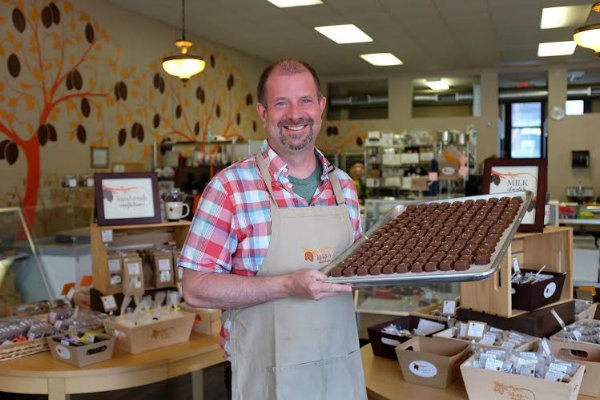 Brian Pelletier of Kakao Chocolate had a successful, twenty-year career in the marketing and public relations field until an off-the-cuff comment changed his life.

"I knew that I wanted to do something different, but I didn't know what that was," Pelletier recalls. "I was at a dinner party and a friend told me she had all of this chocolate equipment and was selling it. As soon as she said it, I knew that was it."

Pelletier was comfortable with the business side of opening his own chocolate shop, but there was one problem: He didn't know how to make his product. Luckily, the friend he bought the equipment from was willing to help and gave him her recipes.

"I have a background in math, so I put her recipes into a spreadsheet and looked for patterns," Pelletier explains. "I played around a bit and realized that there were just a couple of standard rations she was using to make the chocolates. From there, I started getting creative and thinking outside of the box as to what different ingredients I could use to come up with more. I just started playing and immersing myself in chocolate to figure out how things would work."

Pelletier opened his first storefront on Jefferson Avenue in 2009 without any idea of how far he could take his chocolate business. Seven years and two additional stores later (he recently closed the Jefferson Avenue shop), he is both surprised and humbled by the success he's found. He has absolutely no regrets, he says.

"I think the most common things I heard when I went to do this were, 'If I didn't have a mortgage' or 'If I didn't have kids I would totally do this,'" Pelletier says. "You're never going to do it then, because there is always some reason why you're not going to be able to do it. It makes me so sad because there are a lot of people out there who want to take the leap but are never going to. It's a hell of a lot of work, but it's so rewarding to do something for yourself rather than pushing a time clock for someone else."

Pelletier took a break from Kakao to share his thoughts on the St. Louis food and beverage community, the must-try dinner experience in town and why he can't imagine doing anything else than making chocolate.

What is one thing people don’t know about you that you wish they did?
Lots of people know that I own Kakao Chocolate, but they don’t know that I also own Larder & Cupboard, a specialty food shop in Maplewood, where my business partner Cindy Higgerson is general manager and “food huntress,” bringing all kinds of amazing things to eat and cook with to St. Louis.

What daily ritual is non-negotiable for you?
I’d like to say that would be running through Tower Grove Park in the morning, listening to NPR and greeting the day, but I’m not able to do that as often as I’d like.

If you could have any superpower, what would it be?
With things happening at three different stores, I wish I could instantly transport from one place to another.

What is the most positive thing in food, wine or cocktails that you’ve noticed in St. Louis over the past year?
I love that chefs, and even people cooking at home, are focusing on good quality ingredients, using local foods and supporting local farmers. We vote with our money, and when we spend money at farmers markets and local companies, we are voting for more of those things, just like when we spend money at big box stores.

Who is your St. Louis food crush?
So hard to decide! I love Anne Croy’s granola and everything she does at Pastaria and Porano. I think Rebecca Schranz is doing amazingly creative things at Earthbound Beer and I love that she rarely does the same thing twice.

Who’s the one person to watch right now in the St. Louis dining scene?
If you haven’t been to Liz Schuster’s “dinner and a movie” interactive cinema at Tenacious Eats, you really need to check it out. They’re incredibly inventive, the food is wonderful and the experience cannot be compared to anything else in St. Louis.

Which ingredient is most representative of your personality?
We use a local lavender in one of our truffles, and it’s easily one of most popular confections. But because so many people aren’t accustomed to the flavor of lavender, some people think it tastes like soap. (Rest assured, there’s no soap in it.)

If you weren’t working in the food business, what would you be doing?
I honestly can’t imagine working anywhere that doesn’t have a food or cooking component to it.

Name an ingredient never allowed in your kitchen.
At Kakao we don’t use any artificial sweeteners, flavors, preservatives or colors, and I try to minimize those as much as possible at home, too.

What is your after-work hangout?
Honestly, I just enjoy going home after work.

What’s your food or beverage guilty pleasure?
I have weaknesses for ice cream and French fries, and every so often I get a bag of buffalo sauce-flavored pretzels.

What would be your last meal on earth?
A burger and fries from any number of local restaurants that serve them with a fried egg, and where the fries are hand-cut and well-seasoned. With ice cream for dessert, of course.