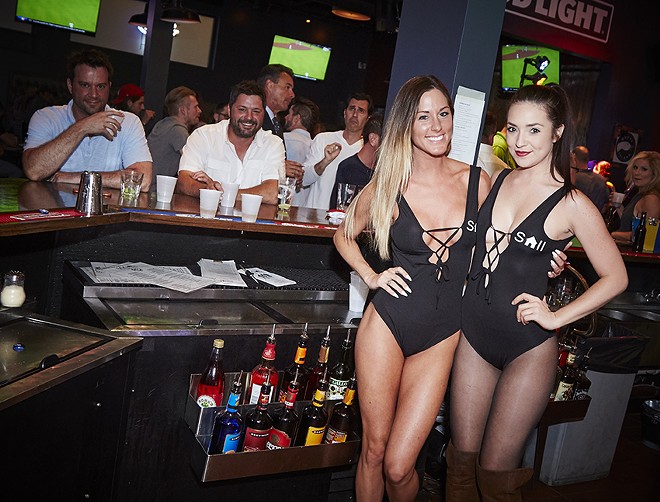 Last Friday afternoon, University City Mayor Shelley Welsch posted on social media that Social House II would be closing its doors after last call Saturday. Her short statement referred only elliptically to the city's lawsuit against the bar — "the parties have resolved their differences" was the extent of it — and city officials declined further comment.


But the terse announcement came after months of drama and legal wrangling over the four-month-old bar, known for its servers wearing pasties and body paint. Social House II had found itself embroiled in a fight not only with city officials, but also with its landlord and one of St. Louis' most prestigious law firms — which accused it in an explosive filing June 10 of lying to city officials and creating shell companies to conceal its true ownership.


Owner John Racanelli vehemently denies the claims in the filing, saying that a lengthy complaint from attorneys at Bryan Cave LLP led to the bar's closure only in one way: It was one more costly battle in a war being waged on far too many fronts.

"How could anyone operate a business the way you should when you are getting attacked by everyone every day for a different reason?" he asks. "Between the street closures, the crime down there and the legal battle on top of the normal every day business fundamentals, we just had enough."

While Social House II opened its doors in March, defying University City officials, it wasn't until June 3 that the bar threw its official grand opening celebration. But in hindsight, the party meant to indicate that "Social House II is here to stay" instead marked the beginning of the end.

The signs were there from the beginning, of course. When John Racanelli announced last winter that he was replacing his failed sports bar, the Market Pub House, with a spinoff of Soulard's Social House, U. City officials argued that it was a dramatic change in use — and that Racanelli needed a new liquor license. They then began to hastily revise the city's code to bar sexually suggestive businesses.

But Racanelli and his always-quotable attorney, Albert Watkins, knew a good First Amendment case when they saw one. They pointed out that other businesses in the Loop had hosted burlesque — how were their servers' costumes any different? And at any rate, it was the same ownership, Watkins insisted, so no new liquor license was needed. Social House II could open whenever it wanted ... and so, on March 4, it did.

For awhile after that, all was quiet — but unbeknownst to patrons, the city wasn't giving up. Behind the scenes, it was doubling down.

Early on in the litigation, the city hired Bryan Cave, one of St. Louis' legal heavy hitters. And as Social House II continued to serve drinks, the firm's attorneys were deposing its principals, subpoenaing records and delving into its ownership structure.

On June 10, the Bryan Cave attorneys filed a detailed, 37-page brief in St. Louis County Circuit Court, alleging that Racanelli wasn't the bar's true owner — by insisting in city paperwork he owned 100 percent of the business, they wrote, he'd used a "shell game" to deceive both the city and the legal system.

In essence, they alleged, all day-to-day operations since February 10 had been managed by a company called HRM, and all proceeds were going into its coffers. That company, the Bryan Cave attorneys wrote, was a joint operation between longtime nightlife impresario Anthony "Tony" Trupiano (whose sister owns the original Social House in Soulard) and hotshot criminal defense attorney Scott Rosenblum, in partnership with a woman named Amy Kostecki.

The court was scheduled to take up the petition on June 17. Faced with its lengthy allegations, hundreds of pages of exhibits and just one week to ready a response, Racanelli's lawyers asked Judge Nancy Watkins for more time.

On Monday, June 13, she denied the request. The hearing would go on that Friday.

Racanelli, Rosenblum and Trupiano all vehemently deny Bryan Cave's assessment of the ownership situation. In essence, they say, Racanelli owned the business, but was licensing the Social House name and franchising the concept. Trupiano says HRM was the "management company" hired to operate the place; Rosenblum says he was merely an investor in that management company. (As for Trupiano, he says he wasn't even aware that he was ineligible to have his name on a liquor license. If that's all this was about, he says, why didn't he just use his sister's name, or another family member? After all, the original Social House operates just fine.)

"They made a mountain out of a mole hill," Rosenblum says of the allegations. "It's really simple. I made a loan because I wanted to see if [Social House] was a franchisable situation. And I think it is a franchisable concept. The only problem is that University City wanted to spend $500,000 to put us out of business."

Adds Trupiano, "They tried to portray us like a bunch of gangsters — 'shell game,' like we were bad people. We were up front about our involvement! I'm out there shaking hands, busing tables — I wasn't hiding anything. You want to know who the gangster are? These people at City Hall. They're taking your money and spending it for no reason!"

University City Manager Lehman Walker declined to comment on the city's reasons for pursuing the litigation. He confirms that he earmarked $300,000 for Bryan Cave's representation, although the final bills haven't been tallied.

Regardless, in light of the lengthy petition and the rapidly approaching hearing, Trupiano and Racanelli says they decided to reenter settlement talks — and a deal was reached not long before the scheduled hearing on June 17.

But they were still shocked when friends began to call later that afternoon, saying they'd just seen a an RFT story citing the mayor's announcement on social media. No one was supposed to be putting the news out there, they say, on either side. "She breaks the contract before the ink was even dry," Trupiano marvels.

The battle in court wasn't the only one Trupiano and Racanelli were fighting in recent weeks. Talk to them about the case, and it's clear they're equally wound up about the battle they found themselves in with Social House II's own landlord.

Racanelli's landlord, Dan Wald, has extensive holdings in University City — and found himself in the hot seat with his peers after Racanelli closed Market Pub House and landed on the idea of reopening as a Social House spinoff. But according to Trupiano and Racanelli, the awkward relationship turned downright hostile in the bar's final weeks of operation.

In fact, two weeks ago, Racanelli came in to work to find the Social House II sign had been taken down. Reviewing security footage, he says, he was shocked to see his own landlord, with another man, up on a scissor lift removing it. (Wald did not respond to an email seeking comment yesterday.)

Ultimately, Racanelli says, "we're going to have to settle our differences with him." But he confirms he won't be reopening on site. He's moving on.

And Trupiano and Rosenblum are as well. They say they've gotten interest in Social House franchises in other cities.

For all its troubles in University City, the bar didn't lack for customers — Trupiano estimates sales tax alone tallied $7,000 to $12,000 a month. The partners say they've gotten interest in Nashville, in Las Vegas, even in Columbia and Alton.

"I'm sure they'll write their little ordinances like Richmond Heights tried to do," Trupiano says, referencing the municipality that, inspired by University City's travails, proactively passed a new law that would ban businesses like Social House. But, he adds, that shouldn't be a problem: "We follow the state law. We're not doing anything illegal."

Editor's note: The author of the story is married to an employee of Bryan Cave. The firm got involved in the litigation after she was already covering the story; her husband has no involvement in any part of the case.