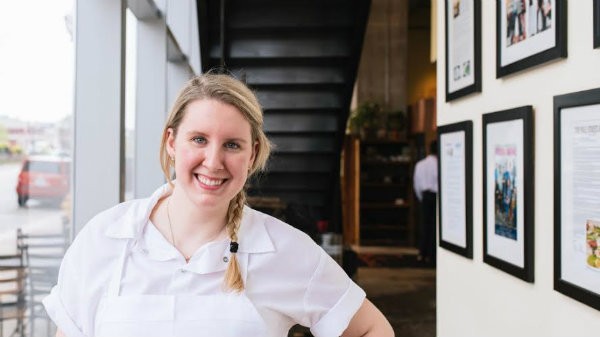 When asked why she went the sweet route instead of savory, Sarah Osborn, the executive pastry chef for the new Gerard Craft restaurant Sardella (7734 Forsyth Boulevard, Clayton; 314-773-7755), doesn't hesitate. "Everybody is really excited when you hand them a cookie," she explains. "No one is going to say, 'No thank you.' I'm a people pleaser and sweets do that. Carbs just make you happy."


Osborn has been making people happy through her desserts for as long as she can remember. Raised in St. Louis, she fell in love with cooking at an early age because of her mother. "I grew up in a house where my mom cooked every meal seven days a week," recalls Osborn. "She was an excellent cook. She's the one who taught me everything — but she can't bake to save her life."

But while her mother wasn't able to whip up pastries, she knew talent when she saw it. When Osborn was a senior in high school, her mom encouraged her to go to culinary school. Osborn took her advice began working at Sunset 44 in Kirkwood. She was then accepted to the Culinary Institute of America in New York when she was just eighteen. This led to a job in New York City, an internship in London and a summer working in the Hamptons.

Osborn returned to St. Louis the fall after she graduated from the CIA and was offered a chance to stage for Gerard Craft at Niche. She landed the job and worked her way up from assistant to the pastry chef to garde manger, but she found much more than a fulfilling career at the restaurant.

"It's where I met my husband," Osborn says, referring to her spouse Nick Blue, who had been the executive chef at Craft's Brasserie, very briefly served in that role at Niche and will take that same title at Sardella when it opens next month.

"It's a funny story," she continues. "Apparently on the first day of my stage Nick called dibs on me. He asked me out on Facebook but I ignored him for nine months. Eventually, we were working a station together and he just won me over."

Sardella will be represent the third time Osborn and Blue have worked together, "surprisingly without killing each other," she laughs. The pair are currently in the process of doing research and development on recipes for the forthcoming restaurant, though don't expect her to try to improve upon her mother — the non-baker's — excellent birthday cake recipe.

"My mom makes my birthday cake every year," Osborn explains. "It's a chocolate cake with chocolate frosting that's almost like fudge. It's so simple and so, so good."

Perhaps that baking gene did come from her mother after all.

Osborn took a break from the kitchen to share her thoughts on the St. Louis food and beverage community, her not-so-secret food crush and the simple meal that is near to her heart.

What is one thing people don't know about you that you wish they did?
I lived in Texas for a few years as a kid, so I have a deep love of Taco Cabana, bluebonnets, and Shiner Beer.

What daily ritual is non-negotiable for you?
My daily iced tea with lime.

If you could have any superpower what would it be?
The ability to instantly heal! No more burns covering my arms!

What is the most positive thing in food, wine or cocktails that you've noticed in St. Louis over the past year?
Since the announcement of Niche closing, there has been such an outpouring of love from the entire food community in St. Louis. Over this last year, and especially these last two weeks, I have really been able to see how amazing the hospitality community in St. Louis is, front and center. This isn’t specifically food, wine or cocktails, but it is more of everyone and everything.

Who is your St. Louis food crush?
Well, the new Executive Chef at Sardella, Nick Blue, is pretty cute.

Who is the one person to watch right now in the St. Louis dining scene?
This may be biased, but honestly, Nick Blue. I can't wait for people to see what he is doing at Sardella.

Which ingredient is most representative of your personality?
Sugar.

If you weren't working in restaurants, what would you be doing?
I honestly have no idea. Something creative or a dog walker.

Name an ingredient never allowed in your kitchen?
Swiss cheese. I just can’t.

What is your after-work hangout?
"Casa Blue." A beer, my husband, our dog, and our sofa. Can't beat it.

What's your food or beverage guilty pleasure?
Puffy Cheetos. I have an undying love for them.

What would be your last meal on earth?
BLT, corn on the cob, and a very cold beer. And nothing fancy for the BLT: toasted white bread, mayo, tomato, lettuce and salt. It is my absolute favorite.